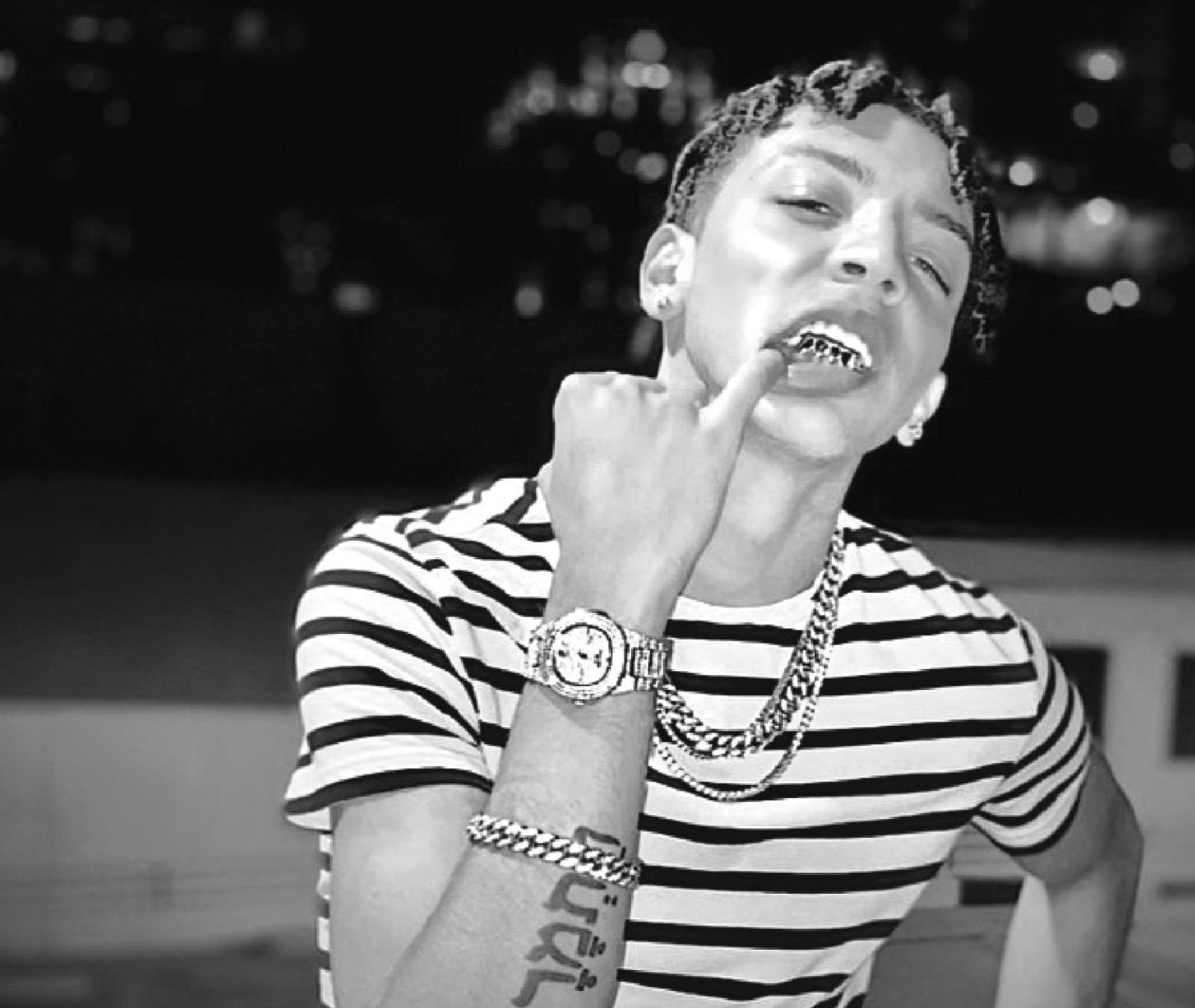 San Marcos’ own Bennie Cherry, a.k.a. BC the Ice God. Submitted photo 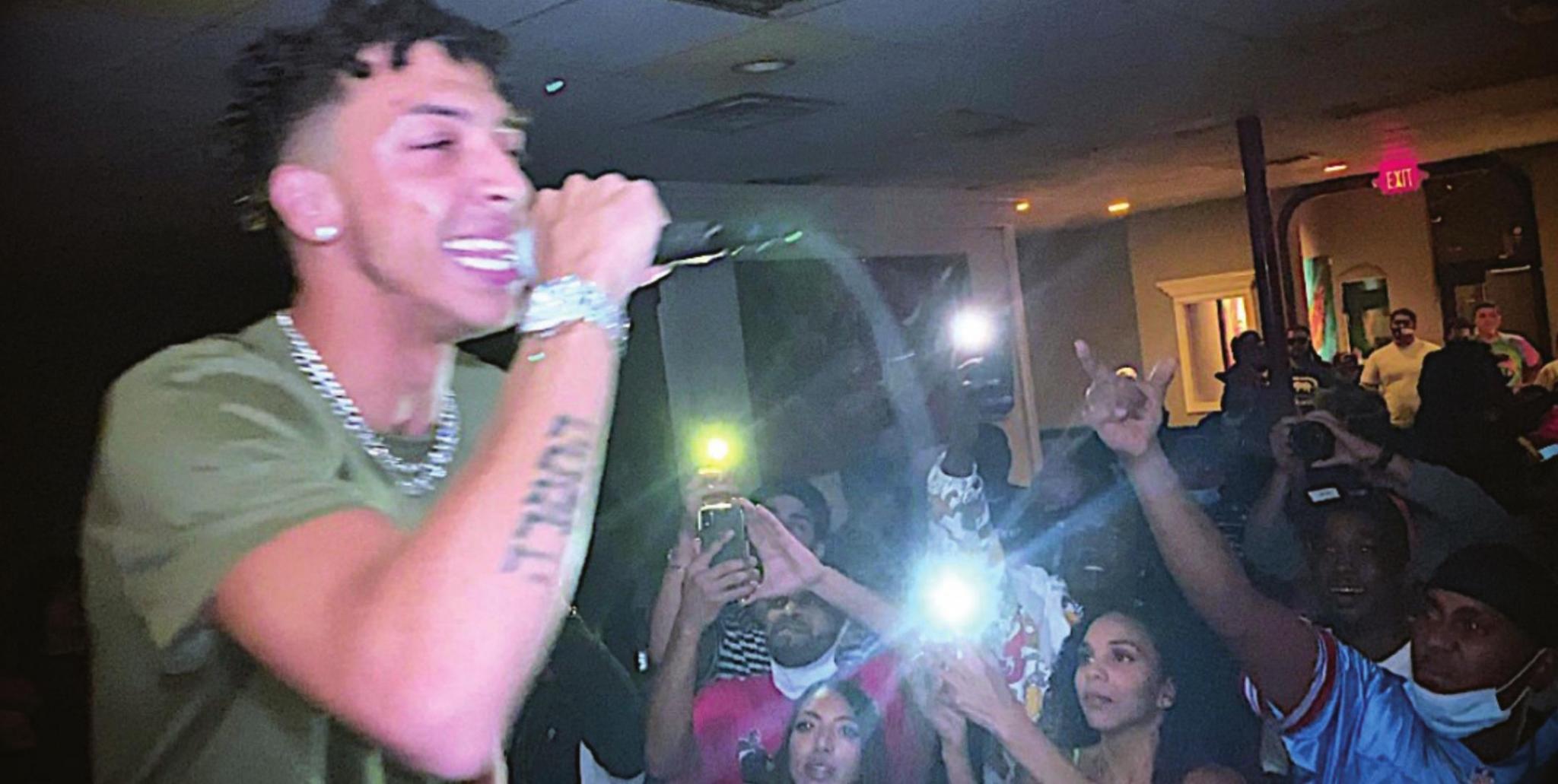 Froze means, “Water in its rock-solid form.” BC performs for a packed house at LongHorn Daquiris, a venue that supports local artists. “When someone can feel your energy and then take that energy and apply it to something for them, that’s just the greatest blessing.” Cherry said.

With BC’s first project, Froze Vol. 1, he achieved the certified rank of one million streams on Spotify. Find BC’s music there and on Apple Music, Soundcloud and YouTube as well. 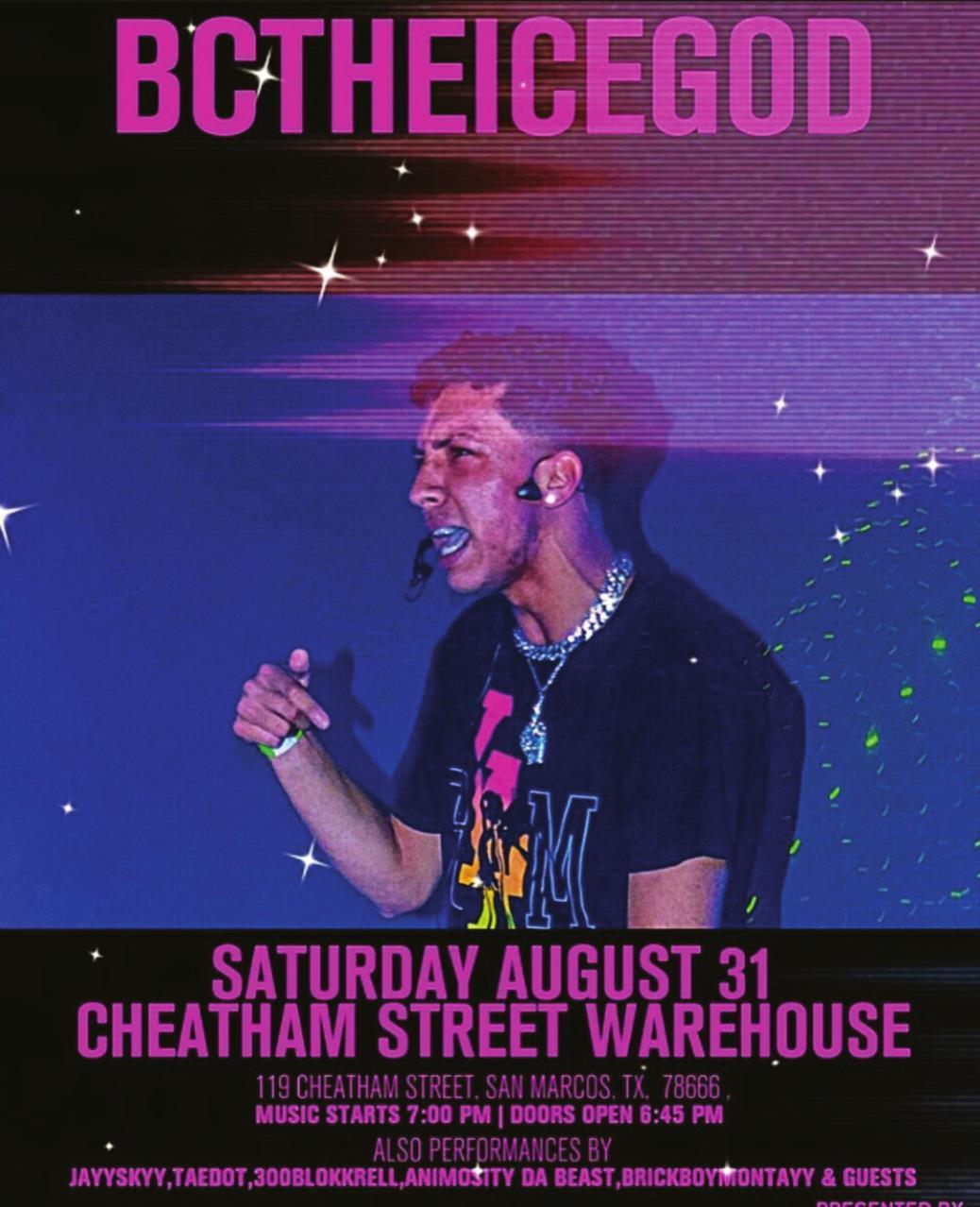 BC the Ice God is the first rap artist to headline a show at the San Marcos’ historic Cheatham Street Warehouse. “Their sound system is amazing.” Photos submitted by Bennie Cherry

Bennie Cherry moved to San Marcos from Las Vegas in second grade, where he attended Crockett Elementary before the new building was built. He grew up alongside his classmates, earning Crockett Cash and getting involved with sports. Like many San Marcans, Cherry played basketball under Coach Charles Austin, who told Cherry that on the court, he had ice water in his veins.

During Cherry’s senior year in 2016, Austin upgraded the name to the Ice God, which would come into play over the course of the next few years as Cherry shifted his focus from basketball to hip-hop.

“Charles had a big impact in my life,” Cherry explained as he spoke about his experience at San Marcos High School and his original decision to follow dreams of playing basketball at the college level. Soon after, though, Cherry made the decision to follow his natural talent and passion for music. Since then, events progressed so quickly, he’s never had the chance to look back. His first solo project, Froze Vol. 1, blew up unexpectedly, scoring Cherry — aka BC the Ice God — a the certified victory on Spotify with one million streams.

“I didn’t expect Froze Vol. 1 to blow up like it did,” Cherry said. “It’s crazy. It just happened out of nowhere.”

But Cherry didn’t rest upon that success. A goaloriented person, he pushed into action, creating his own independent recording label, Froze Entertainment, in which he and other local hip-hop artists create and collaborate in the San Marcos-Austin music scene.

“I’m so much further than I thought I would be right now,” Cherry said. “When you’re aligned with what you’re supposed to be doing, what you were put here to do, you’re literally dominating your path.”

Cherry — whose music brand boasts a broad range, from lyric-heavy rap, radio records, to slow jams — comes from music on both sides of his family. His maternal great grandfather played drums for Barry White. His Dad played the 1985 Grammys with the award-winning rock band, The Flamingos.

In addition to Cherry’s tight songwriting skills, Cherry has a powerful, fluid baritone that gives his music an added, unexpected edge. Not only can he rap really fast, this kid can sing.

Jerry Doby, Editor-in-Chief of The Hype Magazine described Cherry’s work on Froze Vol. 1 as, “A nice mix of sounds from all ends of the spectrum,” adding that, “BCtheIceGod is a new find for us, but his project offers something for everyone, and he’s got the potential to do something big in his lane.”

In truth, however, Cherry’s plans encompass more than that. As a true artist of the present day, Cherry sees the ability to inspire and connect to people through music as the greatest opportunity he can seize.

“I decided to use my platform to influence people in a way that changes the world and pushes people to become the best version of themselves,” Cherry said. “That’s what Froze means: Ice is water in its rock-solid form. This is what I want my fans to become.”

Even though the pandemic has curbed a lot of creative endeavors, from concerts to live performances, Cherry has taken to his social media platforms to interact with his steadily growing fanbase. He hops on Instagram Live every morning to give motivation and to remind everyone that they don’t need validation from other people in order to be themselves.

As a spiritual person, Cherry actively fosters that philosophy in his music, in his creative process, within his personal life, and with his fans, as well.

“Everything is doable,” Cherry said. “I want to be that motivation: If he did it, why can’t I? When it comes to your purpose, to your passion, it has to be natural. Because when you love what you do, it’s never work.”

Following the success of Froze Vol. 1, Cherry gained a fanbase throughout the big cities in Texas, especially in Austin, where he was able to participate in his favorite part of the creative process: Live shows.

“I love performing,” Cherry said. “I like to leave everything out there on the stage.”

One of overall Cherry’s goals as an artist is to reach out to every one of his listeners, to encourage them and let them know they’ve been heard.

“We’re in a day and age where you should be connected,” Cherry explained. “Back in Eminem and Dr. Dre’s day, people just knew them as an artist. They didn’t have social media. They didn’t interact with their fans. I remember being a kid and tweeting to my favorite rappers, hoping to get a response. So now that I’ve built a fanbase, and I have people consistently reaching out to me, I make it a point to hit every fan back. I want to acknowledge everybody. ‘You’re a fan and I love you.’”

Though the hip-hop community in San Marcos is still relatively small, Cherry stands on the brink of breaking it wide open. In August 2019, BCtheIceGod was the first rapper to headline a show at the legendary San Marcos venue, Cheatham Street Warehouse. His long-term plans include expanding his label to Houston, where the hiphop community is larger and more widely respected.

“Houston is a totally different scene,” Cherry said. “I want to take the vibe that they have there and bring it back here. We have South by Southwest. We have ACL. We want Austin and San Marcos to be respected as a hiphop community. If we can get everybody supporting each other, everybody on the same mission… I feel like we can do some really, really, really big things.” While Cherry focuses

While Cherry focuses on that larger goal, he’s also honed in on the ones closer to home. Currently, he’s working on his second album release, Froze Vol. 2, with producers DJ Watchman and SwagB, who supply him with beats. As an independent artist, Cherry studies the business side of producing music and the creative process as well. He understands the pitfalls of signing with industry labels, and says he hopes to avoid that for as long as possible.

“I want to be in control of the process for as long as I can,” Cherry said. “It’s a huge process, and I feel like I’m winning because I’m in control. I can’t just sign it all away.”

At the moment, Cherry will continue to build his creative endeavors within Froze Entertainment, signing local artists, hiring producers, editors, videographers and photographers so that they can keep making their music in-house. Further into the future, he hopes to open an indoor gym to start his own amateur athletic union basketball team, perhaps as a way to repay the influence of Charles Austin and the people with whom Cherry played as a student.

“I definitely plan on doing a whole lot for the area,” Cherry said, making sure to shout out to the San Marcos venues who have supported him and other local hip-hop artists along the way: The Vault, LongHorn Daiquiri, Cheatham Street Warehouse and the Texas Gamer’s Lounge. “When someone can feel your energy, and then take that energy and apply it to something for them, that’s just the greatest blessing.”

BCtheIceGod’s next show will be March 28 at Come And Take It Live in Austin, on Riverside. To hear his music, check him out on Spotify and Soundcloud at Bctheicegod or on YouTube at BCTHEICEGOD.