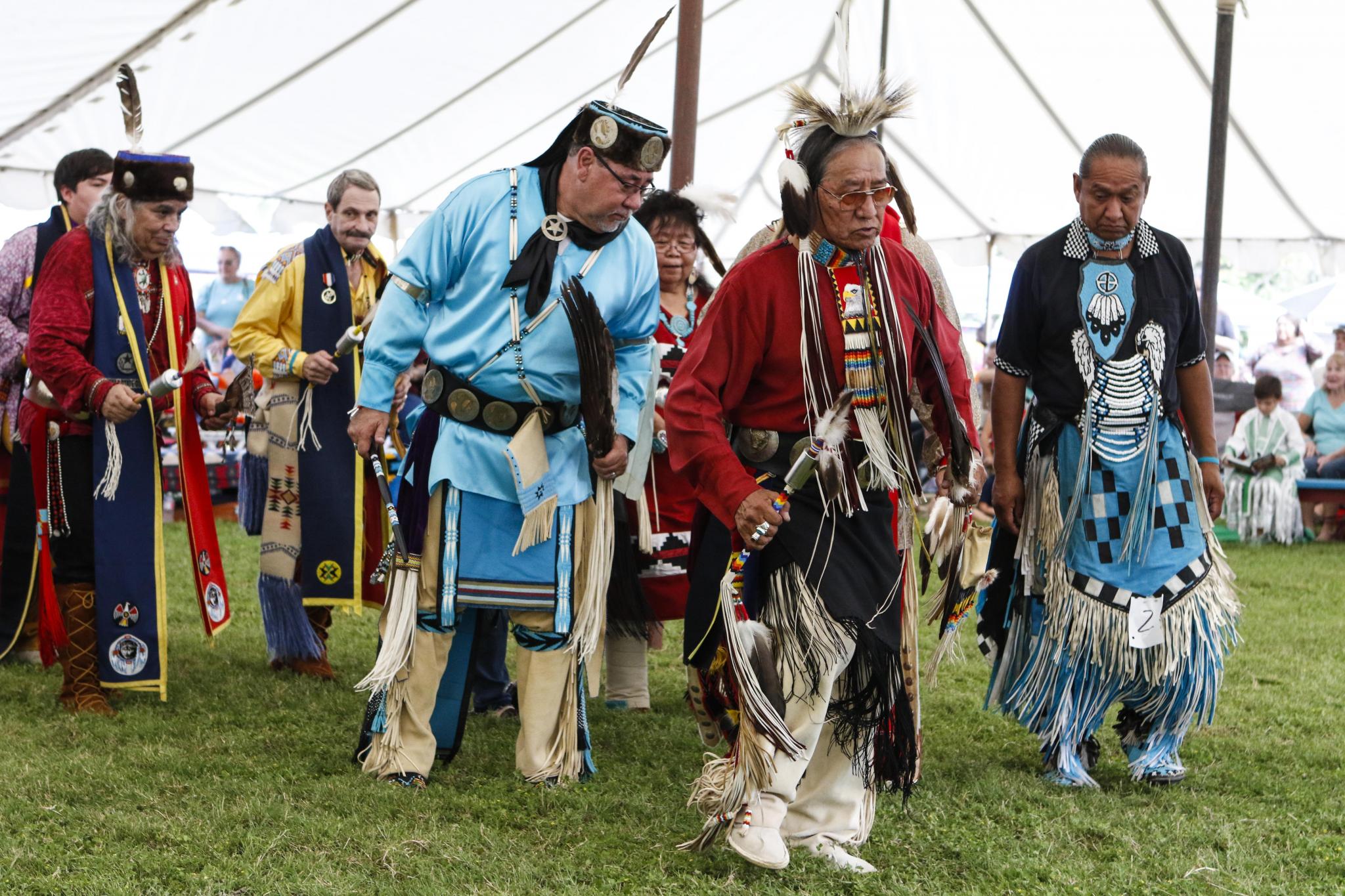 In 1995, when local music legend, attorney, and entrepreneur Lucky Tomblin produced the Sacred Springs Powwow in San Marcos, Native Americans in Texas knew they had a home where the culture of the First People of the Americas was welcomed, celebrated and valued. Fifteen years later, the powwow’s standard was raised again by the Indigenous Cultures Institute, when representatives from the nonprofit visited Tomblin and his wife Becky and asked permission to reinstate the Sacred Springs Powwow as an annual event. Now in its ninth year, the powwow is scheduled for Oct. 19 and 20 at the Meadows Center for Water and the Environment. 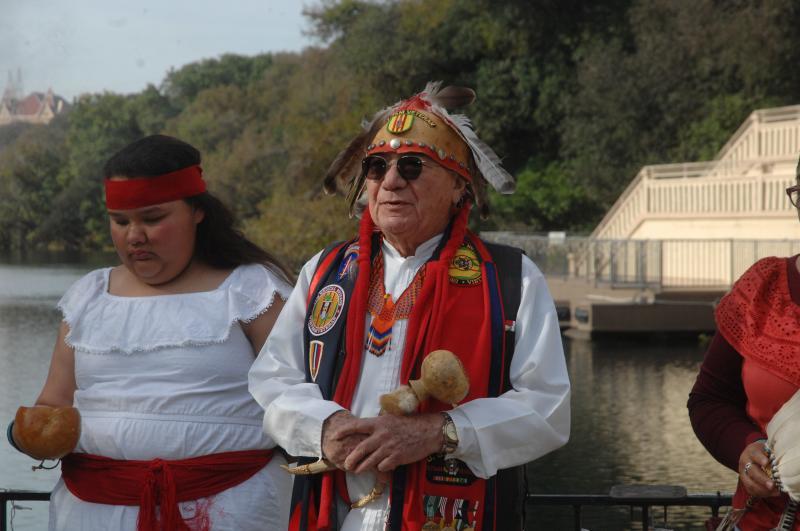 Dr. Mario Garza opens a blessing held on the shores of Spring Lake prior to the start of the Sacred Springs Powwow in 2018. The powwow will begin both mornings with a blessing.

“Lucky Tomblin was a good friend to our people,” said Dr. Mario Garza, the Indigenous Cultures Institute’s board of elders chair. “He and his wife immediately supported our efforts and the Tomblin family has been an abiding source of inspiration and support all these years.”

The name “Sacred Springs” was important to the Miakan-Garza Band of the Coahuiltecan people — a state-legislature recognized tribe of Texas and founders of the Indigenous Cultures Institute — because tribal members who practice traditional ceremonial ways believe that the area at Spring Lake is their origination site, the place of their creation story.

“We believe that we came out of the underworld through a portal at the San Marcos springs and came up onto Mother Earth as The People,” Garza said. “And we also believe that our creation story is documented on a 4,000-year-old rock painting called the White Shaman panel, near Comstock, Texas.” 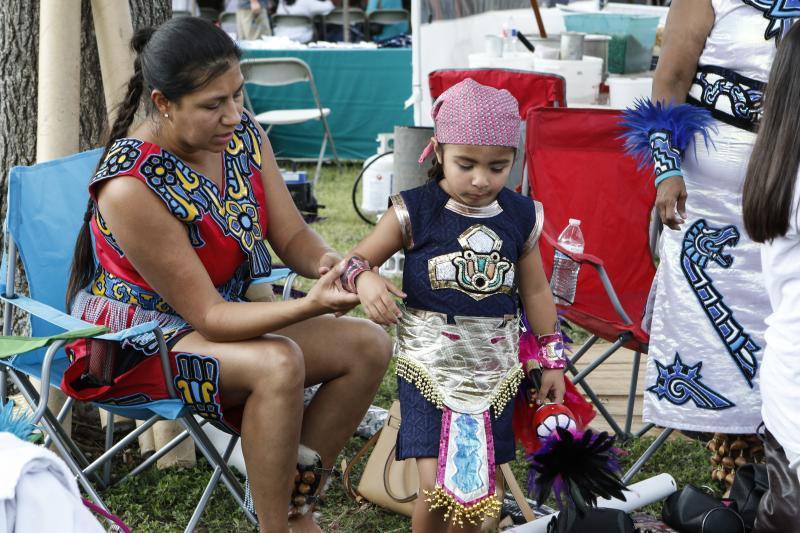 Azucena Flores straightens Natalia Martinez’s Aztec regalia as the group of Aztec dancers prepare for the Grand Entry into the Powwow Arena Tent during the 2017 Sacred Springs Powwow.

Dr. Garza presents an annual lecture on the White Shaman panel and the Coahuiltecan people’s creation story, at the powwow’s Native Culture tent. Several presentations are scheduled for this educational tent including Danza lessons by Mitotiliztli Yaoyollohtli, the nationally famous group that recently performed for a Chickasaw Nation festival. Luis Cuervo, of the Lipan Apache, liaison between the Kuna Tribe in Colombia and the powwow, will explain how the unique, colorful, artistic shoes that he brings are sacred items that represent the culture of people who live over 3,800 miles away. Back this year is Marika Alvarado, of the Lipan Apache, who will present more information on the healing plants of Texas and the Spring Lake area. Special guest speaker Hauli Sioux Gray, of the Ponca and Tonkawa, and the powwow’s head lady dancer, will present a heart-rending and inspirational story about cancer survival.

In a partnership with the San Marcos Cinema Club and part of the Lost River Film Fest scheduled for Oct. 17 – 20, the Sacred Springs Powwow will screen the award-winning film “Warrior Women.” This documentary examines the story of mothers and daughters fighting for indigenous rights in the American Indian Movement of the 1970s. The film unveils not only a female perspective of history but also examines the impact political struggles have on the children who bear witness. The Cinema Club and powwow representatives hope to bring some of the principals of the film for a talk-back with the San Marcos audience. The film is scheduled at the powwow at 1 p.m. on Saturday, Oct. 19 in the Meadows conference room. 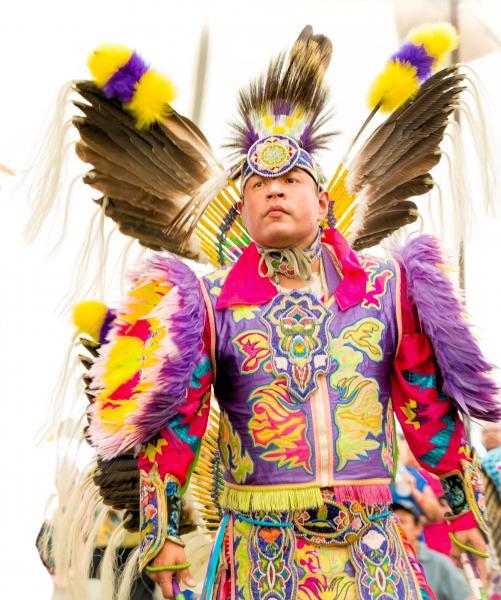 Cecil Gray, of the Cheyenne/Kiowa, in full regalia. Gray and his wife Hauli Sioux Gray (not pictured), of the Ponca/Tonkawa, will be the head man and head lady dancers at the 2019 powwow. Submitted photo

The powwow will continue to exhibit over 100 Native American dancers who compete for best performers, and up to 50 vendors with indigenous arts, crafts and foods. A Youth Art tent will provide craft projects sponsored by Tandy Leather and will welcome all children to learn and earn an art piece.

The Sacred Springs Powwow is funded by the City of San Marcos Arts Commission, the Tomblin Family Foundation, Texas Commission on the Arts, Austin Community Foundation and Friends of the Powwow. Sponsors of the powwow include the Meadows Center for Water and the Environment, Affordable Golf Carts, San Marcos Consolidated Independent School District, Starbucks and IronRoots, Inc.