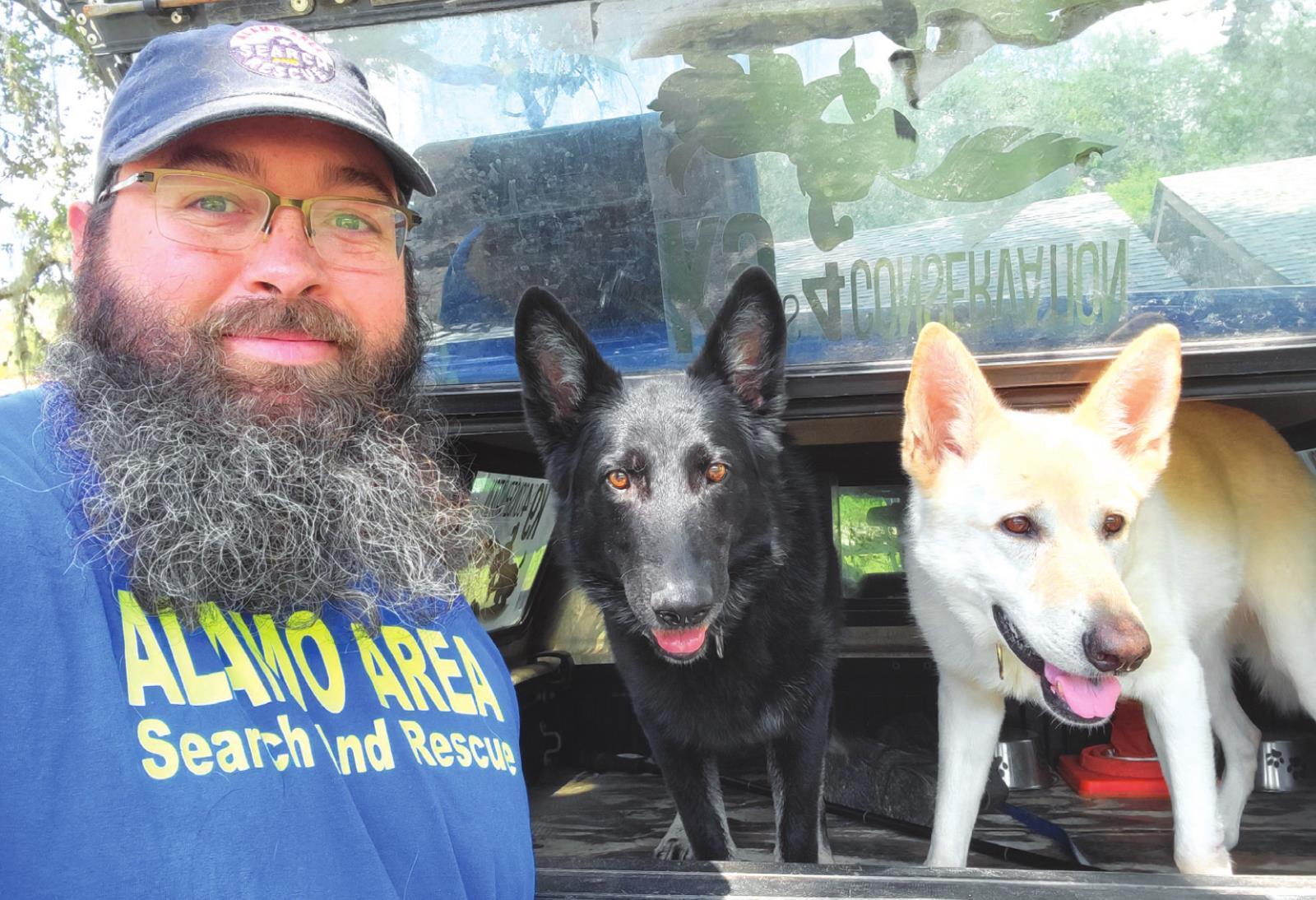 Canine Heroes: Fritz and his rescue dogs work together to make the world a better place

Sun, 09/12/2021 - 5:00am
Celeste Hollister
Features Editor
@celestecook74
chollister@sanmarcosrecord.com
Sunday, September 12, 2021
“They love to use their noses. I wake up in the morning and put on my boots, and the dogs go absolutely nuts. We get to help people, and of course, the dogs help me too.” – Christian Fritz, U.S. Air Force intelligence collector

When San Marcos resident Christian Fritz returned stateside from his time as a U.S. Air Force Intelligence collector in Afghanistan, he missed having a mission on which he could focus. With the help of Saul and Starbuck, his two rescued search and rescue dogs, Fritz has found his calling.

“When I got home, whatever I was doing, it was to make someone else more money,” Fritz said. “It wasn’t enough for me. Search and Rescue is a way to have a mission again that is bigger than myself.”

Since childhood, Fritz has loved dogs and wanted to adopt one, but with his military deployment and subsequent work as an independent contractor, he felt that his mobile lifestyle wouldn’t be in the dog’s best interest.

Things changed, however, when Fritz applied to the doctorate program at Texas State University, where he would have a more permanent address in San Marcos.

“When I started grad school, I was like, ‘I’m not going out of the country for a little bit,” Fritz said, which is when he rescued Starbuck. “I immediately realized she was smarter than me,” he said, which led him to training her as a search and rescue dog. “I tried her out and she loved it, so we’ve been doing it ever since.” Search and Rescue already fit well into Fritz’s existing wheelhouse of skills. In addition to his experience as an intelligence collector, he has a private pilot’s license and wilderness survival training. “It all comes in handy,” Fritz said. “It was really helpful to have that training.” 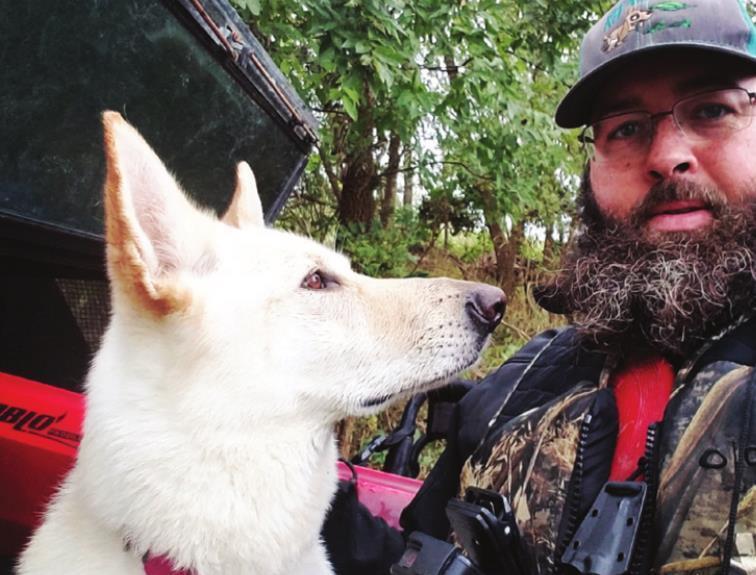 Fritz first adopted Starbuck while still living in Utah, where they became involved with the Utah Search Dogs team. About six months later, Fritz adopted Saul and began in earnest to train both dogs in their own distinct certifications: Starbuck is a human remains detection dog, and Saul, a wilderness area search dog. He invested over 12 months before earning his initial search and rescue certification with his canine partners and continues working the dogs upwards of 10 hours a week on ongoing training.

Upon moving to San Marcos, Fritz and his dogs became involved with the Alamo Area Search and Rescue team in San Antonio.

“Around here, we get called out for murder investigation, so we have been using Starbuck a lot,” Fritz explained. “Sometimes we’re called upon to look for a body, and sometimes for parts, for lack of a better word. Dogs can find very small amounts of human remains in a small amount of time. You can be looking for something as small as a human tooth. It’s astronomical how good their noses are.”

Search and Rescue dogs like Starbuck also work to find missing persons, and can do so with incredible speed and accuracy. “If we have a ‘last seen’ on a person, even up to a few days, we can put a tracking dog on them,” Fritz said. “That’s the fastest way to get to them. This is particularly useful for things like when people get lost when hiking or camping. Area search dogs can cover very large areas in a short amount of time.”

According to Fritz, in order for dogs to obtain Search and Rescue certification, they must be able to find two people in 160 acres in less than three hours. “If they fail that test, then we’re not allowed to deploy the dogs. It’s not a small area, and that’s a short period to do that in.”

In addition to tracking and rescuing people, dogs can be used to help wildlife as well. That’s where Saul, a wilderness rescue dog, comes in. 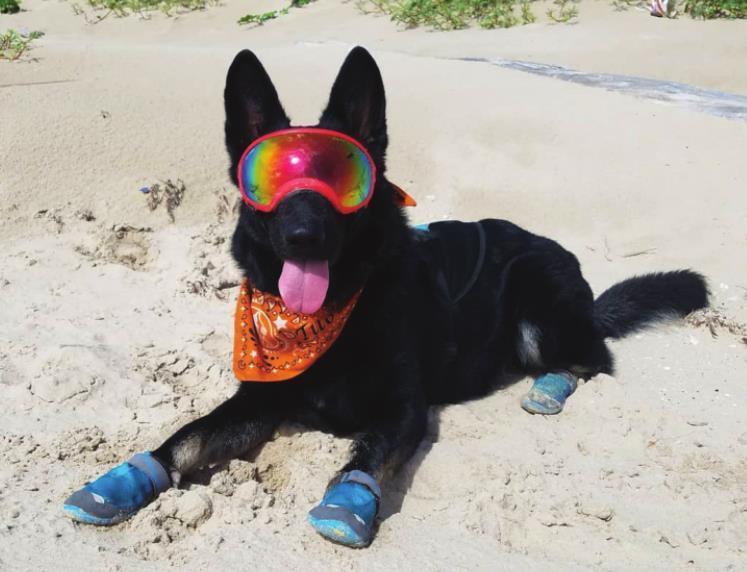 “Saul is trained to find sea turtle nests,” Fritz said. “During the cold snap in February, we went down to Corpus Christi to look for cold-stunned sea turtles.” Because the temperature of the Gulf dropped so dramatically — from 80 degrees to 40 degrees in two days — many of the sea turtles suffered a life-threatening shock to their system. “Since they’re cold-blooded creatures, they can’t move. They’ll eventually drown. That was the worst cold-stunning event ever recorded. Saul was able to find the ones who washed ashore, and rescued about 45 of them.” 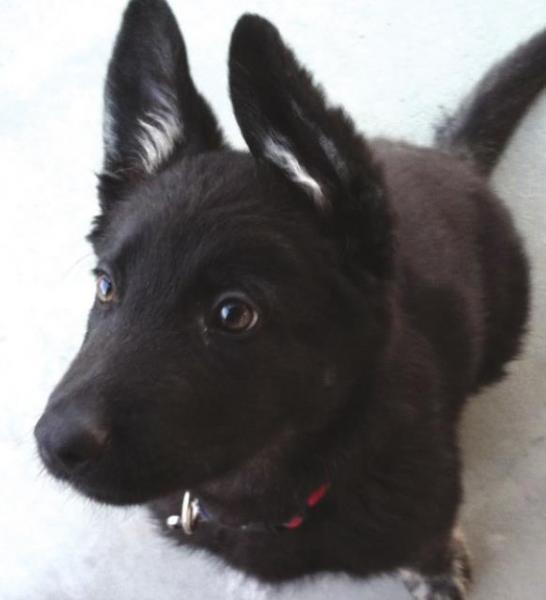 Saul is a certified wilderness area search dog who was also trained to find sea turtles and sea turtle nests for a conservation project on the Texas Coast. Photo submitted by Michelle Cheesman, Sturges Word Communications

The Alamo Area Search and Rescue is a volunteer-based organization that provides free search and rescue resources to public safety agencies in Texas. AASAR is currently holding a fundraising campaign that coincides with the American Humane Society’s National Service Dog Month and VFW’s #StillServing campaign, which honors veterans and their canine counterparts who continue to serve after active duty.

AASAR will hold a corn-hole tournament — a Cornament — on Nov. 6 at the San Antonio VFW Hall, 8765 1560 N, beginning at 12 p.m. For information on donating and participating, check their website at alamoareasar.org/

“Raising funds and awareness for equipment and training,” Fritz said. In addition to training, equipment such as radios and GPS collars for the team of search dogs are needed to help the team complete its missions.

In addition to raising funds for Search and Rescue, AASAR and the #StillServing initiative hope to extend awareness to the community about the importance of canine companions within the community. 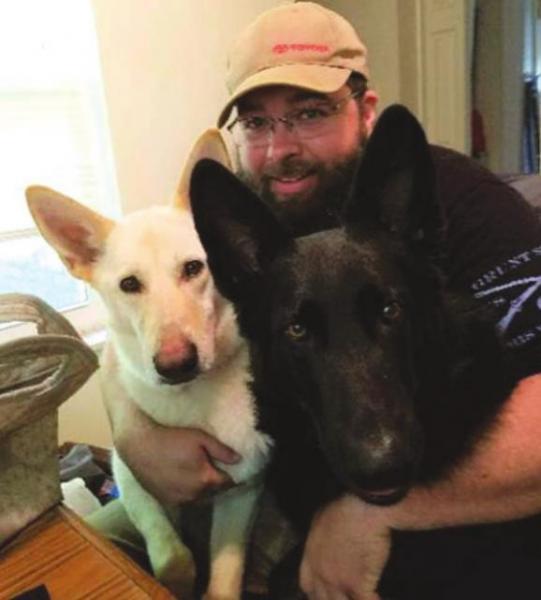 San Marcos resident Christian Fritz and his search and rescue dogs, Starbuck (L) and Saul (R), have been recognized as VFW #StillServing Heroes for service to the country and community. Photo submitted by Michelle Cheesman, Sturges Word Communications

“Dogs often have a special bond with humans, and are even called ‘man’s best friend’ because they mean so much to us. Often, that’s a result of how much they do for us and alongside us,” stated Fritz Mihelcic, VFW National Commander. “Veterans value the experiences they have with dogs whether that’s as a service member or in the workplace or their personal lives after transitioning out of the military.”

Fritz concurred with this statement, saying that roughly 60% of those volunteering for Search and Rescue programs are military veterans. He also talked about the ways in which dogs help humans beyond the scope of law enforcement, as emotional support animals, therapy dogs and for crisis response.

“They amaze me every day,” Fritz said. “Dogs can smell when your blood sugar is too high or too low. They can detect COVID-19. They’re better than our current tests. They can smell cancer. The U.S. military spent hundreds of thousands of dollars on research for detection of explosives and they didn't find a better answer. Dogs are still the best way to do it.”

Fritz went on to talk about how the San Marcos Police Department utilizes crisis response dogs within their Mental Health Unit.

“They can be deployed to help someone who’s having a mental break,” Fritz said. “They’re specifically there to help. [It’s] An incredible use of dogs. The San Marcos Police Department is a very forward thinking police organization. Like even having a mental health unit. There are ginormous cities that don’t have a mental health unit, and our little town has one. They do a lot of really good stuff.”

Fritz’s passion for dogs becomes even more apparent as he talks about what the dogs get out of doing the work of Search and Rescue. “They love it,” he said. “They love to use their noses. I wake up in the morning and put on my boots, and the dogs go absolutely nuts. We get to help people. Of course, the dogs help me too. They're completely loving, they’re a ton of fun. On your worst day when you don’t want to do anything, the dogs know when you’re having a bad day. They come and commiserate. Life is much better as a dog handler. The dog is an incredible tool and partner. Basically,” he adds, “dogs are better than us, and we don’t deserve dogs.”