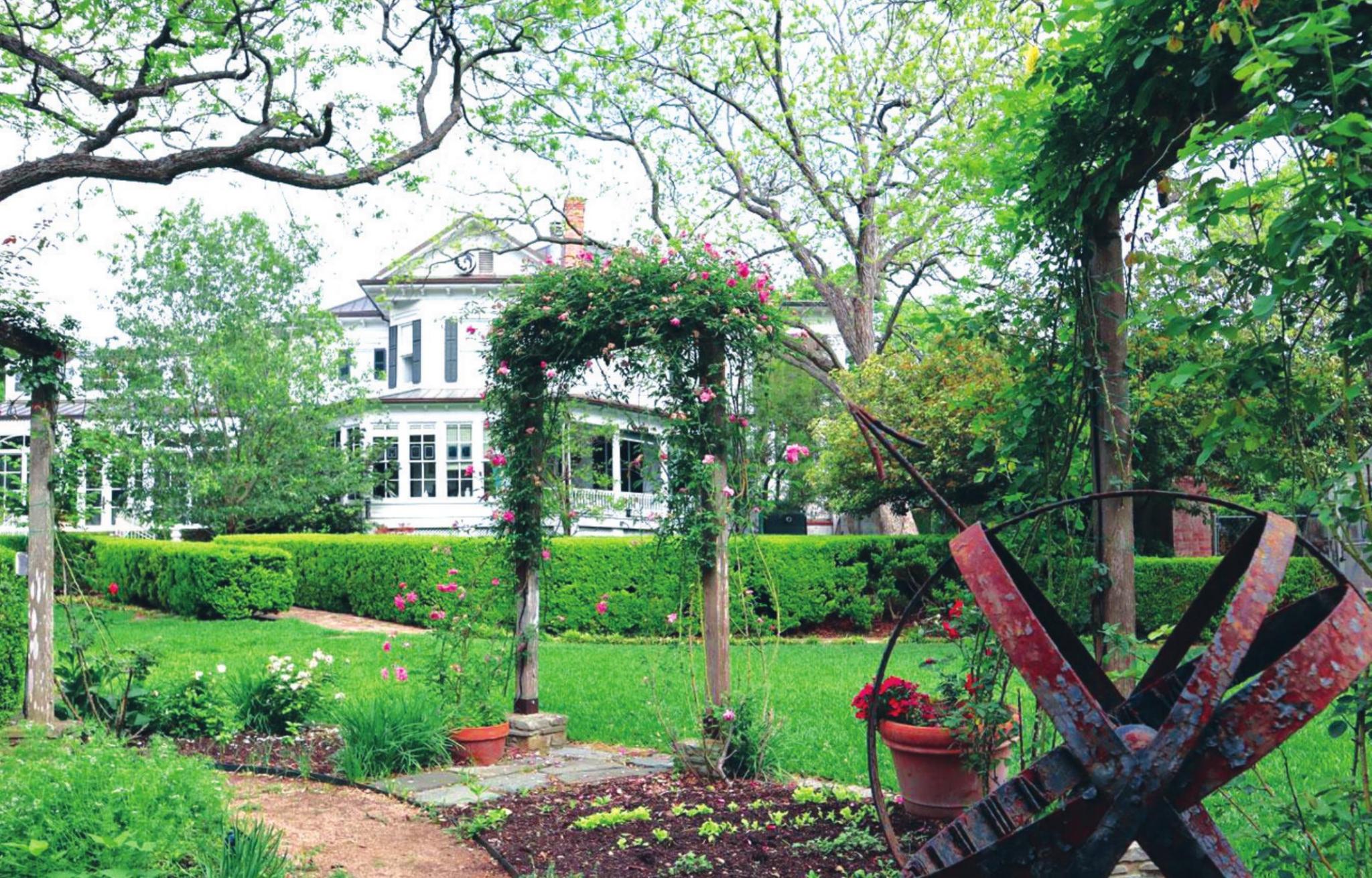 Above, a view of the house as seen from the winding paths of the Crookwood garden. Photo by Carl Deal 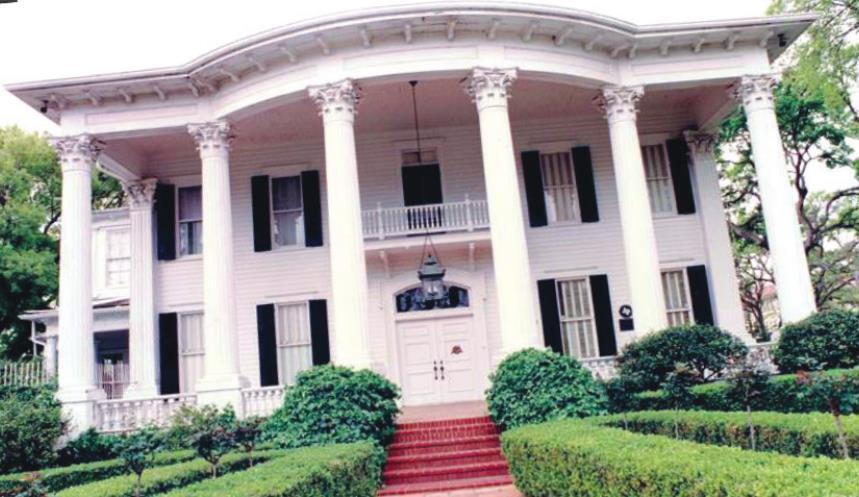 Right, the front of Crookwood Gardens. Photo by Denisa Burnham 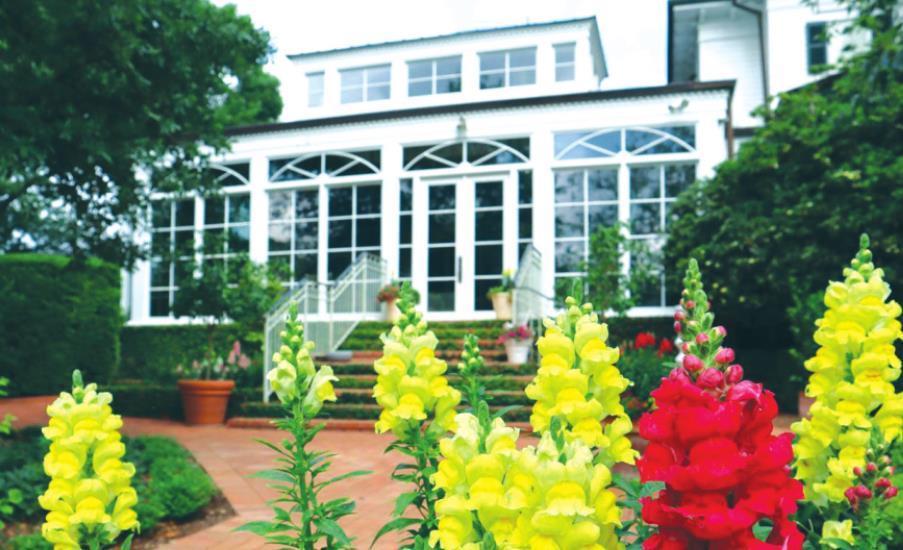 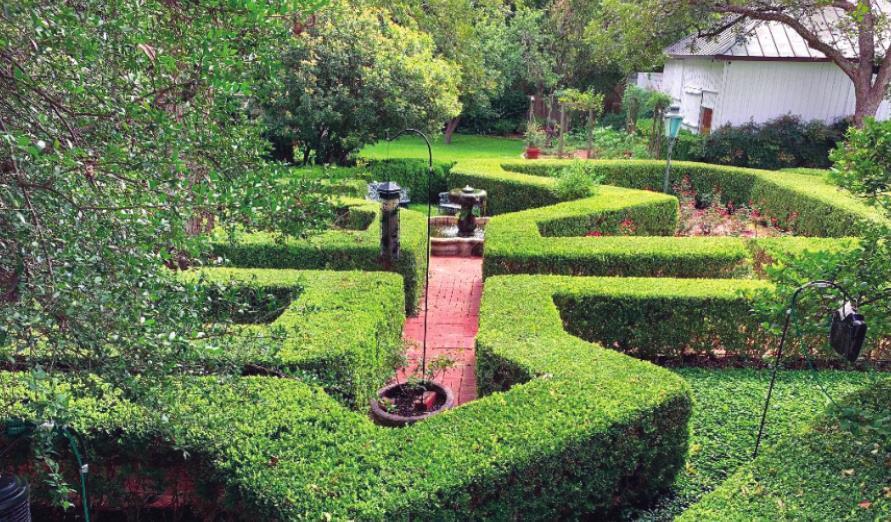 Like something out of a story book or a child’s imagination, Crookwood Gardens has a hedge maze.

The gardens of Crookwood, home of former Ambassador William H. Crook and Mrs. Crook, will be one of the sites of the 45th Annual Heritage Home Tour of San Marcos. Entrance to the gardens will be through an elegant side gate surrounded by walls laced in foliage to the left of the home, located at 227 North Mitchell Street at the corner of Belvin and Mitchell Streets.

A gourmet charcuterie, catered by New Braunfels Charcuterie and fresh lemonade provided by The Damron Group Realtors, will be served in front of the carriage house. Guests will also enjoy a musical performance by the SMART Orchestra and are welcome to take photographs of the stunning gardens.

Crookwood’s exquisite architectural design, which includes gracious white front porch columns, was built in 1908 by Ike Wood, copied from a house on Peachtree Street in Atlanta. Wood, a merchant banker, opted against the popular Victorian style of architecture at the time and chose a classical Greek revival style. The Crook family is the second family to own the house, and Mr. Crook combined the original family name with his own, hence the name ‘Crookwood.’ Mr. and Mrs. William H. Crook purchased the home in 1962 when Mr. Crook was serving as president of the San Marcos Academy. In 1967, Mr. Crook was named the National Director of the Volunteers in Service to America (VISTA). Shortly afterward, President Lyndon B. Johnson appointed Mr. Crook to serve as the Ambassador to Australia (1968-1969).

Crookwood is gracefully adorned with hedgerows and colorful flower gardens that provide a delightful mix of fragrances. A stone fountain bubbles inside the walled enclosure, while goldfish can be seen swimming in the shadows, depending on whether the raccoons have raided the night before. An area where Mr. Crook buried the family dogs is marked with a stone: “Our Faithful Dogs.” A bronze of a young girl ornaments the south end of the garden near an arbor planted with Southern Jasmine and Crossvine. A walk along the arbor takes you to the entrance of a garden of native shrubs and pecan and oak trees with a marker reading “Garden of the Grandchildren,” a favorite area of Mrs. Crook’s eight grandchildren when they were small. Mr. Crook’s final project on the house involved transforming the outdoor patio off the kitchen, where two of his daughters held their wedding receptions.

Adjacent to the conservatory (a new addition to Crookwood, completed in 1997) is an elegant garden laid out in a formal style in red brick with boxwood lining the walkway and patio with plants that tolerate well through the Texas heat and drought cycles. A pool also provides a cool oasis during the summer months. Across from the pool, stands the old carriage house, which the Crook family called “the barn.” The barn was an alluring structure for the neighborhood children, oftentimes serving as a hideout. The barn was home to several animals owned by the Crook family, including a goat named Bilbo Baggins and a pony named Banjo. The Crook family later remodeled the barn into an office and guesthouse, which now serves as the office of the Eleanor Crook Foundation.

This year’s “See, Sip and Savor in the Historic Gardens of San Marcos” tour is on June 4,, from 11 a.m. – 4 p.m. Tour tickets are limited to the first 400 and are $25 advance/$30 tour day. Tickets can be purchased through the HASM website at heritagesanmarcos.org or the Charles S. Cock House Museum, located in Veramendi Plaza Park at 400 East Hopkins Street, on Fridays during May and on June 3 from 11 a.m.-1 p.m. Persons interested in becoming a sponsor, please contact Bronwyn Sergi at 512-757-0730. All proceeds from the

All proceeds from the 2022 home tour will go toward our 2022-2023 Capital Campaign to raise funds for the restoration and renovation of the Charles S. Cock House Museum.

The Heritage Association of San Marcos would like to thank the following 45th Annual Home Tour Sponsors:

Café on the Square