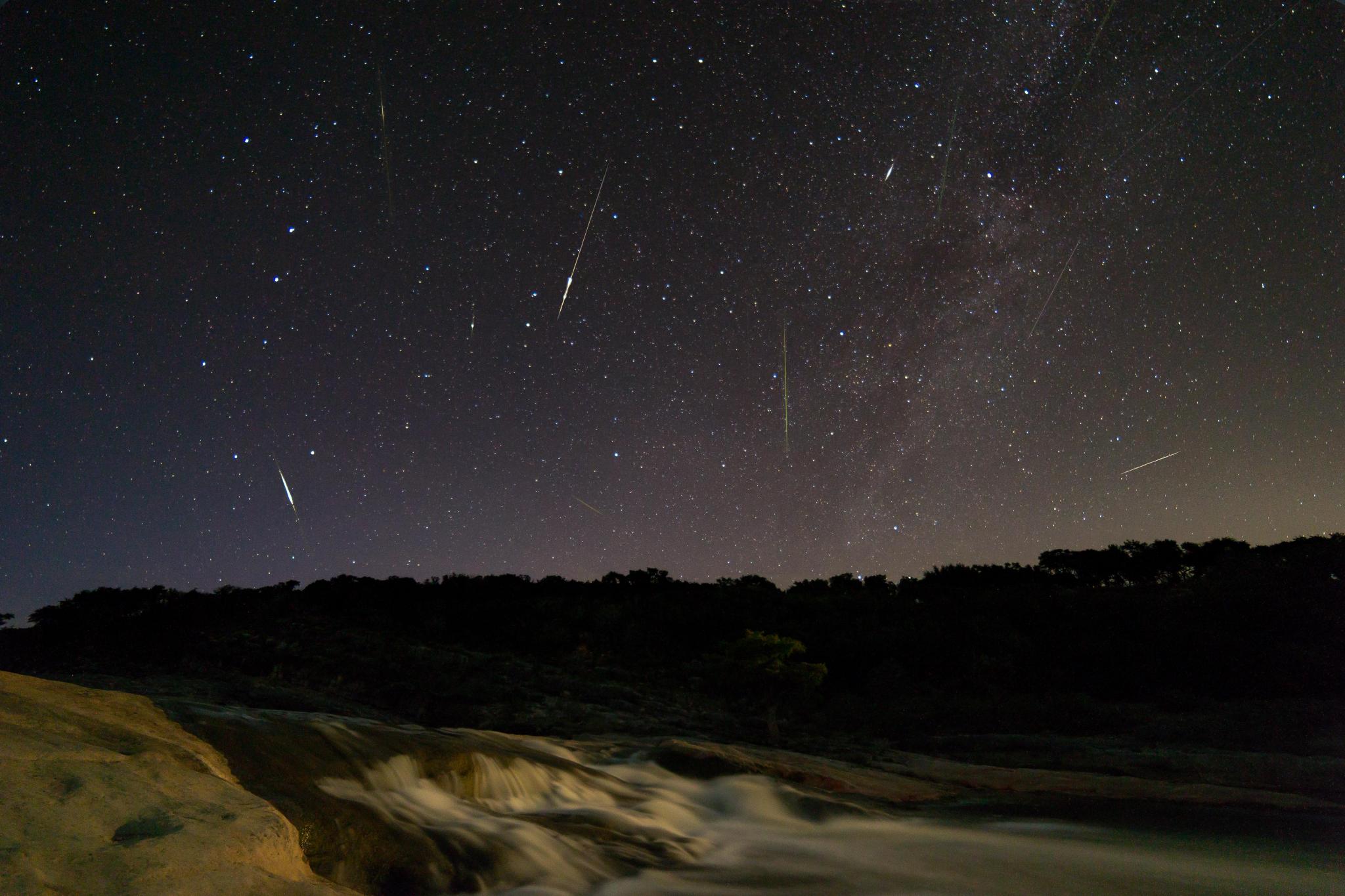 The night sky in some parts of Texas typically yields some of the clearest and best views for stargazing and meteor showers in the United States. Photo by Gerardo Moreno

Deep in the Heart of Texas

Recently along a stretch of Devil’s Backbone, people have been lining up their cars near a public-access picnic area to watch the setting sun. When conditions are right—and in the Hill Country, they often are—spectators can view a broad swath of the Milky Way, multiple planets, and since April, the Comet Neowise.

Next week, the Texas night sky will feature another spectacular show with the Perseid Meteor Shower. Throughout the year, about a dozen meteor showers occur as the planet passes through the debris fields of various disintegrating comets, but the Perseids are generally the most abundant and well-known. While skywatchers won’t see a literal ‘shower’ of meteors with the Perseids, it’s like that even with the last quarter moon in the sky, viewers will see several shooting stars streaking across the sky each hour.

Since the meteor shower will peak on the night of Aug. 11-12, the Hays County Friends of the Night Sky are hosting a virtual event to celebrate it.

To enter the meteor shower contest, The Friends of the Night Sky are encouraging people to take a photo or make a drawing of their home, family, pets or yard under the Perseids. A randomly-selected winner will receive two T-shirts and a tote bag from the Texas Night Sky Festival.

So where are the best stargazing sites in the Texas Hill Country?

“Because so many people go out there to go stargazing, our parks are open until midnight,” she said. “The best time is to go as soon as it gets dark.”

“One thing that’s really interesting in Dripping Springs is that we have a really tiny city limits,” Fischer said. “Outside of that, we can’t force people to comply with light ordinances, but a lot of people do it voluntarily. It’s pretty neat how many people do it because they want to.”

Lately, this effort has been more appreciated than ever as people have been seeking ways to get out and explore while maintaining responsible social distancing. Many Hill Country residents have turned to astronomy to fulfill their need to stay connected.

In an article by Diana del Solar, a Public Outreach Associate for the International Dark Sky Association, she wrote, “Around the world, people are adjusting to a new ‘normal’ as the COVID-19 pandemic threatens public health, the global economy, and the stability of the modern world. During this challenging time, supporters of the International Dark-Sky Association have looked to the night sky for solace.”

It’s true that the predictable nature of the night sky can restore a person’s sense of continuity. And with the regularity of the Perseids, there’s a guarantee that if a person keeps their eyes skyward, they’re bound to see plenty of shooting stars for wish-making opportunities.

For optimal viewing of the 2020 Perseid Meteor Shower, the best time to start watching will be as soon as darkness falls and before the moon rises in the east. The meteors will appear to radiate from the shower’s namesake constellation, Perseus, which will rise after midnight in the northeastern sky. Viewers will be able to see the meteors without telescopes or binoculars; in fact, unaided eyes are recommended to better take in the full scope of the sky.

“We encourage you to watch from your own yard, especially since the ideal time for watching is from midnight to dawn,” Fischer said.