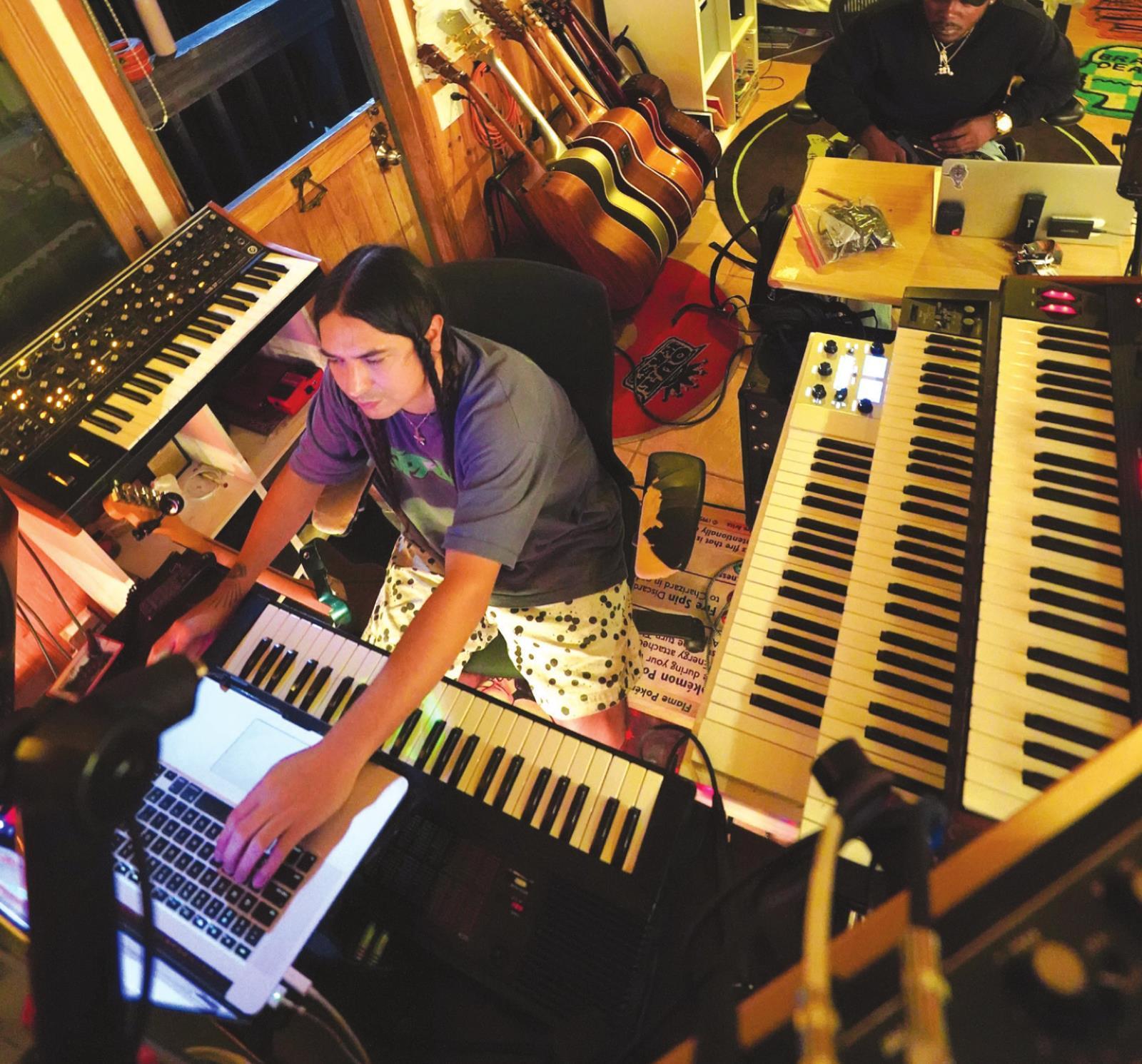 Everett Romano, a.k.a Heavy Mellow, in his element, working in the studio with fellow musician YNGJSH, who produces music for Ariana Grande. Photo by Takeshi Kudo

Sun, 01/09/2022 - 5:00am
Celeste Hollister
Features Editor
@celestecook74
chollister@sanmarcosrecord.com
Sunday, January 9, 2022
Commit early to the things you love. Find what you truly live for. That’s my word of advice. – Heavy Mellow, musician and producer

You may not know Heavy Mellow (yet), but you have definitely heard his music. The multi-platinum, Grammy-nominated music producer has worked with some of the most recognizable names in the music industry today — from Roddy Ricch to the Jonas Brothers, and many more in between. 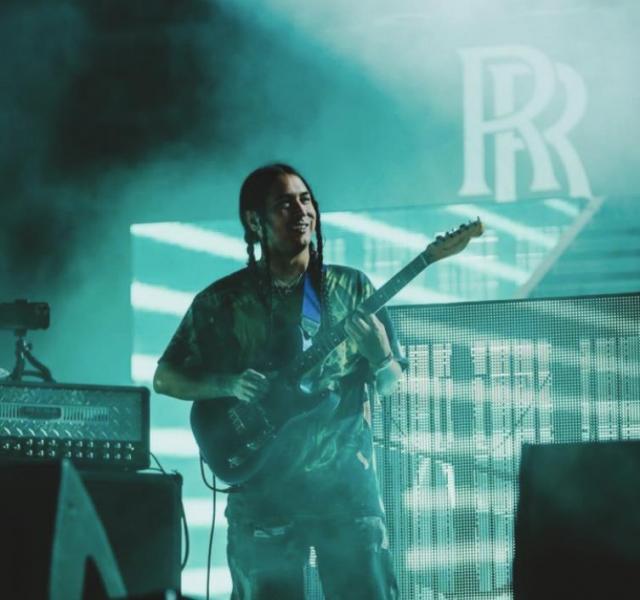 If you didn’t catch him on one of the tracks he’s produced for Skrillex or Juicewrld or Jack Harlow or Halsey, maybe you saw him playing on the Late Show with Jimmy Fallon. Or perhaps you saw him even closer to home.

Because before Heavy Mellow moved to Los Angeles and built his prolific career as a producer, he was Everett Romano, playing at San Marcos restaurants and south of town at Tanger Outlet Mall.

“I used to play at the Root Cellar for $50 and a plate of food,” Romano recalled.

Before that, while still a Rattler at Miller Middle School and San Marcos High, Romano and his classmates formed a band who practiced every morning before classes, then again during lunch, and then again after the final bell rang.

This passion and persistence — even from the age of four when he first learned to play piano — propelled Romano to pursue a career in music, leading him first to the Berklee School in Boston, then to New York, and now to Los Angeles, where he works as a musician and producer full time.

Moving to LA opened new doors for Romano, who goes by Heavy Mellow in his production work. “I have a very interesting life,” he said. “There are the stereotypical LA experiences for sure, but the one thing I wasn’t expecting was just how hard-working some of these young creatives are. They really are giving it 110%.”

Romano relayed stories of people coming to Los Angeles from other countries far from their homes and laying everything on the line — not even sleeping — in the pursuit of their music dreams.

“This is not an exaggeration,” he said. “But it made me realign my priorities. I have to commit myself even more. There are even higher levels for me to go.”

Romano’s willingness to commit drove him to learn his craft.

“The daunting part was the learning process,” Romano said. “I spent 10 years teaching myself and learning in school, learning how to do this.”

Even with this deeprooted passion and determination, though, Romano admitted it was still a struggle. “There were a lot of times I wanted to come home and work at H-E-B and call it a day,” he said. “But I’m really glad I stuck with it.”

Romano said that things began to change for him on May 31, 2018: A day he decided to take a chance on the Internet.

“I’ll never forget this,” he said. “I woke up that day and said, ‘this is the day I’m going to change my life.’ I turned my phone on and wrote a song. It went viral. So I woke up the next day and did another one.”

His EP titled Acid R&B Vol. 1, garnered 1.4 million plays in its first week and created a genre synonymous with the name Heavy Mellow. “It was a real moment of vulnerability,” Romano said. “In those videos, I was freaking out. I didn’t know what I was going to do or how to make rent. I went from being totally unknown to being shared around the world. That changed everything for me.”

Artists and performers quickly took notice of Heavy Mellow’s unique artistry and began calling him for work. That was four years ago, and since then, Romano has just been nominated for his third Grammy award. Currently, he’s playing guitar with Roddie Ricch on a massive US festival tour, and will play with the rapper on stage at Saturday Night Live Jan. 15.

Still, though, at his heart, Romano remains connected to his music and his roots. As a producer, Romano says that he thinks of himself as an interpreter.

“I try to be the key to unlock their magic,” he said. “They’ll say, ‘hey, Mellow, I had this thing happen in my life, let me tell you about it. They’ll tell me a story, and throughout that process I’m listening really closely, imagining what the tempo is of this feeling. There’s so many emotions that I have to translate.”

Afterward, Romano sits down in the studio with the artist, with his piano or guitar, and they collaborate together to make the final track. “Everything I do is improvised. I play whatever I feel in the moment. Sometimes it’s exactly what they want, sometimes they ask me to try something else.”

To succeed in an industry that is built on notoriously shifting sands, Romano says that his bedrock has always been his family back home in San Marcos. “They have been the most supportive people during this whole process,” he said. “I owe them everything. They never pushed me away from pursuing music, even though financially it’s not always seen as the most secure profession.”

Though Romano’s list of big-name music collaborators continues to grow, he is particular to credit his first fans in his success: his parents, Elsie and Anthony; his brother, Austin; his grandparents, Eva and Tony Rodriguez, and his grandmother, Margarita Romano, after whom he named his guitar, Maggie.

After Romano returns to Los Angeles, he intends to get back to work in the studio, where he has several projects on which he’s working. One of them is a solo project based on his original Acid R&B series.

But he admitted, too, that he liked the unpredictability that comes with his line of work.

“I never know what’s going to happen,” he said. “I wake up to a phone call or a text message or an email and my life changes again. It’s very unpredictable, but as long as I stay open and collaborative, then it’s the formula that works for me.” 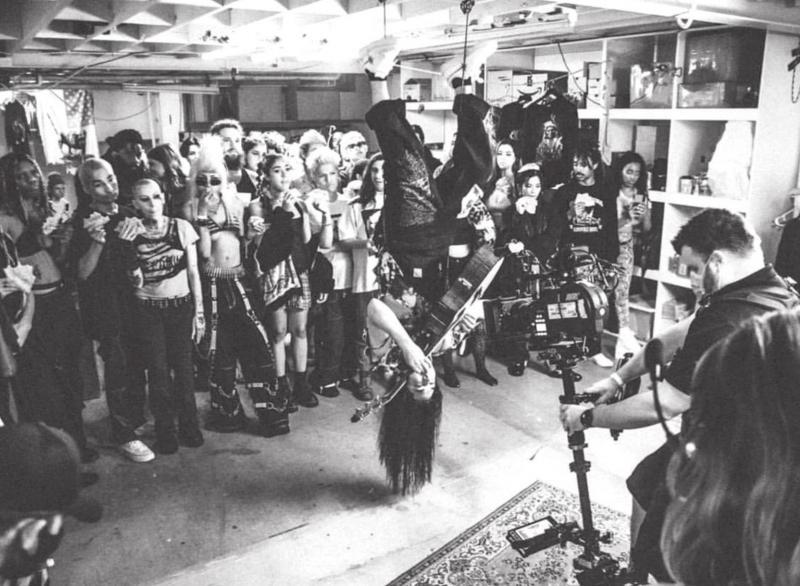 Everett Romano hangs upside down while playing guitar in the Skrillex video for the song “Too Bizarre.” Submitted photo

As for fellow young Rattlers who are making their way into the world, Romano had some valuable words of support.

“At the risk of sounding cliche,” he said. “Follow your intuition, follow your heart. Nobody is going to be able to live your life for you. Commit early to things that you love. Find what you truly live for. What makes you go to the band hall at 7:30 every morning. For me, it was playing music with my friends. That’s my word of advice.”