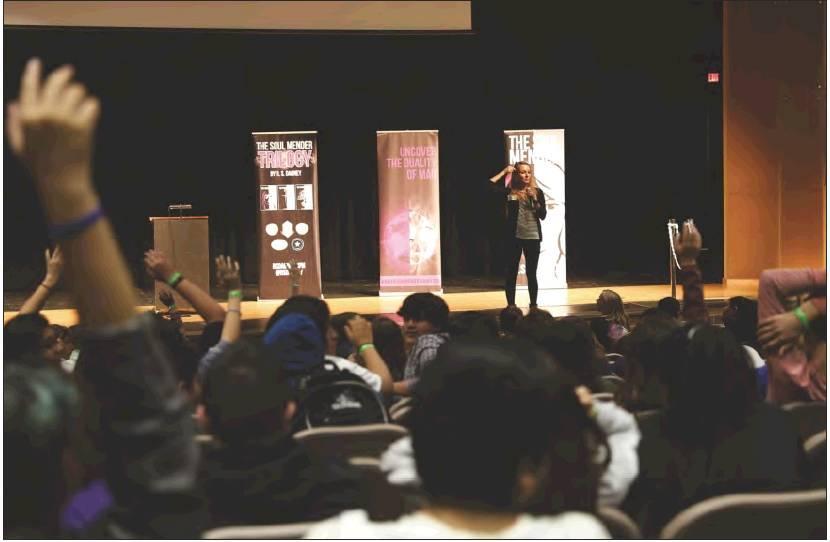 Author of the Soul Mender Trilogy, R. S. Dabney, came to San Marcos High School on May 10 to discuss her work with students.
Photos courtesy of SMCISD 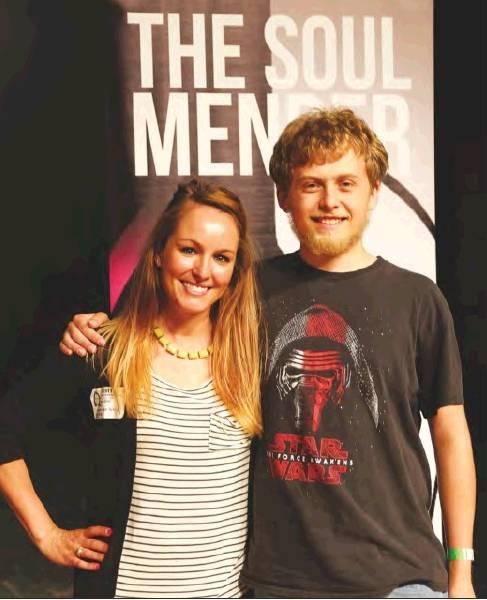 R. S. Dabney stands with San Marcos High School junior Damian Englehart during her visit to the high school in May.

A love of reading takes the right book

A love of reading can benefit a child for a lifetime; this is something that almost all educators and parents know, but how does one teach a love of reading?

San Marcos High School Button Academy Teacher Karen Cunningham has been an English teacher for three years prior to starting to work for the district’s credit recovery program, the Button Academy. This is actually her first year, out of a 35-year teaching career, to not be in an English class. But Cunningham, as an avid reader herself, has always tried to put the right book into her students’ hands.

“I always tell my kids on the first day of school, ‘there has never been a student that I couldn’t match with a book,’” Cunningham said.

Because of this, Cunningham has developed a relationship with most of her students, especially the ones that already are avid readers, or have become so in time. Damian Englehart, now a junior at San Marcos High School and for almost all his life an avid reader, had that ongoing rapport with Cunningham after taking her English class freshman year.

“When I see the kids in the hall they always say ‘Hey, this is what I’m reading,’ Cunningham said. “And so Damian walked down the hall with a book and I asked him what he was reading, he holds up this book and says ‘It’s really good, do you want to read it?’ And I said ’Yeah.’”

Englehart lent Cunningham the first book of a young adult fiction series, The Soul Mender Trilogy. Series being something Cunningham would not generally read, she read it anyways and shortly after went to go buy the second in the series and then the third – reading all three books in two weeks.

Cunningham said the thing that stuck with her from the trilogy is that it is a story of redemption.

“One of the things I love about this book, is that it is for everybody,” Cunningham said. “Because everyone needs to learn how to forgive themselves and to acknowledge that given other circumstances, you might not have come out as good as you are.”

The story centers around character Riley Dale, who finds herself flung into a universe parallel to her own and is confronted with the implausible story of a world split in two and the stark contrast between good and evil in people she thought she knew, including herself.

R. S. Dabney, who started writing the series when she was 21 years old, wrote each of the characters and each of the books with that idea of redemption and forgiveness in mind.

“I wanted to start out the books with a main character that saw the world in black and white, good and evil – and I wanted the reader to start out from that point as well,” Dabney said. “But the point of the books and what hopefully comes across with these characters, is that the world is actually much more gray than it is black and white. As the story develops, the characters learn more about themselves. They start to learn that they are all good and evil, they’re both black and white and that they both have light and darkness – and they also all have a choice.”

After reading the entire Soul Mender Trilogy, Cunningham decided to contact the author, and – without any permission or plans set in place – to invite Dabney to speak at the school. To which, Dabney responded with a firm yes. San Marcos High School also decided to purchase 100 copies of the first book in the series, so the entire class could read it for Dabney’s visit. And on May 10, students showed up to listen and ask questions when Dabney came to visit.

Dabney also brought her own set of signed books to Englehart – one which he says “is never being touched,” because it’s his collectors edition.

This wasn’t Cunningham’s first time to invite an author to come speak at the school, getting Neal Shusterman last year. Shusterman is an American writer of young-adult fiction, that has won the National Book Award for Young People’s Literature for “Challenger Deep.”

Cunningham approaches the reading and teaching from a different angle. Instead of trying to get her students to love reading, she tries to put something in their hand that they will love reading – something she says can make all the difference for a student.

“If you want kids to be readers forever, you have to get books they’ll read,” Cunningham said. “And unfortunately what most schools have are not books kids would read – and that tends to be a money thing – but if you can put a book that a student can relate to in their hand, you’ll see a change.”

According to Cunningham, this wasn’t Dabney’s last appearance at San Marcos High School; Because she already has her lined up for a writing workshop for students next year.