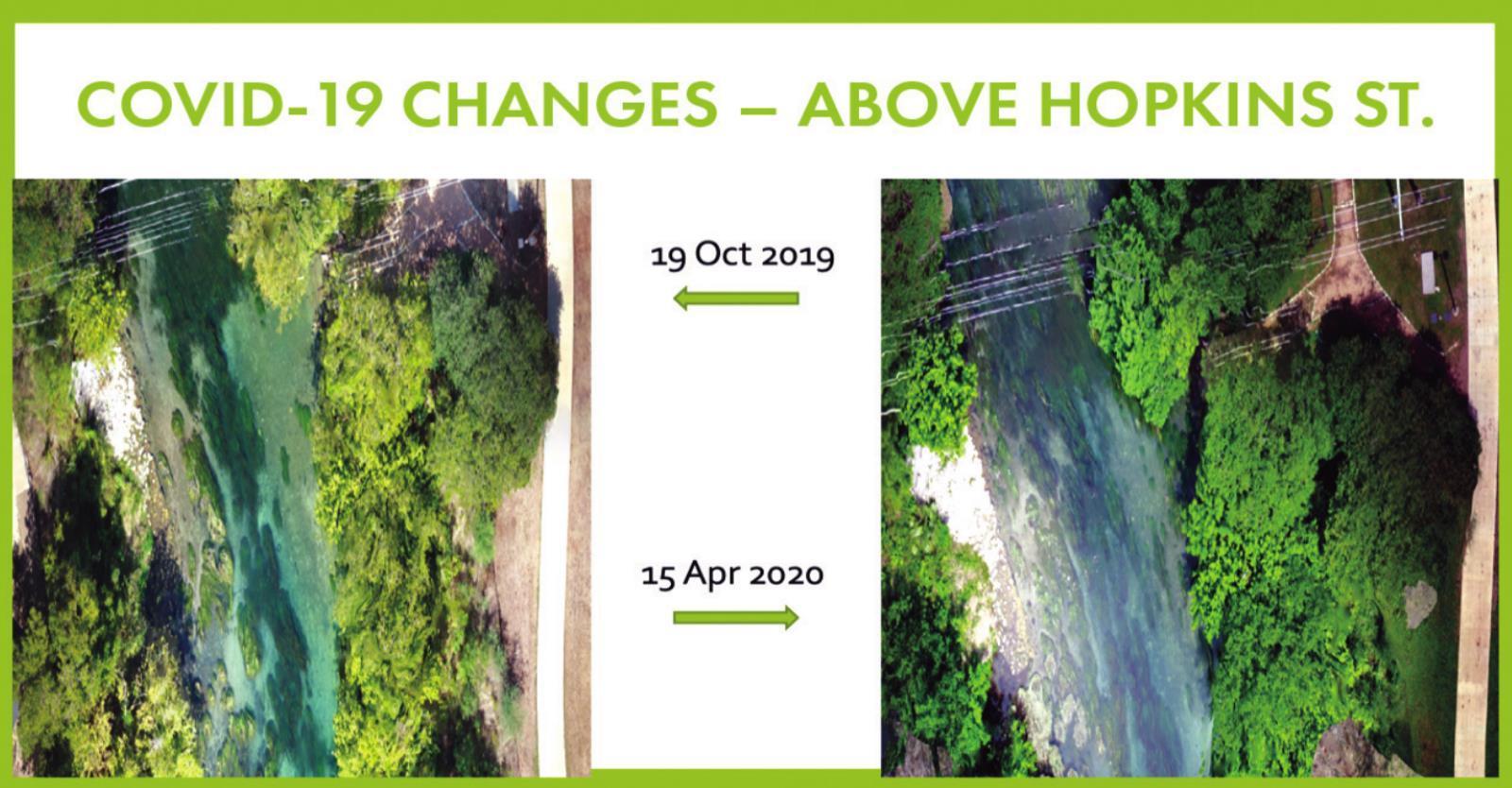 The above graphics show drone images taken before and after the COVID-19 quarantine. Photos provided by Rachel Sanborn of the San Marcos River Rangers.

Except for a brief span of weeks between May and June, the San Marcos River’s banks have been closed to most visitors since the middle of March, meaning that the humans who normally enjoy the river have passed Spring Break and the subsequent months of searing temperatures without enjoying the river’s cool, crystalline waters.

With most of the businesses on the Square shuttered through the end of July, with City Park and Rio Vista Dam bereft of the multitudes of bright yellow Lion’s Clubs tubes, it has seemed like something of a summer that wasn’t. Now, Texas State students have returned and schools are resuming classes, so it might be difficult to imagine a silver lining among the coronavirus clouds. 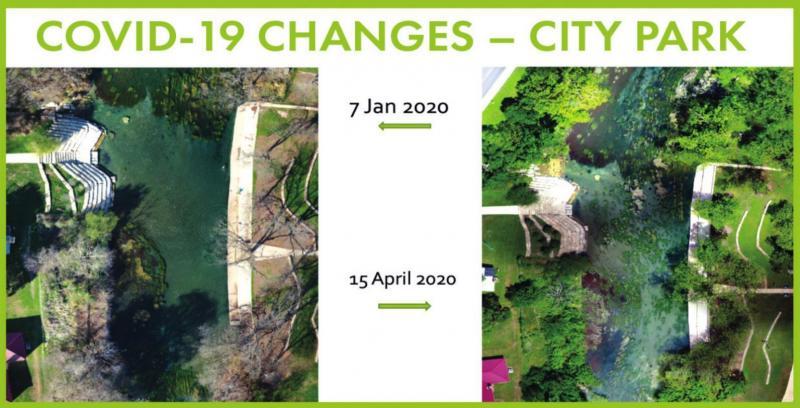 Yet, in the absence of human activity on the river, something remarkable has occurred. Since March, when city parks closed in an effort to stem the spread of COVID-19, citizen scientists from the Texas Stream Team have noticed some changes to the San Marcos River. Perhaps the most remarkable has been the return of the North American River Otter.

“Our rivers have been really quiet lately, so it makes sense that they have moved in,” said Aspen Navarro, the watershed services program coordinator through the Meadows Center at Texas State University.

Navarro, who works closely with the Texas Stream Team in her capacity as program coordinator, confirmed that while these otters are more frequently seen in East Texas and as nearby as Bastrop a few years ago, they have been spotted in several locations in and along the San Marcos River.

“It attests to how well we’ve been taking care of our rivers,” Navarro said. “[Otters] are really sensitive to pollution. The upper San Marcos River is the ideal habitat for them.” 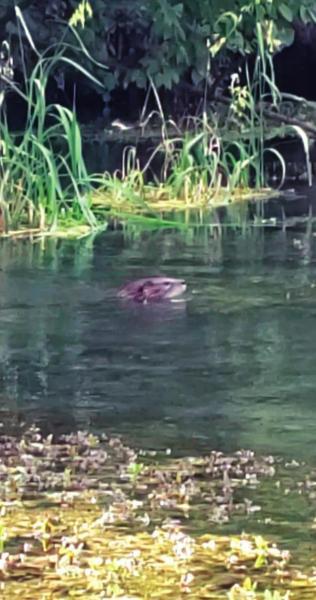 Otterly adorable: A family of North American River Otters have taken up residence in the San Marcos River. Photos by Oscar Belmonte Garcia

A century ago, North American River Otters were far more prevalent in the region, but much like the beavers who were once in abundance throughout the Hill Country, they were overhunted in the Texas fur trade. As the demand for otter and beaver pelts waned in the last half of the 19th century, humans began expanding into these animals’ natural habitats, driving them deeper into lesser populated areas.

An important distinction to make about both the river otters and the beavers is that they are not among the invasive species who have made the San Marcos River and its headwaters their home. Non-native species, such as the nutria rat and the suckermouth catfish, have been introduced to the area and stuck around because they lack natural predators who would remove them from the ecosystem.

“A lot of invasives are introduced,” Navarro said. “That’s a common thing. The suckermouth catfish population just exploded. It’s like the lionfish in the Gulf, they were introduced as an aquarium species, and people just dumped them.”

However, Navarro did go on to explain that not all invasives come to the San Marcos River because of human irresponsibility. Sometimes, as with the nutria, nature plays a part in their upheaval. According to the database at texasinvasives.org, “A hurricane in the late 1940s aided dispersal by scattering nutria over wide areas of coastal southwest Louisiana and southeast Texas.”

“We’ve done a good job of managing our river,” Navarro said. “So it’s an ideal place for species to thrive.”

In its connection to the Meadows Center, the Texas Stream Team takes that mission to the statewide level. The Stream Team, which started collecting data in 1991, is an organization dedicated to understanding and protecting the 191,000 miles of Texas waterways.

Based at the Meadows Center, the Stream Team brings together community members, researchers, and educators to conduct scientific research and to promote environmental stewardship. The Stream Team is often the first line of defense for Texas natural resources. Monitoring events to assess water conditions at over 400 sites annually.

Rachel Sanborn serves as the volunteer coordinator for the San Marcos River Rangers, the local Stream Team chapter that performs water sampling on the San Marcos from the headwaters to Prairie Lea.

“Our group has been monitoring for 25 years, so we have an extensive amount of data on the river during floods and droughts and regular summer months,” Sanborn said. Her group, composed of over 60 regular monitors who test sites along the river on a weekly basis, has noted some distinct changes in the river over the last six months.

“This summer has been different,” Sanborn said. After complying with the original shut down orders, they restarted data collection when they were certain they could keep their equipment safe and clean. Some parks and sites remain closed to the public, so River Rangers have had to adapt by moving to the nearest roadways and bridges in order to get as complete a pictures as possible of the current state of the river.

“Monitors do report that the areas looked clearer than most summers, simply because there is no recreational activity kicking up sediment,” Sanborn said. “What has become extremely apparent is that the wild rice is really thriving without the recreational activity that normally beats it back every summer. There are huge swaths of solid growth, all remarkably healthy looking and surprisingly high above the waterline and much of it blooming. In my memory, I have not ever seen it this lush.”

Sanborn said the presence of the river otters can also be attributed to the lack of crowds in the river. “What people are there, like the kayakers, are less intrusive,” she said. “It really was a surprise when they began being spotted south of Martindale, although we have had reports a few years ago of otters in Wimberley creeks.”

Oscar Belmonte Garcia, a San Marcos local who enjoys the river via kayak, had a recent close encounter with the otters on a trip near Snake Island on July 22. “I was on my kayak going back downstream and a lot of people were taking pictures far away,” Garcia said. “I went in quietly to him when he popped his head right in front of the kayak. Seems like they were getting food for a baby.” 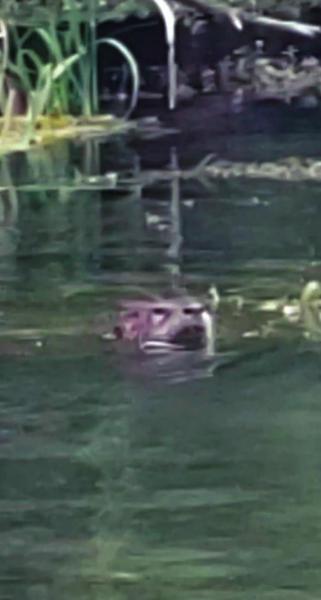 Garcia also reports seeing the otters near Spring Lake on the night of the full moon before the quarantine began, which seems to suggest that the otters have been here all along but were more scarce due to human encroachment.

Throughout the lockdown, the Texas Stream Team continued its efforts to train volunteers and monitor Texas waterways in order to safeguard these animals and their natural habitats. The program, which is 100% grant funded, continues to grow in order to meet the demands of such a large geographical area.

“Texas is such a big state,” Navarro explained. “We’re really working on moving out to areas that don’t have a huge population.” As for volunteers, Navarro said that the program attracts people of all ages and interests throughout the state. “People don’t need to know anything about the water or the environment. We’ll get you trained.”

Right now, they’re even offering online training sessions to those who want to get involved. “Whenever we were on a full lockdown,” Navarro explained, “People said they were glad they still have this to get outside and be with nature.”

The Texas Stream Team partners with cities, schools, and universities as well as individual volunteers. Training sessions last between four to six hours, and once trained, monitors can begin collecting water data right away.

“It’s a really good way to connect people with nature, while also boosting your resume,” Navarro said. “San Marcos is near and dear to my heart. It’s cool to see our river bounce back and thrive. Not that it was in a bad state before, but we see our endangered species thrive and survive. Like with the otters, here’s another sensitive species that’s able to come in and enjoy the river.”

For more information about the Texas Stream Team and the San Marcos River Rangers, contact txstream@txstate.edu or search the Meadows Center website.