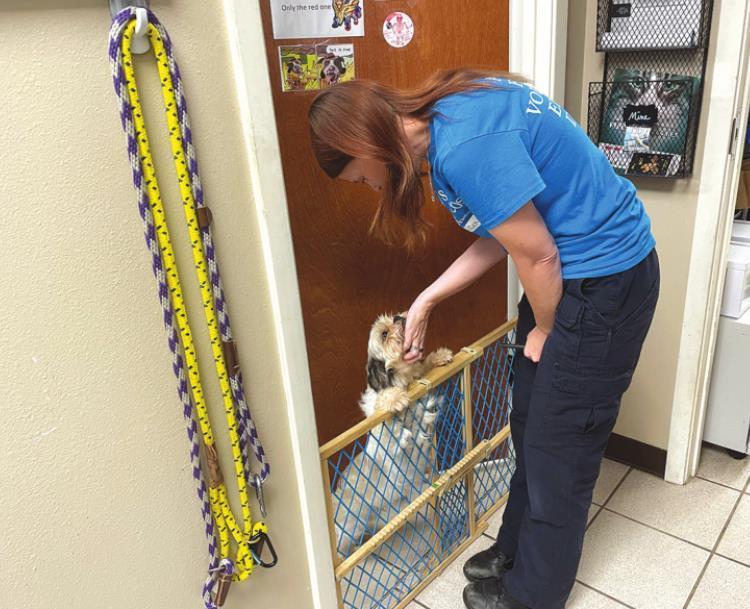 Christie Banduch checks on the Shih Tzu staying in her office. Photo by Keller Bradberry

Last week, the San Marcos Regional Animal Shelter held two adoption events across town in its effort to get pets out of the shelter and into homes. The first was held at Ivar’s River Pub on Nov. 14, where two dogs, one from foster and another from the shelter, were adopted and the second, held at the assisted-living community. Brookdale North on Nov. 19, saw the adoption of six cats. From the 301 animals in their care, 166 of those are currently in foster homes.

For the past month and until further notice, all ready-to-go pets are available for adoption for $10, including spay/neuter, vet exams, vaccinations, a microchip and 30 days of pet health insurance. This comes on the tail of ongoing renovations at the shelter which puts its dog kennel capacity down about a third, as they redo epoxy paint from building to building and install sound baffling in the adoption facility. Since the beginning of the month, they’ve facilitated 170 adoptions.

Since last November, SMRAS has been without an official shelter manager, so the shelter supervisor, Christie Banduch, has been acting as interim. In her office is a small shih tzu kept by a baby-gate, one of several pets around their workspace, playfully referred to as office fosters. She said that the intake of pets fluctuates day to day.

“Some days, we manage to get a few more out than what come in and other days it’s like, “Where are we gonna put this animal all day long?”

Banduch said the shelter is starting to come out of the throes of kitten season, which means all of the foster kittens coming of age return to the shelter for spay/neuter, to the tune of 30 surgeries a week.

“We nearly saw double in intakes during those summer months and now we’re starting to see that trend back down with the winter months, which is that kind of cyclic thing that we expect,” Banduch said. “We chose to get the renovations done during the cooler months because that’s when we’re traditionally going to see at least something resembling a dip in the intake numbers, but it’s always a daily struggle for space.”

Maria Rodriguez, who is the shelter's program coordinator, helps with the supervising duties, specializing in rescues and adoption events.

“A lot of them came forward with our improvements at the shelter, they’ve taken in a lot of adult dogs that are highly adoptable, just so that we have that space to be able to do the improvements,” Rangel said.

The annual $10 adoption special is typically only for a month or so, but it will be in place until further notice to keep pets going into homes. Banduch said that around 9% of the dogs that they intake test positive for heartworms. They do anywhere from $300 to $800 worth of veterinary care, which even the standard adoption fee doesn’t touch.

“We’ve kept it at the $10 adoption fee just because we are pressed for space. We’re trying to incentivize that now’s the time if you’re thinking about adding to your family, but if you’re responsible you’re gonna adopt that dog regardless of the adoption fee if it’s the right fit for you,” Banduch said.

During the coronavirus lockdowns, SMRAS saw a meteoric rise in the number of new foster parents, nearly completely emptying the shelter. While the shelter nears full capacity now, the foster base has remained fairly robust, which Banduch said is some of the best help to the shelter and, importantly, the pet’s chances of being adopted.

“We provide all medical, food and vaccinations — we’re on call for emergencies. We try to give as much support; it’s just like it’s still here at the shelter. We’re still taking care of it, but it’s just hanging out on your couch instead of in a kennel. It’s simple but that really goes a long way.”

Rangel said fostering a dog or cat helps it acclimate towards being adoptable. The noise and spacial restraint of a kennel can make a pet anxious and look unsuitable for home life. 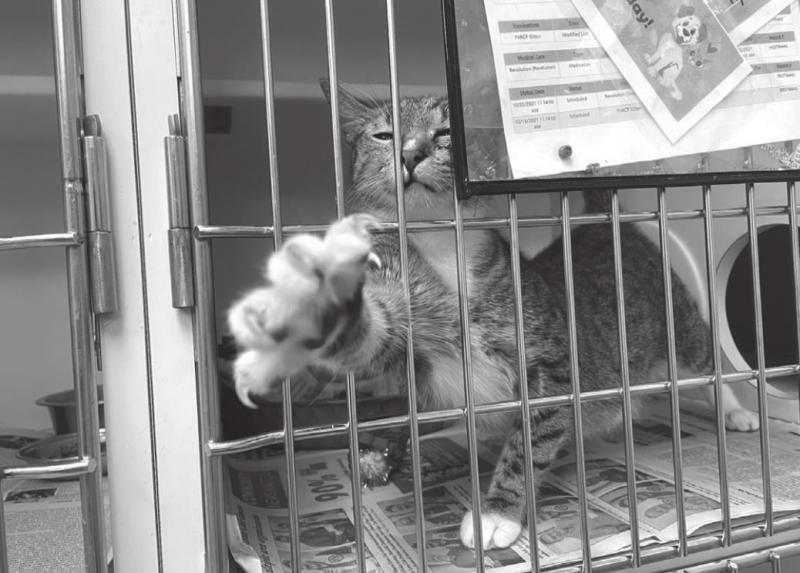 Other than fostering or adopting, one can help the dogs and cats in the shelter by volunteering to share their online presence and network to find them a home. Also, they encourage people to come and spend time with the dogs out of their kennels.

Banduch said, “When you get them out of the kennel, they’re more relaxed and when people are coming to adopt, they’re not looking crazy in their kennel because they haven’t been out all day, so that’s a huge help to these guys.”

If your pet goes missing in Kyle, Buda, San Marcos or anywhere in between in Hays County, the shelter is the place to check. If you feel the need to surrender your pet, they’re more than willing to work with you to prevent that.

“We call it an intake diversion, where we try to identify what the time frame and the need is. Is there something we can help with to eliminate the need to surrender altogether? So we have the forget-menot program and we can sometimes help with bills like a pet deposit,” Banduch said. “I feel like a lot of these animals that come in are owned pets, the shelter needs to be for animals that are truly homeless. We want that space to be reserved for animals that truly have nowhere else to go.”

As for the cat adoption event at Brookdale on Nov. 19, the resident program manager, Carrie Casillas, worked with Rangel to organize and said that although no residents adopted a cat, several college-aged people did.

“It’s the first time we’ve done anything like this. I focus on getting people involved but this time, I wanted to focus on the shelter and their needs, be there for what they needed and then I kind of got wrapped up in the cats myself.”

For more information about the resources, renovations, events, as well as their available pets and how to adopt or foster them, visit the shelter’s website: sanmarcostx.gov/208/San-Marcos-Regional-Animal-Shelter or Facebook page.