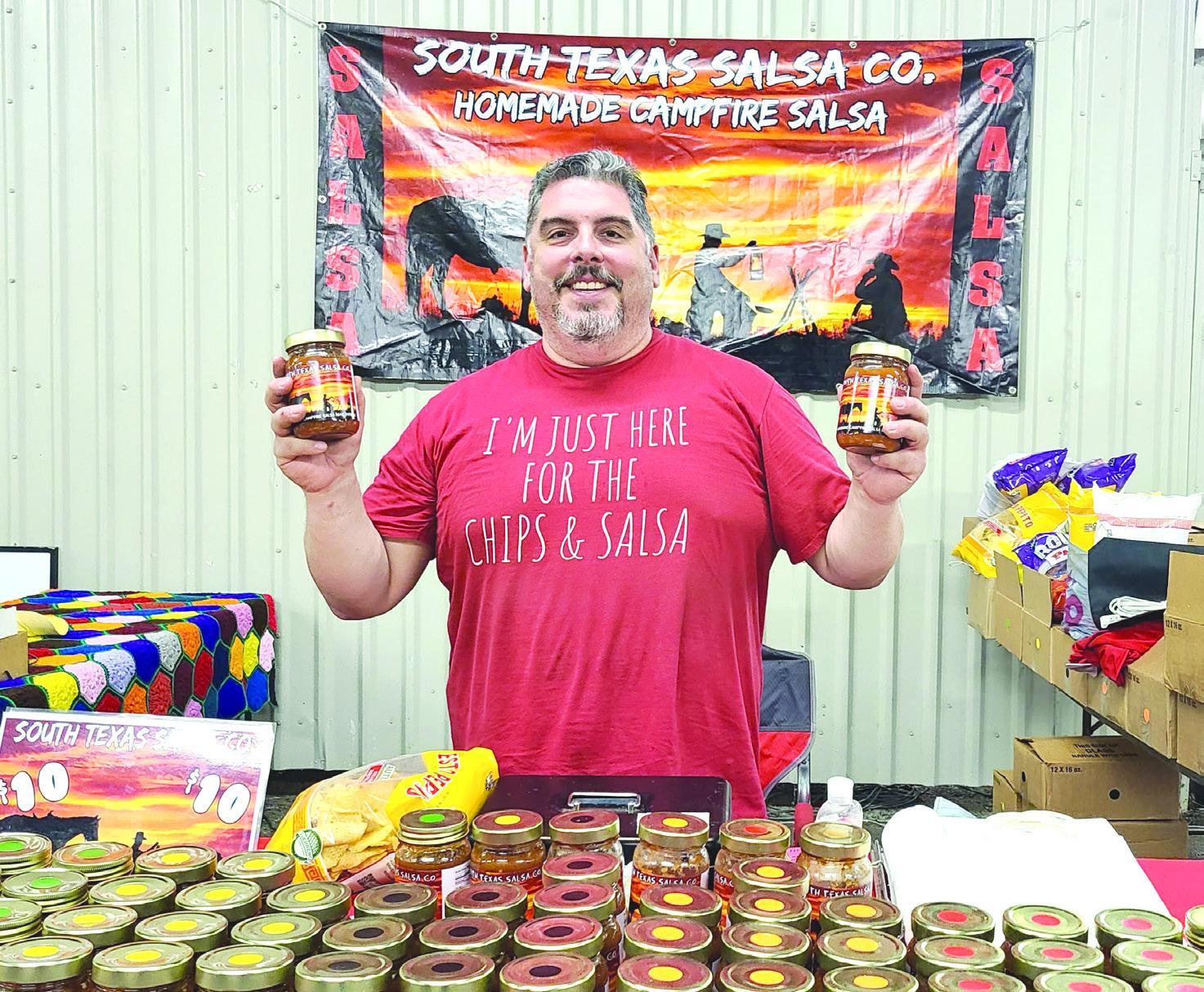 Cesar Elizondo’s homemade campfire salsa represents a Texas heritage going back 11 generations. Elizondo’s uncompromising devotion to keeping the recipe true to his family’s legacy is what sets it apart from other salsas on the market. 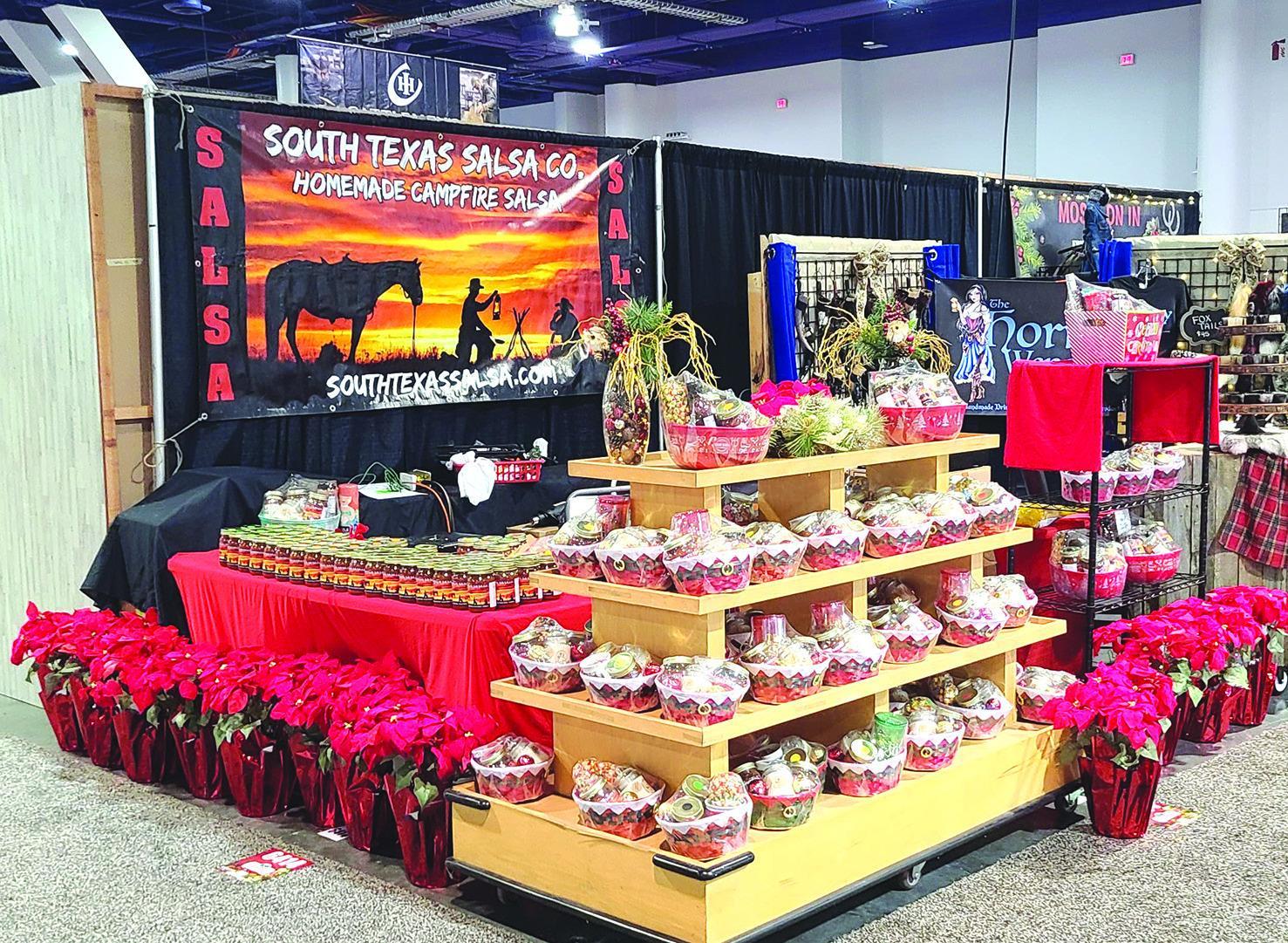 Elizondo has enjoyed great success at festivals and farmer’s markets. 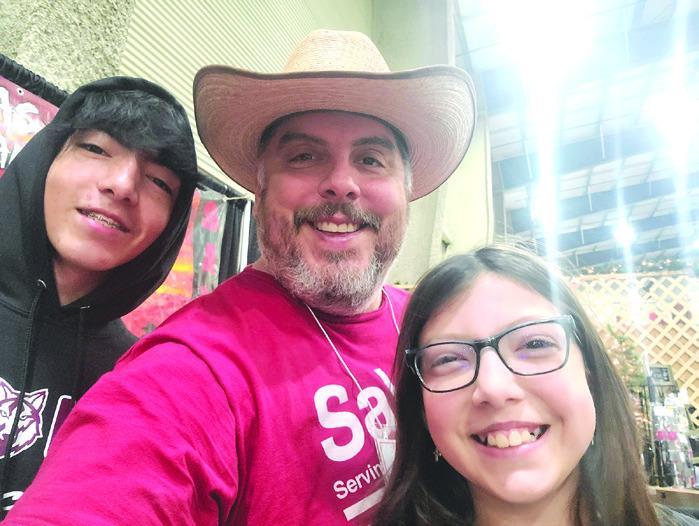 Chips off the
entrepreneurial block: Cesar Elizondo takes a photo with his business-minded proteges, Jaime (left) and Sophia (right).

What began as a mid-pandemic project made by a couple of cabin-fevered kids developed into a thriving salsa business. Owner Cesar Elizondo, who firmly believes in second chances, is pleasantly surprised.

In August 2020, Elizondo’s two children — 11-year-old Sophia and 16-year old Jaime — wanted nothing more than a day at SeaWorld, so they hatched a plan to sell something that would yield them enough money for their tickets.

Elizondo, who has struggled with health problems that caused him to rethink his life’s priorities, saw this as a chance to spend some quality time with his house-bound children.

“Their little entrepreneurial minds are always spinning,” Elizondo said. “It was my daughter’s idea to sell salsa.

People were always asking for it, and she saw that.”

Elizondo, an eleventh-generation Texan currently living in San Antonio, has been making his signature salsa for 25 years as holiday gifts for friends and family. It’s a recipe he’s been continuously perfecting over time, ensuring exactly the right consistency, heat and flavor. It’s not something that Elizondo takes lightly.

“My family’s been in this area since 1680 when we came from Spain,” Elizondo explained. “When they were doing trail rides or running cattle, they only had the basics. They had their vegetables, their peppers, the wood from the fields, which was usually mesquite. That’s what they used to make their salsa. I’ve tried to keep that tradition as close to the original as possible. That’s what sets me apart from everything else that’s out there.”

Sofia and Jaime both recognized this and saw an opportunity. “Everyone wants Dad’s salsa,” they said. “Let’s sell it.”

Elizondo, no stranger to successful business endeavors, having enjoyed a successful career in car sales with BMW and Mercedes-Benz and opened a popular memorabilia shop in Corpus Christi called Mantiques & More, decided to give it a try.

“We made a bunch of salsa,” Elizondo said. “Then we made an announcement on Facebook Live. Within 30 minutes of making the post, we had sold out of salsa. We made a pretty good chunk of change.”

During the subsequent whirlwind of order fulfillment and delivery, Elizondo and his children didn’t realize that they had left the Facebook Live running in the background. This fluke led to over 3,000 additional orders for Elizondo’s special small-batch salsa, and the beginnings of a plan.

Elizondo called up a friend who walked him through the process of setting up a business. Before long, the South Texas Salsa Company was formed, specializing in Elizondo’s unique, authentic campfire salsa.

The next step was to take his salsa on the road. Elizondo found further success at farmer’s markets and festivals all around the state, but the biggest, most eye-opening opportunity came from the National Finals Rodeo Cowboy Christmas in Las Vegas, one of the largest shopping expos in the world.

At first, Elizondo felt reluctant to attend such a large event. It would mean traveling out of state and making 300 cases of salsa, no mean feat for someone who is still operating out of his own house.

After carefully weighing the pros and cons, Elizondo decided to take the risk.

“I did very well,” he said. “It was the most exhausting 17 days of my life, but the exposure was unreal.”

The positive feedback for his salsa was overwhelming, and Elizondo began to think about taking his small business to an even bigger stage.

“I have the winning lottery numbers, but I don’t know how to cash it in,” Elizondo said. “Right now, I don’t have the right people to advise me which way to go.”

Quality and authenticity remain of the highest priority for Elizondo, and he’s currently seeking a co-packer who is willing to make his salsa the way it needs to be made without compromising the recipe.

“I’m on the cusp of something incredibly huge,” Elizondo said. “I feel like I’ve come this far and I need to be extremely careful as to the next steps. I need to find someone who can help me. That’s where I am right now.”

To try Elizondo’s homemade campfire salsa in person, check him out in the Sights & Sounds Gift Shop Dec. 1-3 and Dec. 8-11, where he will be sharing samples and selling his products. For more information about South Texas Salsa Company, visit Elizondo’s website at southtexassalsa. com.