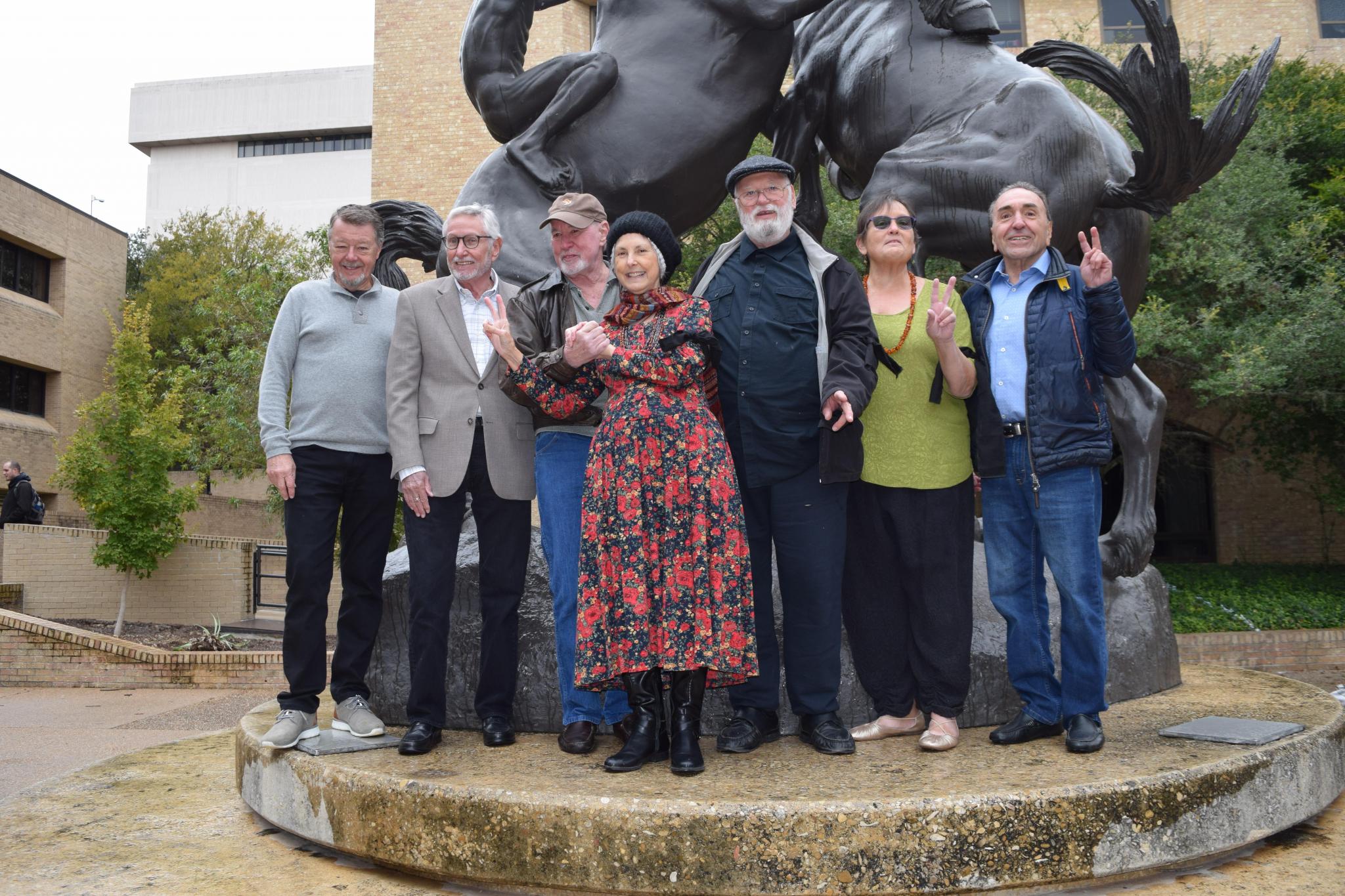 Seven of the original San Marcos 10 met at the Stallions on Texas State University on Wednesday to commemorate the 50th anniversary of the anti-war protest that made U.S. history. From left are Arthur Henson, Paul Cates, Murray Rosenwasser, Sallie Anne Satagaj, Michael Holman, Frances Annie Burleson and Joseph A. Saranello. Not pictured are David G. Bayless and the late Frances Vykoukal and David McConchie. Daily Record photo by Rachel Sonnier

On Nov. 13, 1969, a group of students at Southwest Texas State University — now known as Texas State University — staged an anti-war protest in front of the Stallions statue on campus. They sat quiet with crossed legs, some wearing black armbands, some carrying signs. They didn’t scream, they didn’t form a line or chant. But before the day ended, 10 students would be suspended, their course credits erased, and the grounds for a court case that would go all the way to the Supreme Court would be laid.

These 10 went on to be known as the San Marcos 10. And Wednesday marked the 50 year anniversary of the protest that brought them all together.

On Nov. 12, 1969, news of the My Lai Massacre, considered one of the most horrific incidents of violence committed against unarmed civilians during the Vietnam War, had broken and Americans at home were seeing images of the brutal aftermath flash across their television screens.

That coming weekend over 250,000 people marched on Washington as part of the second national anti-Vietnam War Moratorium. In solidarity with the cause to end the war and stop the needless killing of American soldiers and innocents in Vietnam, less than 75 Southwest Texas State University students gathered around the Stallions in a peaceful protest at 10 a.m. that November morning.

The first national Anti-Vietnam War Moratorium had occurred a month before on Oct. 15. Southwest Texas State University students had participated in much the same way and there were no repercussions. But the protest had garnered more attention than the alma mater for former President Lyndon Johnson wanted and, regardless of motive, school officials decided the planned November protest should be at a designated “free speech area,” away from the central quad and that protests couldn’t happen before 4 p.m. on weekdays.

“Well the university, I think felt very threatened by a second moratorium that would again get as much publicity,” Joseph Saranello, one of the San Marcos 10, said. “And so we planned and decided that we could hold it because we had a right to exercise our free speech rights, because we all felt that the Vietnam War was so unjust and so many people were dying.” 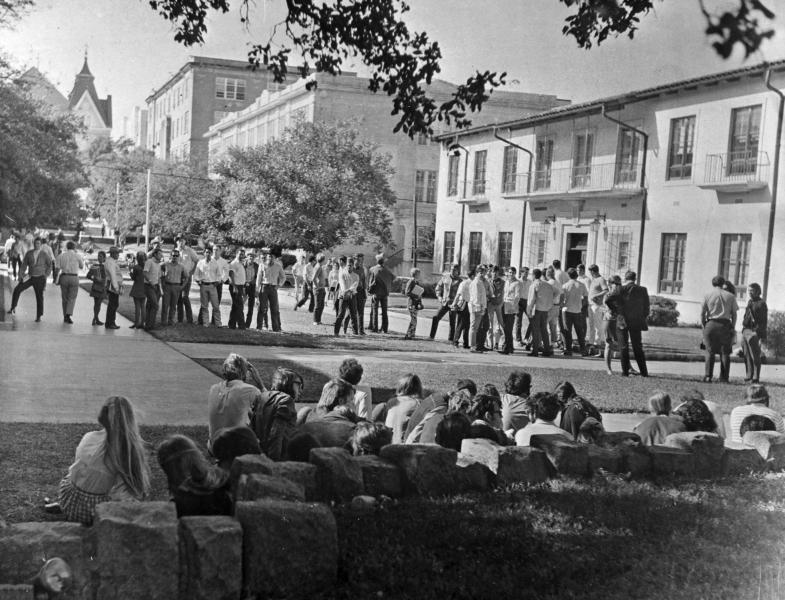 Onlookers begin to congregate in front of the anti-war protesters at Texas State on Nov. 13, 1969.  Photos courtesy of the University Archives, Texas State University. Reprinted from "The San Marcos 10: An Anti-war Protest in Texas" by E.R. Bills (History Press 2019).

So protest organizers decided to speak with two attorneys recommended by the American Civil Liberties Union (ACLU) to determine their rights before the Nov. 13 protest. The ACLU lawyers concluded that the students had a First Amendment right to hold another protest in the original location as long as they didn’t block quad traffic or create a disturbance. So the student anti-war protesters decided to gather around the Stallions again for the November moratorium.

One of the San Marcos 10, Sallie Ann Satagaj, a 20-year-old student at the time, remembers writing her father the night before.

“My father was in Vietnam at that time saving lives as a medic, and I wrote him a letter the night before,” Satagaj said. “And I told him that I loved him and I loved my country and that I didn't know what they were going to do the next day; but that I was going to stay if they told us to get up… My dad wrote me back, and he said, ‘I don't really agree with your stance on the war. But I know the Constitution gives you the right to do what you're doing in the First Amendment and I support you all the way.”

Approximately 30 minutes after the protest started that morning, Dean of Students Floyd Martine showed up, surrounded by an entourage of those that viewed the war moratorium as anti-patriotic. He gave the protestors an ultimatum: leave the area within three minutes or be suspended from school until the fall of 1970. Martine repeated the ultimatum, gave the group three minutes to clear out and then left. 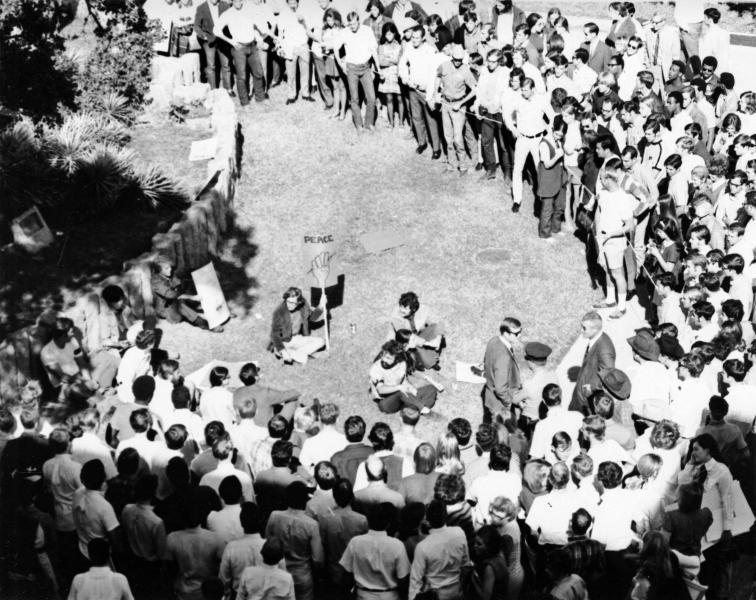 The San Marcos 10 are cordoned off and surrounded by counter protesters.

Campus security began roping the area off and most of the demonstrators dispersed, except a handful that remained. But those that remained already knew what they planned to do, like Satagaj, who knew before she sat down that morning beneath the Stallions she wasn’t going to leave no matter the implications.

“I knew I wasn’t leaving when I sat down. I didn't, I didn't have to think about not leaving. I knew I wasn’t leaving,” Satagaj said. “I knew, I wasn't leaving when I wrote my father in the dorm the night before. There was no thinking about it. And that was the same with Fran and David and Murray and Joe and all of us, we all knew we weren't leaving. We sat down and we knew.”

The crowd outside the ropes increased and then began to taunt the remaining protesters with calls of “My country right or wrong” and “Love it or leave it.” That’s when something unexpected happened, Satagaj’s German professor Allen Black stepped under the rope and joined the protesters.

“My German teacher, my professor, he crossed the rope and he sat down next to me,” Satagaj said. “It was, it was a very honorable move on his part. He sat down because the crowd was so ugly, so nasty.”

When Martine returned, he found 10 students and the German instructor sitting at the base of the Stallions. The remaining protesters, who came to be known as the San Marcos 10, were 27-year-old Vietnam veteran David Bayless, 19-yearold Frances Annie Burleson, 23-year-old Paul Cates, 19-year-old Arthur Henson, 23-year-old Michael Holman, 27-year-old David McConchie, 24-year-old veteran Murray Rosenwasser, 21-year-old Joseph Saranello, Satagaj and 18-year-old Frances A. Vykoukal. All 10 were suspended immediately and no action was taken against Professor Black.

After their suspension, the San Marcos 10 met with lawyers again and started the procedures to file a grievance. They fought their dismissal first through school channels — presenting their case to the Student-Faculty Board of Review, Texas State President Bill Jones and the Texas State University System Board of Regents. Their appeals were denied at every level.

The 10 then took their case to federal court. The ACLU filed a $100,000.00 damage suit against Martine, Jones and Texas State University, maintaining that the university et al had “created a policy which violates the rights of freedom of speech and assembly granted under the First and Fourteenth Amendments to the United States Constitution.”

U.S. Federal Court Western District Judge Jack Roberts denied the 10’s appeal for reinstatement but did not rule on the merits of the case. The 10 immediately appealed Roberts’ decision to the 5th U.S. Circuit Court of Appeals and the 5th Circuit temporarily blocked the students’ suspension. Under the conditions of the injunction, the San Marcos 10 finished the fall semester of 1969 and the spring semester of 1970. But in the summer of 1970, the 5th U.S. Circuit Court of Appeals found in favor of the university, ruling that the school had acted within its rights.

The 10 appealed the 5th U.S. Circuit Court of Appeals decision and then filed a second suit to force Texas State University to grant them credit for the classwork they completed over the 1969-70 school year. In 1972, the San Marcos 10 appeal made it all the way to the U. S. Supreme Court, but only Justice William Douglas voted to review the case. The Supreme Court let the lower court’s ruling stand without rendering a decision on them.

The San Marcos 10 lost all credits earned during the 1969-70 school year and their official transcripts still read “The U.S. Supreme Court has ruled for the administration and all credit is denied.” 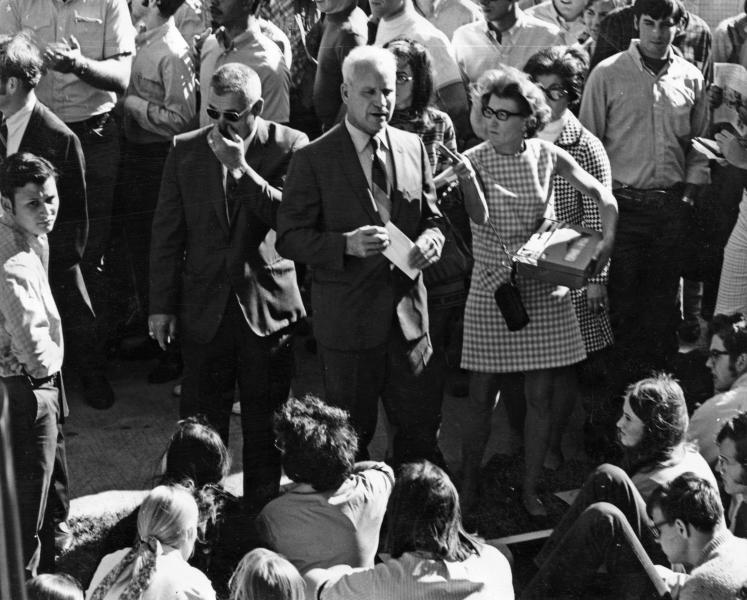 But even after all of that, the eight living members of the original 10, don’t regret their decision to stay that day.

“I never was bitter about it. It's what I chose to do,” Burleson said. “And even though the consequences were unjust and our rights were violated, I wouldn’t have made a different decision.”

They saw it as a necessary burden to stand up for the lives being lost and the men being drafted into a deadly war.

“Unlike our brethren in Vietnam, it wasn’t many of their choice to go,” Rosenwasser said. “But it was our choice to stand there.”

“Every person at this table, I think, is immensely proud that we stayed at the end of those three minutes, wouldn’t change it for the world,” Henson said.

And for all of them, it is viewed as the beginning of a lifelong friendship.

Author E. R. Bills, a Texas State University 1990 graduate, came across the story of the San Marcos 10 when he was still a student and went on to write a book on the event, “The San Marcos 10: An Anti-war Protest in Texas.”

His book, published on Oct. 7, offers a glimpse into the 1960s antiwar movement in Texas and the sometimes extraordinary measures to quell it. His book is available on Amazon and other book outlets.