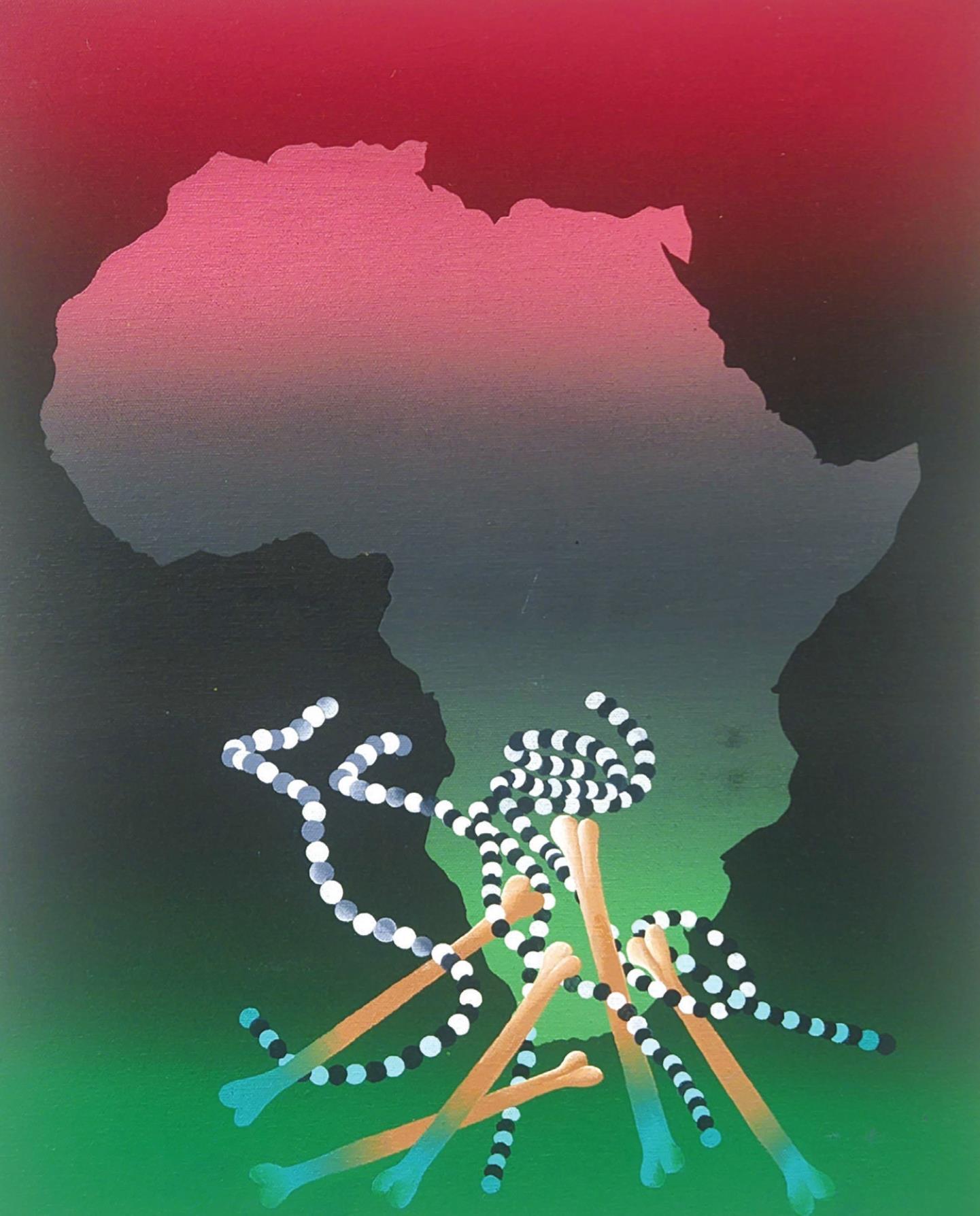 View of the Tropic of Capricorn, acrylic paint on canvas, by Bill Hutson, is currently on display at the Calaboose Museum.

Editor’s note: This is part of an ongoing series of features celebrating the life and artwork of San Marcos-born artist Bill Hutson.

World-renowned abstract painter Bill Hutson started his life right here in San Marcos. Born in 1936 at 733 Center Street, Hutson was raised here in the Dunbar neighborhood. Over the course of his life, Hutson traveled the world to refine his artistic style, becoming over time one of the most innovative artists in the world. Hutson has been recognized internationally and has received numerous awards for his work, which hangs in private and public museums in the U.S. and abroad.

Perhaps it’s a fitting symmetry that Hutson’s work is now displayed simultaneously at The Calaboose Museum and The Price Center as both art galleries are a couple of blocks away from where Hutson grew up.

The Calaboose Museum and The Price Center are two of the five local art galleries collaborating this year to showcase Hutson’s work. 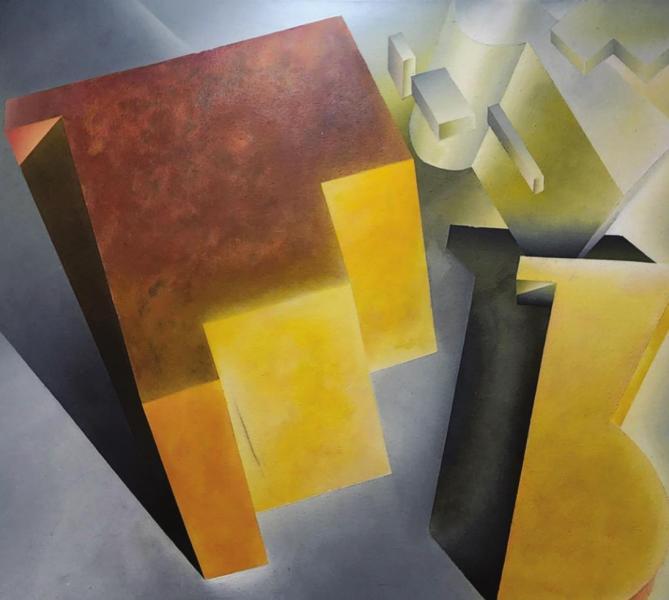 Study for Tactile Series #9 is one of the pieces that illustrates Hutson’s gradual move from two-dimensional to three-dimensional media. This study is currently on display at The Price Center gallery, but will re-locate soon to join the collection already on display at the San Marcos Public Library. Photos by Celeste Hollister

“It’s kind of a full circle show,” said exhibit curator Linda Kelsey-Jones. “Putting these shows together has been like a master’s class. I’ve learned so much. It’s not something I could have done on my own. I never intended to. We’ve been very grateful to have the help that we have in putting it together.”

The Calaboose portion of the citywide collaborative exhibit is subtitled, “The Opening” and focuses around the work Bill Hutson did during the time in which he lived and visited parts of Africa.

“Bill said he never felt he belonged anywhere,” said Kelsey-Jones. “Skyller [Walkes] of the Calaboose Museum said that is the way it is with the diaspora of Black people: Where do they belong and what is their fate?”

The Opening provides windows into Hutson’s experiences on the Island of Gorée, which lies off the coast of Senegal. From the 15th to the 19th century, the Island of Gorée was the largest slave-trading center on the African coast. In recent years, former President Barack Obama and Nelson Mandela have visited the location as a kind of pilgrimage.

“The Maison des Esclave is a photo collage depicting the House of Slaves where African natives were warehoused before shipped to the colonies,” Kelsey-Jones explained. “Bill would go up on this hill and look up at the heavens and think about the people who had been there on the island before. The sky would have been the last thing the slaves saw before the left their homeland.”

The exhibit also endeavors to honor Hutson’s process and progression through styles and media over the years.

“Bill works in series, and he is really into symbols,” Kelsey-Jones said. “Yellow represents the sun, which is both the sustainer but also a brutal element. The green represents the earth and agriculture. In the Dunbar neighborhood, everyone had gardens and they bartered to survive. Ms. Ollie Hamilton had a grocery store, but they would trade with each other in order to sustain themselves. The blue of the sky and the blue of the ocean. The rose color is like the maison. You can see, he uses the same colors for the island. Then there’s an undecided sky and the door of no return is black.”

The Calaboose show is devotedly curated to make the best use of the available space, but Hutson’s work also fits well within the Calaboose’s existing displays, as they connect with Hutson’s life here in San Marcos, the people he knew and the tightknit community that helped raise him.

The Calaboose Museum houses examples of Hutson’s printmaking, which he began to explore while in Africa, Paris and in Philadelphia with the Brandywine Workshop, which fostered the art form of printmaking in the Black community.

Then, in 2003, Hutson began painting over some of his existing prints.

“Bill didn’t follow the rules,” Kelsey-Jones explained. In printmaking, the emphasis of form lies on sameness and uniformity. By painting on them, Huston moved beyond the boundaries of what is expected, which distinguished him as a memorable and innovative artist.

“Most of Hutson’s most recent work has become more textured, layered and three-dimensional,” Kelsey-Jones said. The Calaboose contains several of his smaller sculptures to serve as a bridge between the museum exhibit and the tactile arts pieces shown at the Price Center.

“He moved toward the tactile arts because he wants art to be accessible,” Kelsey-Jones said. “He wanted people to be able to interact with the piece.”

The 3D pieces currently hanging in The Price Center will soon move to the San Marcos Public Library, where they will join the exhibit already in progress there titled “Trees are never finished.”

“Even though they’re moving, people can see these shows for several more months,” said Clay Destefano, executive director of the Price Center.

Behind the check out desk of the library hangs a large-scale tactile work titled “Defence Colony.” The bright green and red multimedia piece is based on Hutson’s time at an intentional community in Delhi. India, created for people in the armed forces. Huston, who served in the Air Force directly after high school graduation, was fascinated by the colony, so he created an entire series of works based on the community.

“This show is more of a survey over different times, places and styles,” said Kelsey-Jones.

The exhibit also holds the piece that inspired its title: “Tree that is not finished… yet,” which utilizes the same colors as the pieces in the Welkin Series housed at the Calaboose and which resembles the tree in the yard of Maison des Esclave, thematically uniting the shows together.

The combined efforts of the five local art galleries represent the first exhibitions of Hutson’s work in his hometown.

Other exhibits include “Images of Scorpius” at the San Marcos Art Center, which will run through April 2; and “Homestead,” featured at the Texas State Galleries, which will continue to hang until May 18. Contact calaboosemuseum.org, sanmarcosartcenter.com, and txstgalleries.org for information on viewing times for the exhibits.