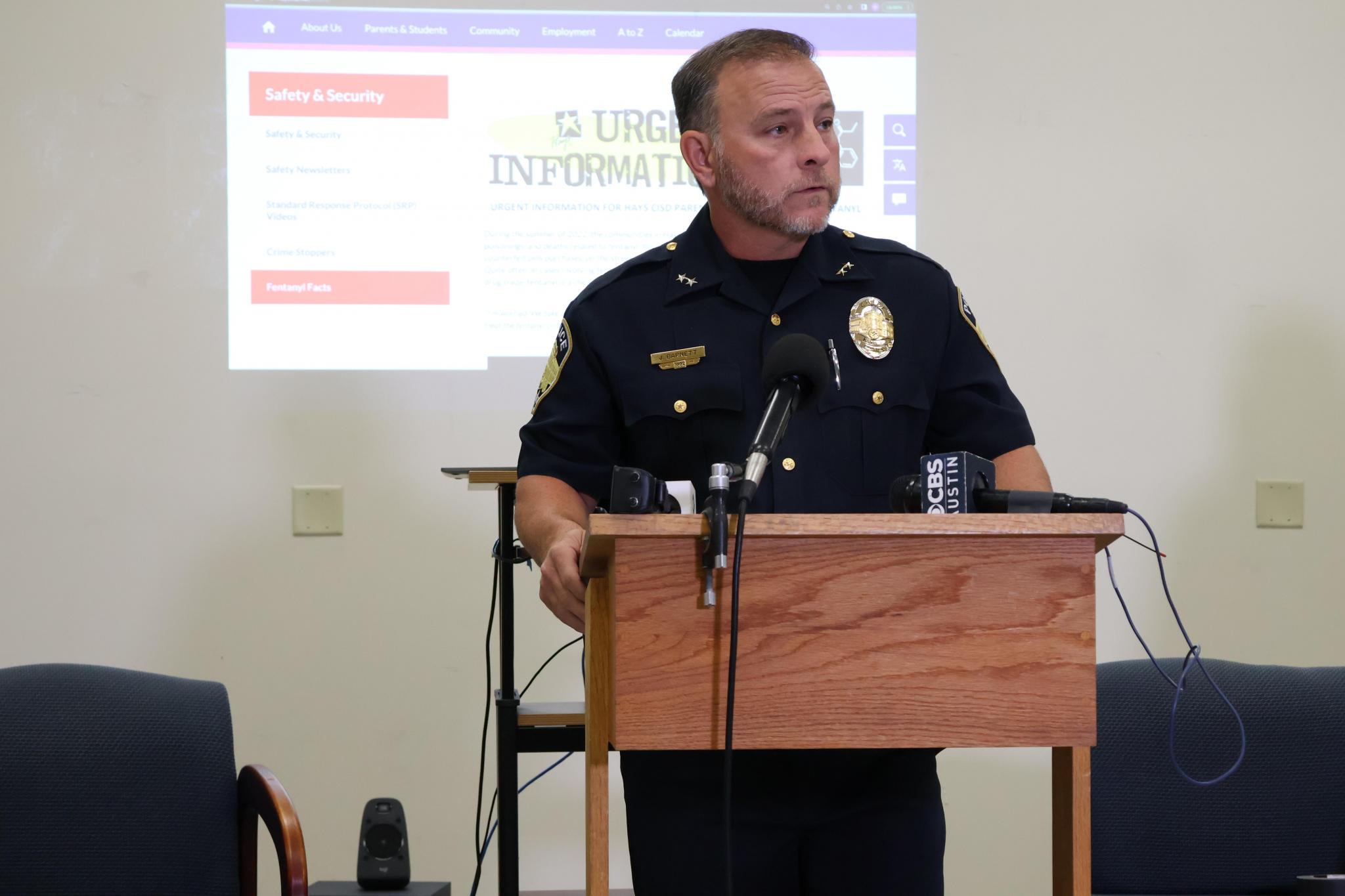 A Hays CISD student has died of a suspected fentanyl overdose, according to a school district press release issued Tuesday.

An unidentified 15-year-old sophomore enrolled in Hays CISD died from a suspected fentanyl overdose in San Marcos on Saturday, Aug. 20.

This marks the third suspected fentanyl death of a student at Hays CISD in the past month, school officials say. The students would have attended Johnson and Lehman High Schools.

“When you have your third student death, that’s a crisis,” Savoy said. “That’s a pattern. At that point, it’s ‘clear the calendar, clear everything off your desk, this is the number one priority.’”

Savoy said Hays CISD is developing informational posters to spread the word about fentanyl and recently went live with a website, explaining what action steps the district is taking and how parents and community members can get involved.

According to the district’s website,  Hays CISD stocks Narcan at all campuses – through the nurses’ offices and school resource officers (SROs) from the Hays County Sheriff’s Office.

Narcan is an overdose reversal drug that can potentially be lifesaving but is not a guarantee. Those precious seconds matter, a reality that San Marcos/Hays County EMS personnel know all too well.

Last week, Kyle Police Department authored a social media post ahead of the school year to warn the community about the dangers of fentanyl. According to the post, the department reported at least 16 suspected fentanyl overdoses with seven resulting in death. Many of the victims were reportedly between 14 and 18 years of age.

While the PD is still waiting on toxicology reports, Barnett told the Daily Record the police have other facts to strongly suggest deaths were the result of fentanyl.

“Because these pills are not laboratory-produced pills or label pharmaceutical-grade pills, the fentanyl dispersion throughout the pill is unequal,” Barnett said.

One of the reasons why fentanyl is so dangerous, according to Barnett, is that even consuming less than a pill can result in a fatal overdose.

“What we’re hearing ( the young people are doing is they are breaking these pills into pieces, and they're taking one piece at a time, thinking that if I take one piece and I'm doing okay, then maybe two pieces I can feel even better,” Barnett said. “What they don't realize is that these pieces have unequal amounts of fentanyl in them. And the first piece of pill, or the third piece or the fifth piece of pill can have a deadly amount of fentanyl.”

Distributors are finding their way into school districts through a variety of social media apps that target youth. Though Barnett couldn’t name the specific apps, he says that there are “many,” and a majority allow them to remain undetected.

Not only is fentanyl a dangerous and life-threatening drug, but the state of Texas also imposes severe consequences for manufacturing or distributing fentanyl.

Senate Bill 768, passed just recently by the Texas state legislature, set the punishment for the manufacture or delivery of four to 200 grams of fentanyl to a minimum of 10 years in prison or a maximum life sentence.

Barnett advises parents to have a conversation with their child about drug use, keep an eye on their child’s social media activity, and “really pay attention to this problem. Even if you don't think they are exposed.”

Friends and community members can also get involved by leaving an anonymous tip with Hays County Crime Stoppers.