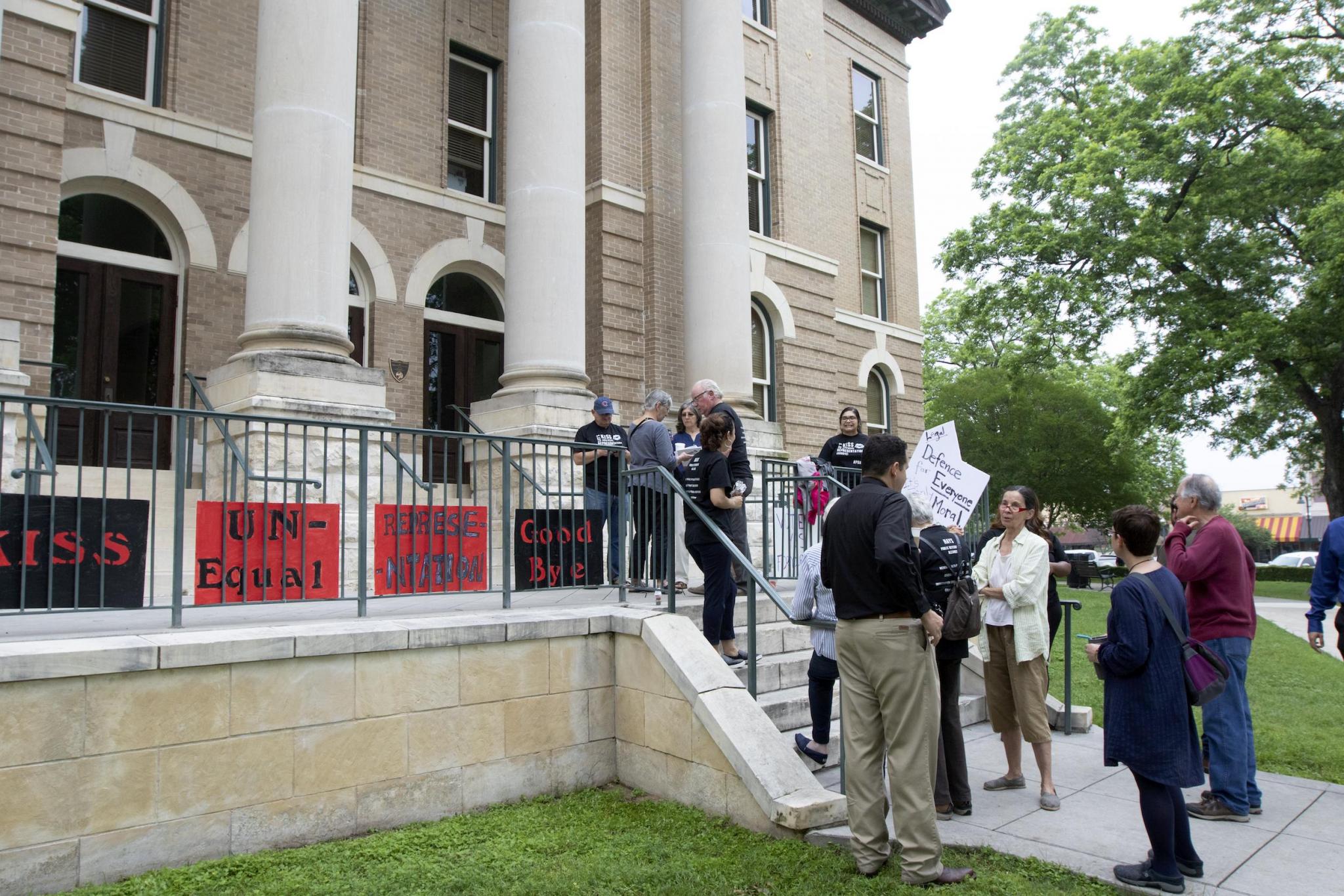 Ahead of the Hays County Commissioners Court meeting, speakers and demonstrators in favor of applying for a grant to create a public defenders office within the county gather on the courthouse steps to strategize. Daily Record photos by Denise Cathey

A motion to allow Hays County to submit a grant application for a public defender’s office sank on Tuesday after the commissioners voiced their wishes for more support and a better developed plan. However, a special meeting scheduled for 2 p.m. on Friday could revive the grant application process.

With three days before the grant deadline, it was the process that commissioners seemed to have the most concern about.

“We could have had this same conversation and worked through these issues two months ago,” Precinct 4 Commissioner Walt Smith said. “... We could have literally spoken about it every week in commissioners court since then. … The next thing we know, we get the application literally on the Friday before we have to vote before it’s due.”

Precinct 2 Commissioner Mark Jones said that he would like to have buy-in from the county’s bar association and judges before spending resources and time.
“I do think the consensus is what we want to do, moving forward, what’s best,” he said.

“But I also want to say that I think this is too important to have it fail going in,” she said. “I don’t know if that will happen, but I don’t want it to happen.”

The grant the county sought permission for is from the Texas Indigent Defense Commission (TIDC) and would cover 80 percent of the costs of establishing a public defender’s office in Hays County the first year, 60 percent the second year, 40 percent the third year and 20 percent of the costs the fourth year. Becerra’s chief of staff, Alex Villalobos, said the overall cost to the county over four years would be a little over $700,000.

Several members of the public spoke to the commissioners about the public defender’s office grant, and though most were in favor of it, some were not. Roland Saucedo said that the idea of a public defender for Hays County is a good one, but that the county was moving too quickly.

“I think it’s a great thing,” he said. “My only fear, the only reason I’m requesting that y’all table this item is that I think we’re moving too hastily. … We don’t feel the due diligence has been done.”

Saucedo also mentioned that there had not been conversations about how the county would continue funding the position once the grant money is gone, or about whether the office would be staffed by attorneys or law students.

John McGlothlin spoke against the idea of a public defender’s office though he did agree that better representation for the indigent in Hays County.

“I think if the county collectively could figure out a better way of representing the indigent who are accused of crimes, it could benefit us all,” he said. “... However, I think a public defender’s office would make it worse.”

McGlothlin said that public defender’s offices in small counties tend to attract “the very lowest portion of the bar” and that the office might provide equal representation, but it would be “equally bad.”

Speaking in favor of the public defender’s office were residents from all over Hays County, including Pastor Tim Bauerkemper of San Marcos.

“Jail needs to be a place for people we are afraid of, and not people we’re mad at,” he said.

Bauerkemper cited the case of San Marcos resident Faylita Hicks, who wrote a piece for the Texas Observer about spending 45 days in the Hays County Jail for a bad check.

“We spent thousands of dollars over a bounced check,” Bauerkemper said. “I have a list of people who would have covered that check if they had known someone was in jail for weeks, failing to graduate, falling behind.”

Hicks herself spoke to the commissioners court about the financial situation she was in when she was jailed and what it was like waiting 45 days for help.

“I gave my child up for adoption because I could not afford her in this county,” she said. “I went to jail in this county for 45 days becaue I did not have enough money in my account. … I have a master’s degree and I can’t get a job in this county because I have a record. … I’m wearing Wal-Mart pants with a master’s degree because I couldn’t find a job … because I have a record.”
Hicks said that when she finally did see a lawyer, she was not asked the details of her case or what the truth was; she was told what to do and how much it would cost to get out of jail that day.

Mary Gilroy of Rolling Oaks stated, “Fair treatment under the law in Hays County is often only possible for those who can afford it.”

Jimmy Alan Hall of Wimberley said that incarceration is for punishment. Keeping people incarcerated who are only accused of a crime is “not just punishment to them, that they haven’t earned,” he said. “It’s punishment to their families, their employers, their customers.” 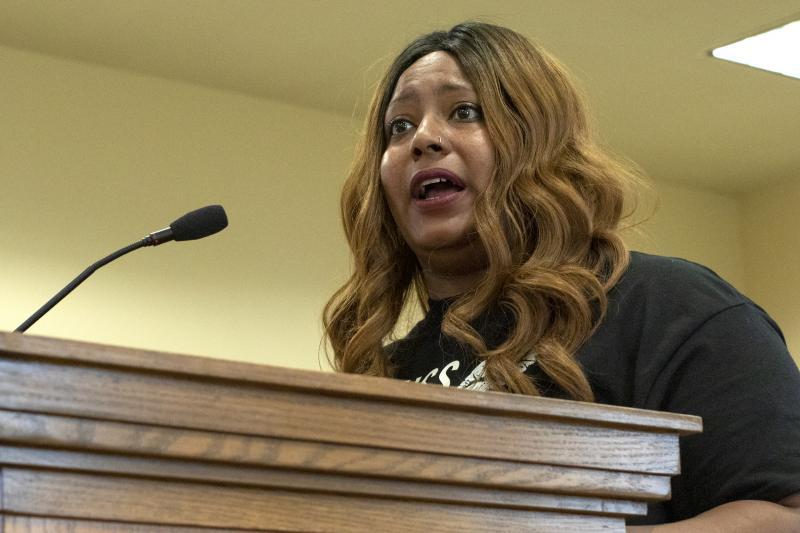 During the discussion in the court, Faylita Hicks takes the microphone to describe the 45 days she spent in pretrial detention at the Hays County Jail without access to a public defender.

In his presentation, Villalobos noted that in 2018, Hays County spent $4.3 million on outsourcing inmates, a figure that he said is up 6,895 percent since 2014. The goals of establishing a public defender’s office, he said, are reducing the total Hays County Jail population while maintaining community safety, increasing the proportion of personal recognizance bonds for certain defendants, ensuring that noncitizen defendants receive constitutionally required advising in a timely fashion and ensuring that defendants have counsel advocating for the reasonableness of bonds at magistration.

Geoffrey Burkhart, executive director of the TIDC, spoke to the commissioners about the importance of public defense.

County Court-at-Law 3 Judge Tacie Zelhart spoke about the grant application and said that though she signed on to the intent to submit the application, she would like to see more guidance from TIDC and more of a plan in place with more input from people “in the trenches” who will be affected by the creation of a public defender’s office.

“I will support a program … if I feel it’s done right and everybody’s brought to the table,” she said.

Becerra said that he is ready for action on the issue.

“I think a lot of people are nervous about it because holy smokes, we’re doing something,” he said, adding that the grant application is just “a threshold” to let the state know that Hays County is interested in the grant program.

Becerra also said that his office has reached out to judges and attorneys, but County Court-at-Law 2 Judge Chris Johnson said he had not seen any details about it.

“I don’t know what it says,” he said of the grant application. “… This may be a great idea but right now it’s unclear what it means.”

Villalobos pointed out that the county has been discussing criminal justice reform measures since 2010 but no progress has been made.

Ingalsbe said that she would like to have further discussions on the idea of a public defender’s office and asked if it might be possible to talk to the county judges and bar association before Friday -- the deadline to apply for the grant -- and then hold a meeting.

“I know we’d have to have an emergency meeting … but can we get that support generated by then?” she asked. “... I know it’s a big task.”