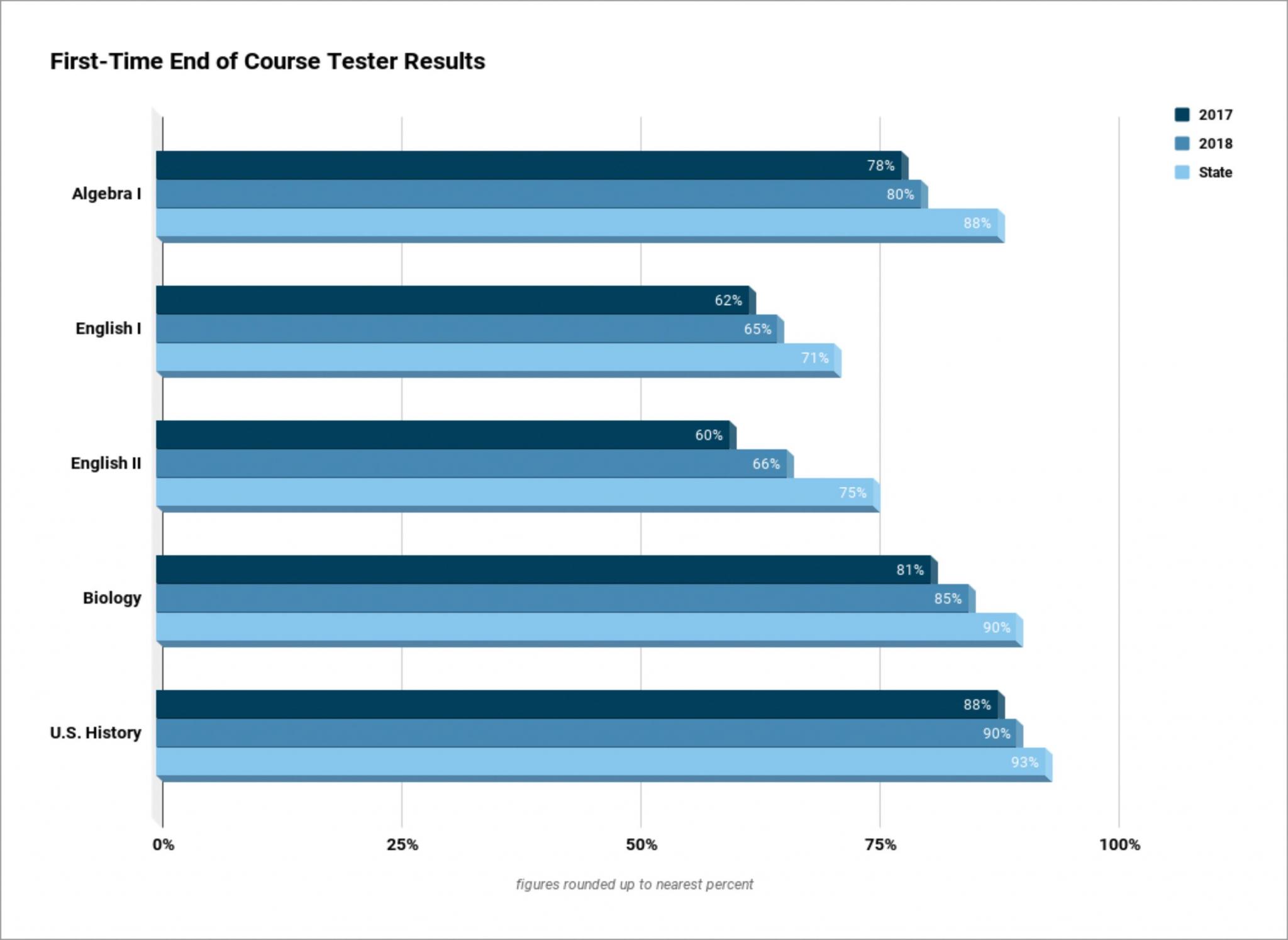 The San Marcos CISD board of trustees got a look at the district’s Spring 2018 standardized test results last week.

Monica Ruiz-Mills, assistant superintendent for teaching, learning and assessment, made a presentation to the board about the End of Course Exam and STAAR (State of Texas Assessments of Academic Readiness) test results and noted areas where improvement has occurred and areas where work still needs to be done.

This year, the STAAR Online Testing Platform experienced two connectivity problems that affected some test takers, including some students in the SMCISD.

“There were some issues with state testing,” Ruiz-Mills told the board. “There were over 100,145 students that were impacted. … We had 626 students impacted.

The scores that you’re going to see still have every student in those scores.” 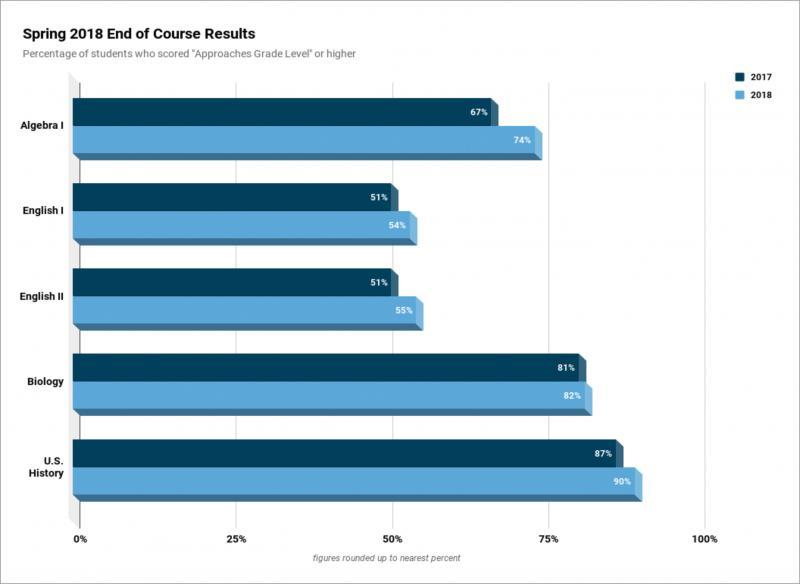 The district’s end-of-course test results lagged behind the state’s but still showed improvements over 2017. The percentage of students who scored “Approaches grade level” or higher increased for all of the end-ofcourse exams: algebra I, English I, English II, biology and U.S. history. In some cases, Ruiz-Mills pointed out, the same cohort of students showed improvements or remained at about the same level in subject areas.

The district is implementing more programs to reach all the student population sub-groups to help improve test scores. Moreover, more middle school students took the algebra I end-of-course exam in 2018 than in previous years.

Most of the district’s STAAR math and reading scores were below statewide levels for all grades except for fifth grade math, where the percentage of passing students jumped from 79 percent in 2017 to 87 percent in 2018, surpassing the state’s 84 percent. Ruiz-Mills noted that the same cohort of students who were seventh-graders in 2017, of which 64 percent passed, performed better as eighth graders in 2018, with 71 percent passing.

The district is focusing on third-grade and seventh-grade math, Ruiz-Mills said, because, “That’s where we’ve identified some of the struggles are occurring.” 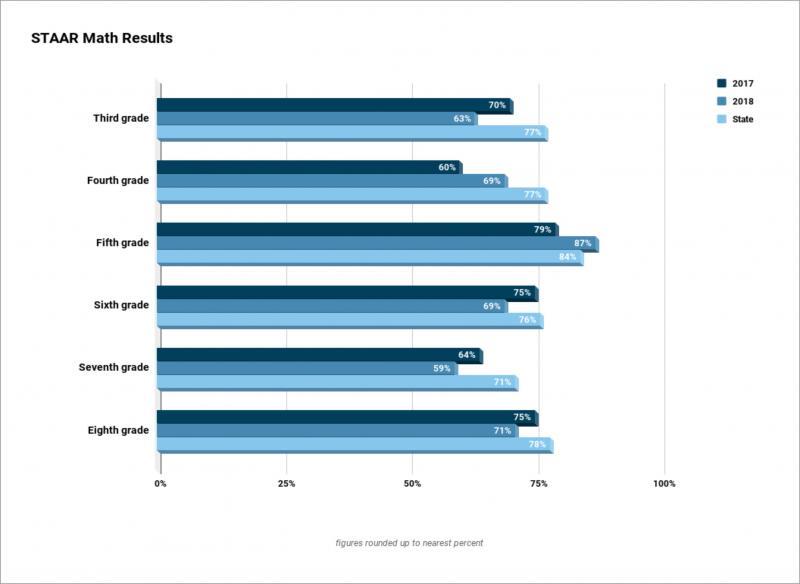 “Reading across (the chart), it might not be what we want it to be … but it’s not a measure of the work that’s actually occurring in the classroom because there are some gains,” Ruiz-Mills said.

The district’s fourth- and seventh-grade STAAR writing scores lagged behind the state, but Ruiz-Mills said the district has a strategy for teaching writing in multiple contexts across the curriculum.

“Writing is difficult, especially with our students that are English language learners, so we’re going to continue improving on this practice,” she said. “... We can get there. We will get there.” 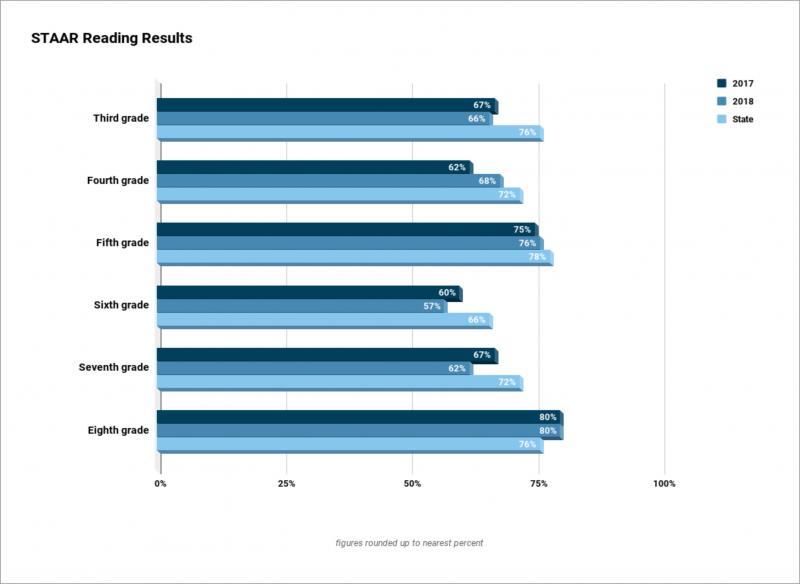 “I see in history and English, the gaps that are there,” she said. “And I know it takes a good three to four years for any good program to be implemented … to see some gains. And I hope we see some gains in that respect because the gaps are still there.”

Board president Clementine Cantu noted that some gaps are closing in some areas.

“Hopefully that will continue to shrink,” Costilla said.

Trustee Kathy Hansen asked what kind of extra training has been implemented for special education. Ruiz-Mills said that the district has made a big push for inclusion and for putting special ed students into appropriate classes.

This fall, the Texas Education Agency will implement a new accountability rating system. Districts and campuses will be rated according to three domains: student achievement, school progress and closing the gaps. In August, districts will begin receiving letter grades — A through D and F —- for their performance, while campuses will continue receiving the current “met standard” or “improvement required” ratings. Campuses will begin receiving letter grades in August 2019. An overview of the A-F accountability system can be downloaded.