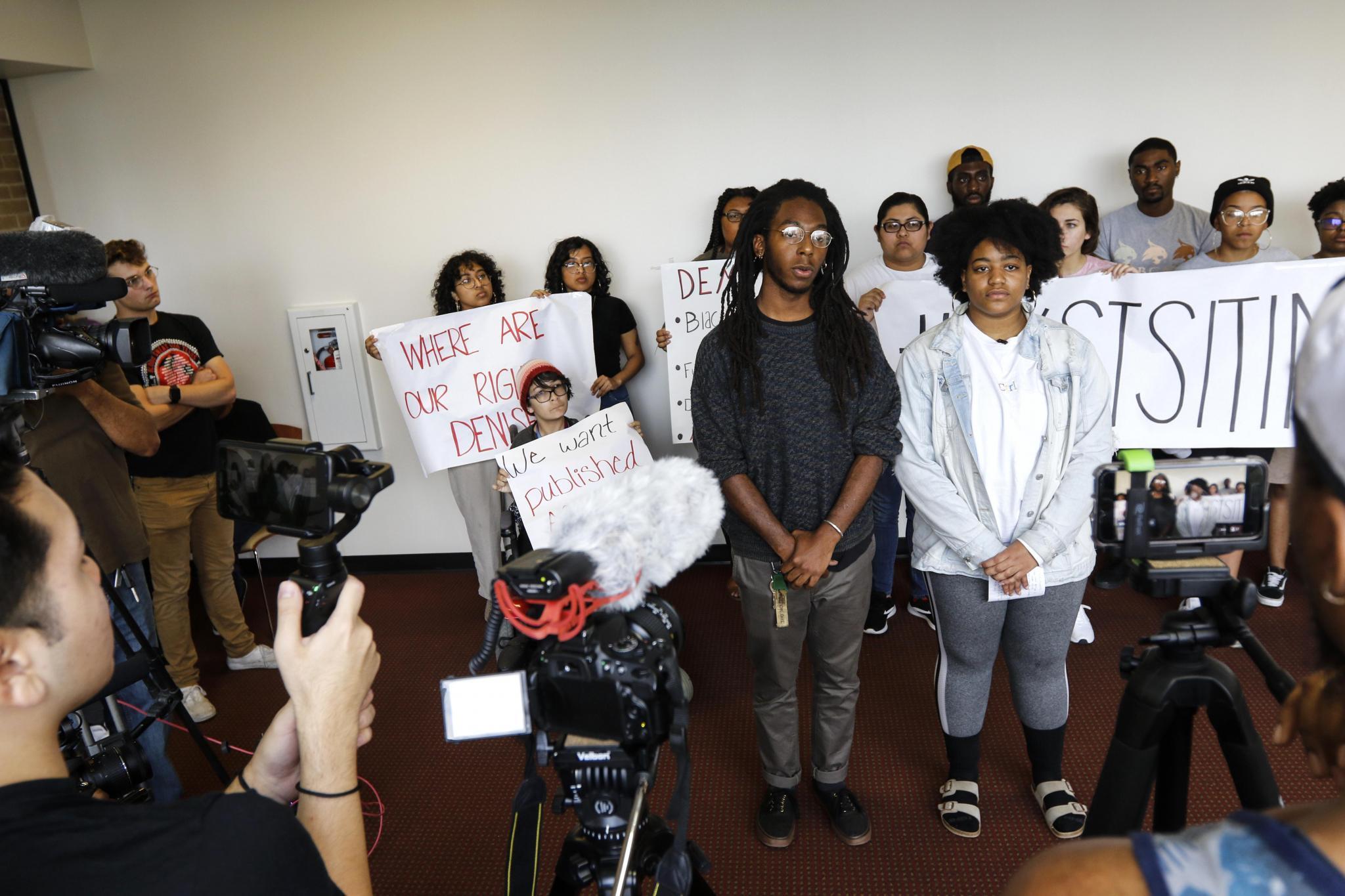 Suspicion mixed with determination and a strong desire for more change at Texas State University were the prominent sentiments voiced during a panel discussion on the Texas State Sit-In. Scott Bowman, criminal justice professor and newly appointed special assistant to the provost for inclusion and diversity, moderated the panel, which was part of the Dialogues for Activism Series held at the LBJ Museum. Claudia Gasponi of the Texas State Student Government, Cassidy Wright of the Texas State Black Student Alliance and Monica Richerson of Texas State Lambda were the panelists. San Marcos CISD trustee Anne Halsey was emcee for the event.

The three-day sit-in was a protest stemming from the failed impeachment trial of controversial Student Body President Connor Clegg. Clegg, who was eventually impeached, had called for the defunding of the University Star and the firing of numerous staff members after the student newspaper published a controversial opinion column. Protesters occupied a part of the LBJ Student Center and made a list of demands, including Clegg’s impeachment and more focus from the administration on diversity. The students’ demands were met, but University Police Department officers arrested several student protesters weeks after the sit-in, during the spring semester’s finals week.

‘I’m just waiting for the other shoe to drop’

“A mess,” is how Wright described the atmosphere on campus at the end of the semester. “It’s a mess that was tied up with a bow. Here’s this flaming ball of trash, and we’re just going to leave it here. We’re going to pick it up next semester and see how everything turns out.”

Wright said there was a lot of burnout on campus because of the energy the sit-in took to carry out.

“I wasn’t expecting to have to sleep on the floors of LBJ,” she said.

Wright said she got involved with the sit-in because she felt the student senators were not doing their job.

Gasponi, who was the impeaching senator, gave a brief history of the events that led to the sit-in, noting that at Clegg’s impeachment hearing, 19 senators intentionally missed the vote, denying a quorum.

“We have 15 white senators; 14 of them were gone,” she said, adding that the sit-in continued after the hearing because of “the longer history of abuse” and a lack of representation by either the student government or the administration.

Richerson said that her involvement with the sit-in was not high profile, but after the protest started, “In the span of like an hour I was like, ‘There’s no way that my kids can be safe here if we keep letting this happen, so we have to do this.’”

Now, Richerson said, “I’m just waiting for the other shoe to drop. Even though we got our demands met, It’s definitely not something that i trust given the history at the school.”

Gasponi said that during the sit-in, the protesters became a kind of family. She called the sit-in participants a “pocket of gold” within the campus and said that after their demands were met, she felt better about Texas State. Then, UPD arrested some of the student protesters during finals week and she changed her mind.

“People are using their power to hurt students and protect the university,” she said. “... It’s just going to get more fiery on campus. It’s going to be really scary for a while.”

The students who were arrested were charged with blocking a highway and interfering with public duties. The charges stem from an incident in the Matthews Street parking garage, where a group of protesters linked arms and tried to stop a vehicle containing two student government representatives. The protesters said they wanted answers to some questions. UPD officers escorting the vehicle intervened, and eventually the protesters moved out of the way.

Richerson said that UPD was “absolutely after us. … They were trying to get us on anything.”

When the arrests occurred, it was weeks after the protest — and during finals.

“We thought it was fine,” Richerson said, “and then it wasn’t fine.”

Wright said that campus police officers walked into the teaching theater every two hours to do a headcount. She also said a friend of hers who was doing some work for the Student Foundation, located inside the LBJ Student Center, one night encountered an aggressive police officer.

“He almost pulled his gun on her,” Wright said. “... He had his hand on his waistband.”

Wright said the officer told her friend to go back to the teaching theater, even though she had not been at the sit-in.

“They were watching us like hawks. … I was really paranoid about that,” she said.

Bowman asked the activists what change they would like to see the university make going forward.

Gasponi said, “There’s a lot of stuff that could be better on campus, and the students want that. It’s just about allocating money, usually, to make sure that happens.”

Gasponi said the sit-in participants did not realize how effective their protest would be, so even though they had a list of demands it was far from everything the students wanted.

“There’s a long list of grievances,” she said, including the absence of a vehicle with a wheelchair ramp in Disability Services.

“I think the university is making strides toward changing,” Wright said. “Some of it is about 10 years too late.”

She said the addition of an African-American Studies minor, which was one of the protesters’ demands, should have happened years earlier, and that UPD should be better trained on dealing with activists.

Another change Wright said she would like to see is a better action plan for dealing with racist staff and faculty, especially those who are tenured.

“One of my biology teachers called me ‘colored’ during office hours,” she said, and when she went to the dean to complain, the dean said there was nothing the school could do because the teacher was tenured. “I asked, ‘Are you sure?’”

Richerson said the LGBTQIA community has concerns as well.

“The Texas State student health center does not provide hormones to trans students,” she said. “And a lot of our students can’t go off campus to get health care. … They have to go to Planned Parenthood in Austin.”

Moreover, she said, there is no gender-based housing on campus.

“All housing is based on sex designated by the state,” she said.

Gasponi called for the creation of a multicultural class to teach students about what racism, sexism and other forms of discrimination are.

“It’s not about pushing the agenda,” she said. “It’s about respect.”

All three panelists voiced the desire to have a more diverse curriculum instead of teaching students only about white authors or white scientists.

Wright said that if you are a microbiology major, “The odds of you learning about somebody who’s black or brown are slim to none.”

Richerson pointed out that the curriculum simply needs to be accurate.

“If it was accurate, it would be diverse. That’s just the facts,” she said.

Richerson also said that allyship training will have an expiration date so that faculty who received training 10 years ago can get up-to-date training.

“There are no shortage of faculty who would agree wholeheartedly about the multicultural course,” he said.

Richerson said that of the faculty members who showed up at the sit-in to see if there was anything the protesters needed, few were not tenured.

“A lot of the faculty who came to the sit-in were not secure in their jobs. … They were black, brown and gay professors who were sympathizing,” she said.

Furthermore, she said, if faculty members are going to stand with student protesters, “I want more than allyship from you. I want you on the line.”