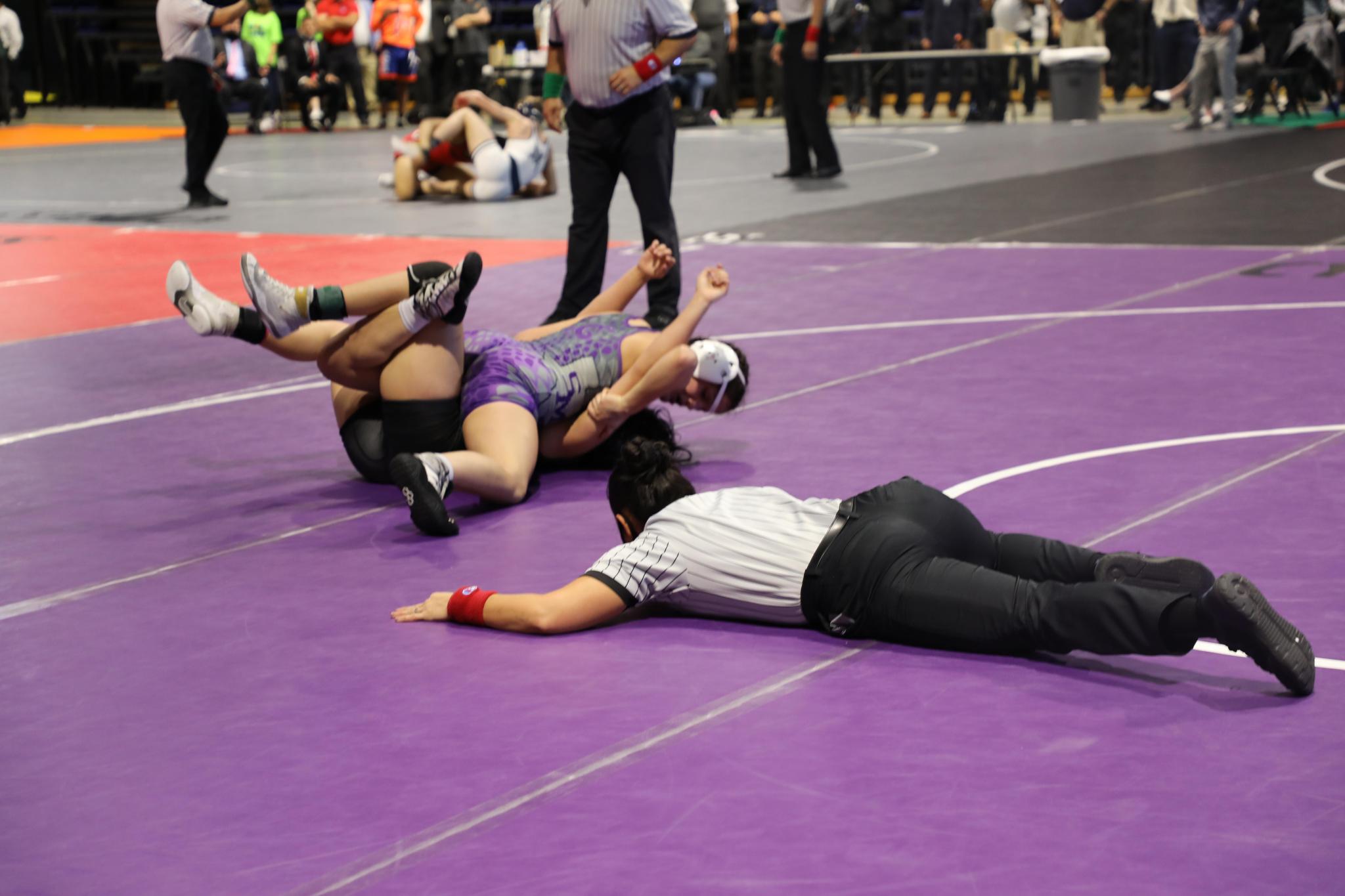 Despite taking the podium, receiving her gold medal and seeing her social media following get a bump after claiming the girls’ 138-pound title, it’s still hard for her to soak it in. She’s drained, physically and mentally.

“I don't think I've realized that I actually accomplish my goal yet,” Moreno said. “It'll probably take a while. I think like a couple of weeks, maybe a year.”

The San Marcos senior’s dreamed of being in this spot since she was just a freshman in 2018. She didn’t qualify for the state tournament as a rookie, but attended the event as a spectator and kept a close eye on the girls’ 128-pound championship. She decided that she wanted to be the one winning the final match of the season.

She improved on her 36-7 record as a freshman to 43-2 as a sophomore, finishing in third place at state in 2019. She seemed primed to be a title contender as a junior.

Moreno was ranked as the No. 1 girls’ wrestler at 128 pounds for the vast majority of 2020. She injured her shoulder just before the start of the postseason, but still went on to claim the District 26-6A and Region IV crowns in her weight class, heading into the state meet with a 38-0 record.

She won her first two matches of the tournament and was winning early in her third matchup, almost securing a pin 45 seconds in. But she grew fatigued as the match wore on. She allowed her opponent to score a takedown — the first time anyone had done so all season — and was handed her first loss of the year.

“She got tired because she hadn't been able to really practice for like three weeks with her injury,” said Frank Moreno, Gianna’s dad. “She was just doing physical rehabilitation instead of practice just so she could compete. Because her arm wasn't really lifting, at first, above her head.”

Gianna won her next match to move into a third-place bout. But she suffered another loss there, finishing the season in fourth.

“I just saw her face,” Frank said. “She was devastated.”

Last year’s losses in the state tournament left her bitter for a long time. She’d hoped to get her mind off of it by getting back into softball, which she’d been competing in longer than wrestling. But the UIL suspended play on March 16 due to the COVID-19 pandemic. Gianna only played in eight games.

Soon after, Frank’s 71-year-old father endured a medical emergency that required him to be put on an oxygen tank. The Morenos realized he would be extremely vulnerable to COVID-19’s effects if he were to contract the virus and decided as a family to put their house on lockdown, only leaving when it was absolutely necessary.

Gianna was suddenly stripped of her social life just weeks after the biggest disappointment of her wrestling career. Her parents knew it was going to be a tough time for her. But they also knew she was a tough kid and were confident she would bounce back from any low points she hit.

They learned that when she was just five years old. Gianna’s older brothers built a bike ramp out of an ice chest, buckets and plywood in their front yard. Frank watched from inside as each of the boys raced up to the ramp and chickened out at the last second, veering off to the side to avoid making the jump. Gianna didn’t chicken out, though. She flew up the ramp at full speed, caught her tire on the edge of the ramp and face planted into the dirt.

“She gets up and her mouth has started bleeding and she has dust on her face. And I'm like, ‘Oh God, here I got to go outside,’” Frank said. “Now the boys are looking at us kind of scared, looking at the house. And then she's like, ‘That was awesome!’”

Her parents were right. Quarantine proved to be beneficial for Gianna’s mental health and allowed her to grapple with the way her junior year ended.

“It might sound weird but I was in my room, just with myself,” Gianna said. “I journaled, I was just like, with my thoughts, you know? I don't even know how to explain that. But I just let the past be the past … That's just that's the best part of this whole journey, is making mistakes and learning to accept that.”

The UIL set this year’s wrestling and softball schedules parallel to each other, forcing Gianna to pick one or the other to compete in. She went with the former, unable to pass up the opportunity to go after the state title one last time.

Gianna typically plays club softball in the offseason, but focusing on wrestling and trying to stay isolated this year, she instead trained at her house with her siblings. The family had some exercise equipment on hand and Daniel Hagerty, owner of Metroflex San Marcos, sent her workout plans based on what they had. It was the longest stretch of time Gianna had gone without competing in any sport.

She moved up to the 138-pound class to add strength and scale back her weight cuts. The UIL only allowed for dual meets in the regular season but Gianna still went undefeated and claimed another pair of district and regional crowns, punching her ticket to the state tournament with a 15-0 record.

The senior faced a pair of throwers in her first two matches. The second, Olivia Crutchley from Killeen Harker Heights, Gianna’s semifinal opponent, nearly knocked her out of the bracket. With seconds left in the third period, Crutchley and Gianna were tied at 9-9. Crutchley put Gianna into a headlock and tried throwing the senior onto the mat. But Gianna reversed the move and scored a takedown at the buzzer to earn an 11-9 win.

“The way she wrestled differently from last year to this year, she was a lot more calm,” said Davina Moreno, Gianna’s mother. “Which, of course, once you get to a higher level, semifinals, things like that, the competition and stress increases exponentially. And whenever she would get in a tight position, she didn't panic. She stayed incredibly calm.” 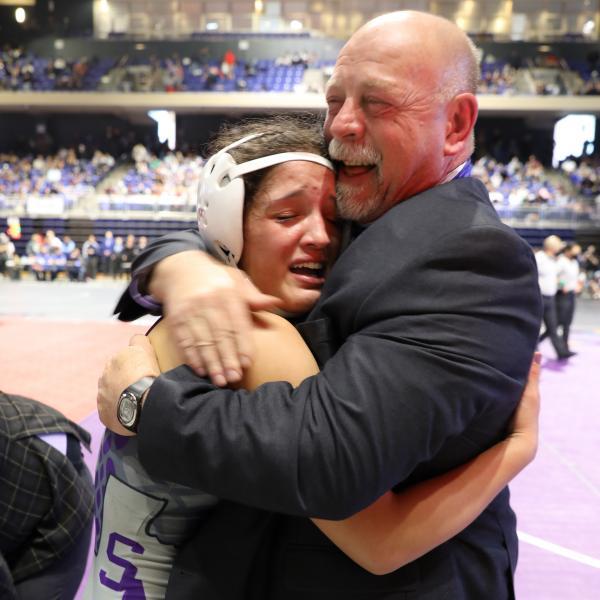 With two hours to kill before the state final, Gianna took a shower and a nap, had a bite to eat and listened to music that kept her relaxed — songs like “Unwritten” by Natasha Bedingfield. As she stepped onto the mat for her final match, San Marcos head coach Garvin Smith pressed foreheads together with her and said a little prayer.

“I was just ecstatic about everything. She came over crying. I was crying. (Assistant coach Jeremy) Cross cried. It was just a beautiful feeling. She worked so hard and deserved it and she attained her goal,” said Smith, who’s coached the Rattlers the past six years. “We've had five people place (in the state tournament). But it was a different feeling to have a state champion. It kind of makes you breathe a little bit deeper and feel a little bit more secure and know that I can do that for someone else again.”

Gianna finished her senior season at 18-0. Her older brother, Mason, set the program’s career wins record last season with 131. Gianna broke it this year, finishing with a career record of 138-11. 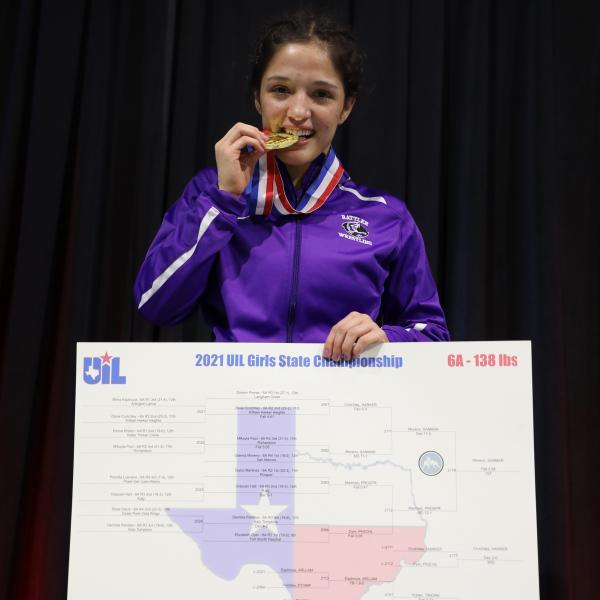 Gianna will join Missouri Valley College’s wrestling team in the fall, though she hasn't decided yet on a major. In the meantime, she’ll have to learn the nuances of freestyle wrestling to prepare for the college level — she’s only competed in folkstyle in high school.

She’ll also keep trying to soak in the results of her sacrifices.

“I've been wanting to be a state champ for the longest time and I've literally, for the past four years, I've dedicated so much to just wrestling,” Gianna said. “It feels amazing.”