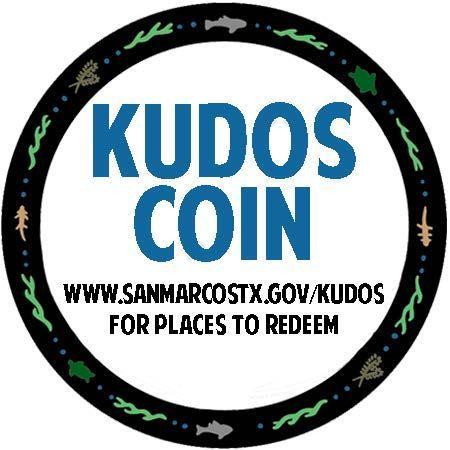 Three years ago, Amy Kirwin noticed an act of kindness from a stranger when the individual picked up a box from the side of the road.

Kirwin, community enhancement initiatives manager for the City of San Marcos, said she wanted to be able to thank the individual for doing something that most would overlook, and the “Kudos Coin” idea was born.

When the Kudos Coin program officially launches Tuesday evening, community members will be able to be rewarded for good deeds, such as picking up litter or helping a neighbor. City Councilmembers and select city staff will have coins to pass out that are redeemable at local business for a small “reward.”

“It’s really to reward positive behavior,” Kirwin said. “You know, a lot of people like to just call people out for doing stuff that's maybe not as desirable, and I think that if we can start saying 'hey thank you so much for doing the right thing’ it will help perpetuate that kind of behavior.”

After she was given a thumbs up on the program from her supervisors, Kirwin began reaching out to local businesses. Redeemable rewards are something a child, or an adult, can enjoy.

“We have a variety of businesses that have signed on and we're always looking for more that are wanting to be a part of this,” Kirwin said.

If a councilmember of staff observes a good deed, they can hand a Kudos Coin to the individual who displays an act of kindness. Kirwin said the deed could be picking up litter, picking up after an animal or helping a neighbor.

During National Night Out, the program will officially launch as councilmembers and staff will pass out coins to those who display small acts of random kindness and environmental stewardship.

“I hope it instills a pattern of stewardship for our community that is positive and giving,” Kirwin said. “Because most people in this community are, and I’m hoping it just kind of spreads the happiness and the good.”

Kudos Coins are redeemable at the following businesses: