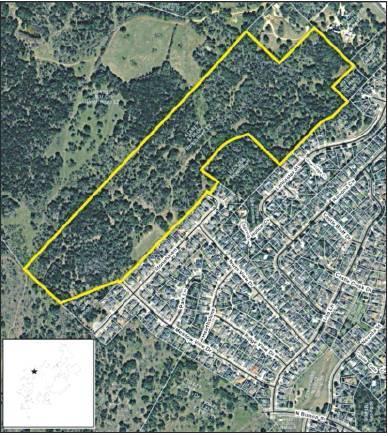 A zoning change request that would allow development on 56 acres of woodland is back on the agenda for the Planning and Zoning Commission tonight. The developers of Mystic Canyon, a proposed subdivision west of Old Ranch Road 12 and adjacent to the Castle Forest and Franklin Square neighborhoods, are asking for the change from Future Development to Single Family-6, which would allow 6,000 square foot lots and a maximum of 5.5 housing units per acre.

The commission first heard this zoning change request in May. However, numerous residents from adjacent neighborhoods expressed concerns about insufficient notice and drainage issues and residents from the city at large voiced their concerns about the site’s environmental sensitivity. P&Z then decided to postpone a decision until the applicant had a chance to do some community outreach. The applicant, Jim Ladner, has since met with the Neighborhood Commission and the Council of Neighborhood Associations about plans for the land. Opposition remains among the residents of the neighborhoods near the proposed development; a petition opposing the zoning change garnered dozens of signatures. However, city staff is recommending the approval of the zoning change.

In other business, P&Z will hold public hearings on three conditional use permits for the sale of beer and wine for on-site consumption — a renewed permit for Starplex and new permits for Umami and San Marcos Barbecue — and consider approval of the permits. The commission also will hold a public hearing and consider a zoning change request for about 15 acres in the 1600 block of Redwood Road, east of State Highway 123, from Future Development to Character District-5.

The Planning and Zoning Commission will meet at 6 p.m. in the council chambers at City Hall, 630 E. Hopkins St.