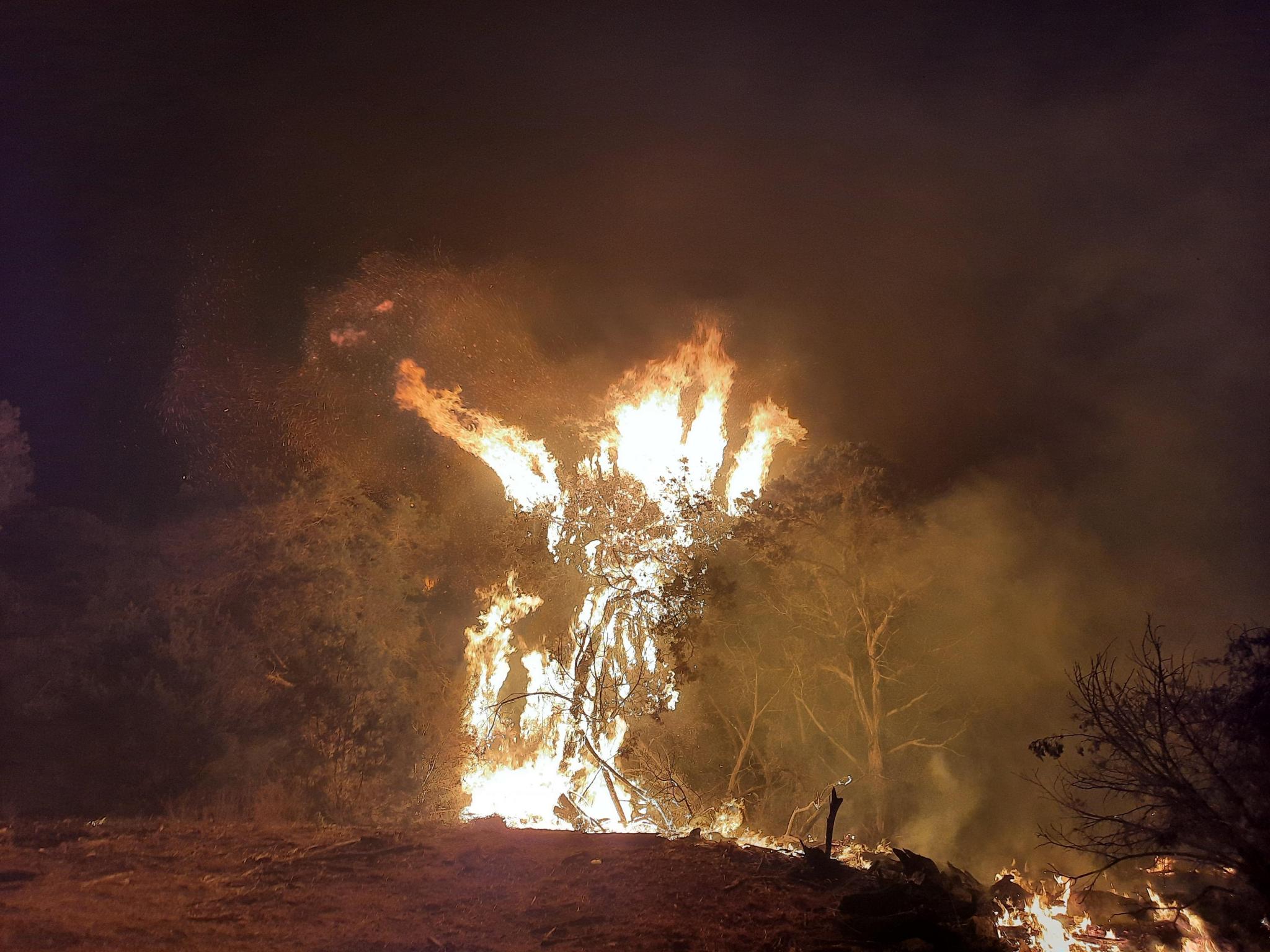 A tree displays "torching" behavior at the Hermosa Fire near Wimberley in Hays County. Torching is when the fire burns up the trunk of a tree and ignites the leaf canopy. This can be particularly challenging for firefighters as embers can blow on the wind and spread small individual "spot fires" ahead of the main fire. Photo courtesy of K. Kaschalk Texas A&M Forest Service

The Hermosa Fire in the River Mountain Ranch subdivision just outside of Wimberley was 10% contained as of 1:30 p.m. on Aug. 4.

Fourteen homes have been threatened by the fire. One has sustained minor damage. Two out buildings have been damaged. Nothing has been destroyed.

Wimberley, North and South Hays Fire Departments are working with Texas A&M Forest Service to fight the fire. There are both helicopters and planes assisting with water and fire retardant.

Due to difficult terrain, a crew of 12 military veterans from Pinhoti, Georgia are on scene physically digging a line to try and create a barrier to keep the fire from spreading.

The Wimberley First Baptist Church is available to those who have evacuated.

The fire began in the early afternoon of Tuesday, Aug. 2, moving northwest towards U.S. Highway 290, according to the Texas A&M Forest Service.

There is a Temporary Flight Restriction in place for the area over the fire.

Hot and dry conditions are expected to persist in the area with high temperatures expected to peak near 100 degrees Fahrenheit, according to the Incident Information System.

“Breezy southerly winds will continue through the period as well, with sustained speeds near 15 mph and gusts near 25 mph,” the information system stated on its website, inciweb.nwcg.gov.

Fire Chief Scott Collard with the North Hays County Fire Rescue suggested caution and alertness for those living in and near Dripping Springs.

“Everyone ahead of and around the fire needs to stay aware of their surroundings,” he said. “They can turn on sprinklers in their yards to help defend their structures. If they feel that their safety may be compromised, they should leave immediately."

The Storm Rider Fire is the second 200-plus acre wildfire to burn in the Dripping Springs area in the last month. The Gatlin Creek Fire burned over 325 acres July 6–8.

Reporting by Dalton Sweat and Madi Telschow were included in this report.