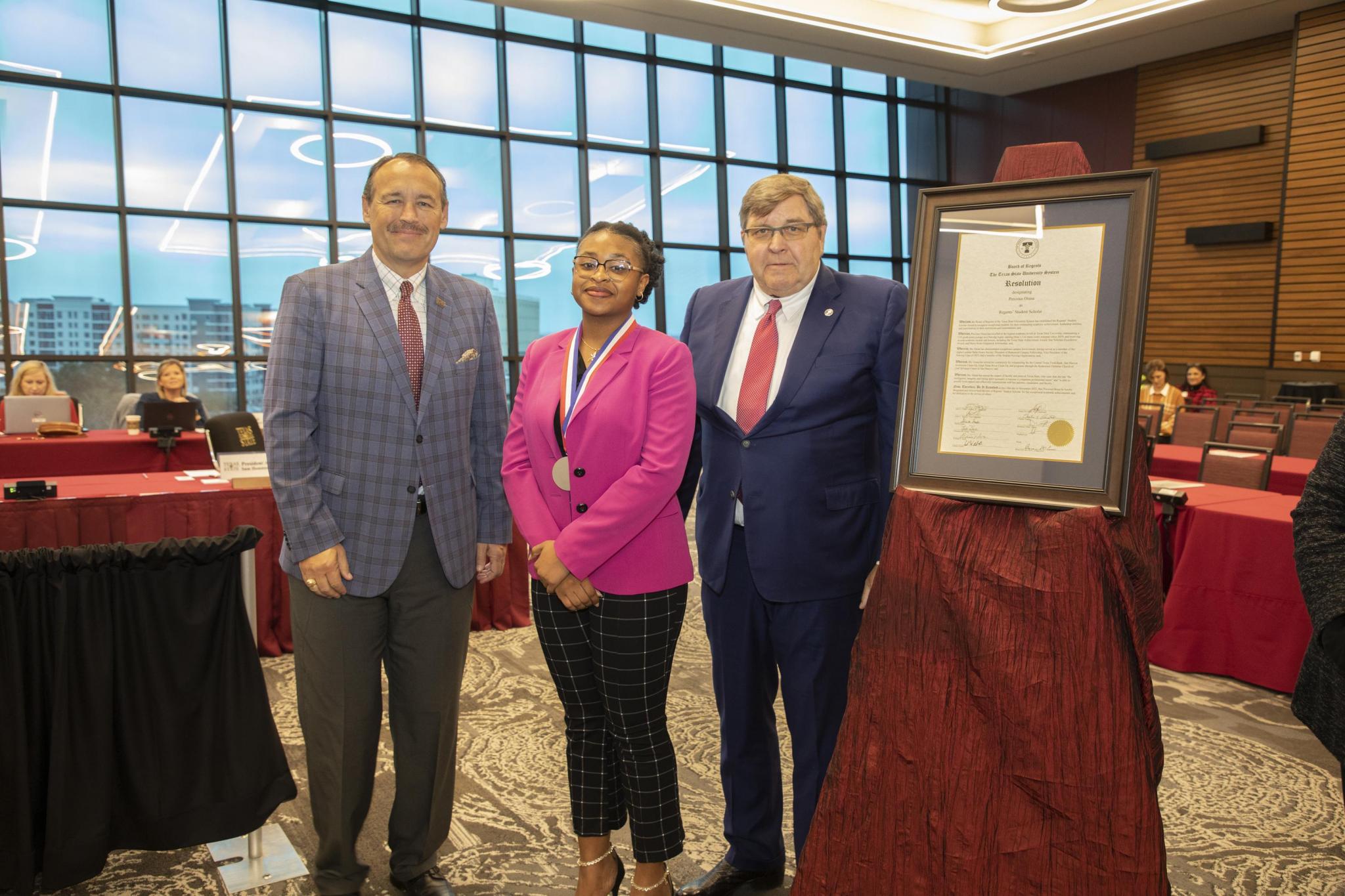 Jason Kwak and Jon Lasser were given 2023 Regents’ Professors awards. Precious Orusa was given the Regents’ Students Scholar Award.

The Regents’ Awards recognize outstanding faculty, staff and students from the seven TSUS member institutions. The board approved the honors during its quarterly meeting Nov. 18 at Texas State.

The Regents’ Professor designation honors outstanding members of the system’s professoriate who have achieved excellence in teaching, research, publication and community service, while demonstrating an unwavering dedication to their students and university.

Kwak and Lasser are the 21st and 22nd TSUS Regents’ Professors to be honored at Texas State.

It is a lifetime designation bestowed by the Board of Regents upon tenured full professors who have been acknowledged as exceptional by their peers and students, and recommended by the TSUS Foundation Board of Directors, the chancellor and their university president.

Kwak arrived at Texas State in 2008 from Texas A&M University-Kingsville. He received his degrees in piano performance from Eastman School of Music and the University of Texas at Austin. 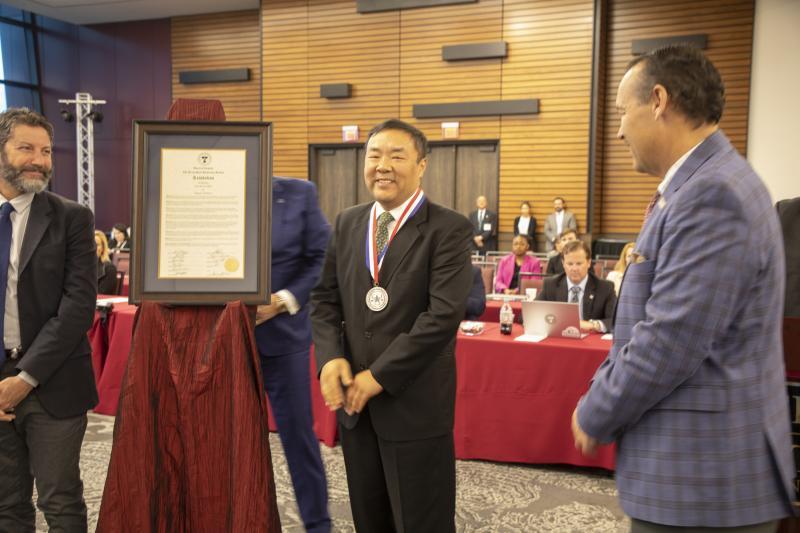 Above, Jason Kwak was recognized with a 2023 Regents’ Professors award.

Kwak has built the Texas State International Piano Festival into a world-renowned event featuring pianists from 42 countries and six continents, while raising more than $500,000 in private funding to support the event. National Public Radio’s show, From the Top, broadcasted the event in 2013 and 2019. Kwak has also organized and hosted the Texas State Young Artist Piano Competition, co-founded Trio 488 and adjudicated 45 regional, national and international piano competitions since 2008.

Kwak approaches instruction with the intent to maximize students’ potential. In addition to recruiting students from the U.S., he has recruited from South Korea, China, Hong Kong, Indonesia, Malaysia, Italy, Mexico, Costa Rica, Nicaragua, Lithuania, Taiwan and Ecuador. Through his teaching and mentorship, several of his students have won competitive national and international piano competitions, successfully completed doctorate degrees and gone on to become faculty members in higher education. He was inducted into the Steinway and Sons Teacher Hall of Fame in 2021 and was given the Outstanding Collegiate Teaching Award from the Austin District Music Teachers Association in 2018. 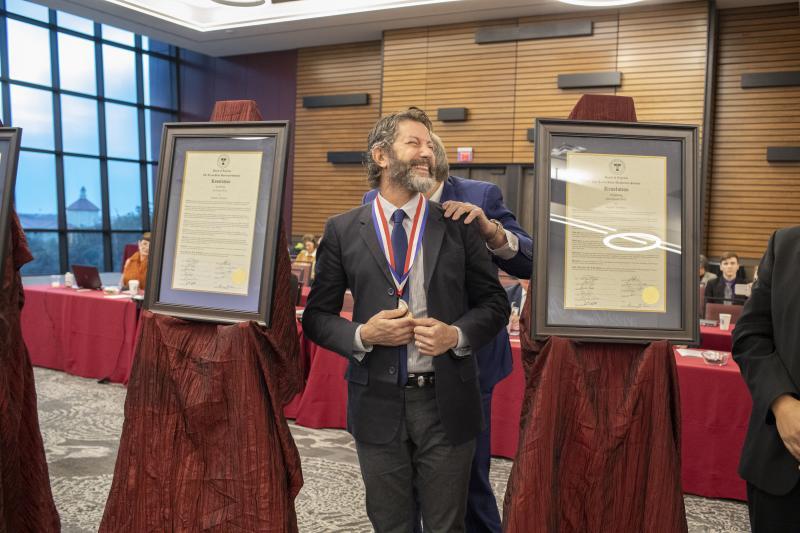 Above, Jon Lasser was given a 2023 Regents’ Professors award.

He served as program coordinator for the bilingual, accredited school psychology program for seven years, chaired the Institutional Review Board for nine years and was associate dean in the College of Education for three years.

Lasser has authored seven books translated into five languages, eight book chapters and 42 peer-reviewed articles ranking him among the top 10 scholars in his field’s specialist faculty. He has received 12 grants with funding totaling nearly $2.5 million, presented 160 refereed and invited presentations and served on several review boards. His acclaimed School Psychologist as Counselor book has become the standard text in the field of school psychology. His book, Professional Ethics in Midwifery Practice, has been described as a must read for practicing midwives and his Grow Happy, Grow Grateful and Grow Kind series is widely used in schools, libraries, counselor offices and homes to encourage empathy in young children.

Orusa, who is the sixth Regents’ Scholar at Texas State, is a junior from Nigeria. Regents’ Scholars are selected by the chancellor based on outstanding academic achievement and scholarship, leadership abilities, and contributions to the institution and their community. In addition to a framed resolution and medallion, Regents’ Scholars receive $2,500 credited toward their educational expenses.

Orusa is a member of Phi Kappa Phi honor society, Alpha Lambda Delta honor society and the Student Nursing Organization. She was elected vice president of the nursing class of 2023 and serves as president of the Redeemed Campus Fellowship. Her volunteer activities include the planning committee for the nursing class of 2022 pinning ceremony, Central Texas Food Bank, San Marcos Downtown Clean-up and the Great Texas River Clean-Up.