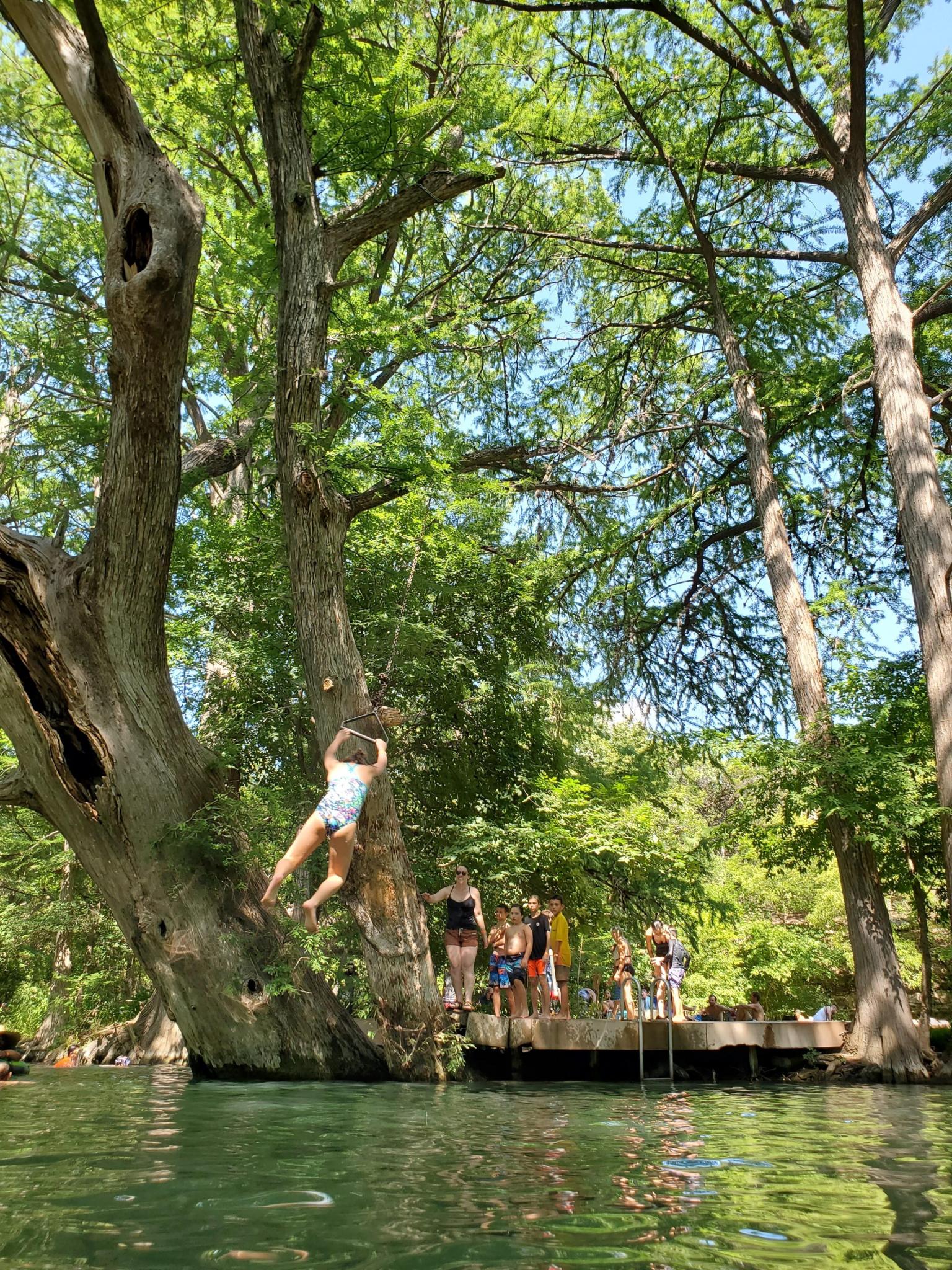 This follows the announcement last week that flow at Jacob’s Well stopped. Jacob’s Well is the headwaters of Cypress Creek, which is the creek that runs through Blue Hole Regional Park.

“Anything that happens with Jacob’s Well and upstream from Blue Hole affects Blue Hole directly,” Richard Shaver, director of Parks and Recreation for the city of Wimberley, said. “Because of the zero flow, there is no input. There is no water coming into Blue Hole, and I’ve noticed downtown the creek is starting to dry up. There is nothing leaving Blue Hole either.”

Cypress Creek below the bridge in the Wimberley Square is essentially dry. There are other small springs that feed Cypress Creek outside of Jacob’s Well, but they produce so little water they are measured in gallons of water per minute, as opposed to the traditional measurement of water flow of cubic feet per second. Due to some of that limited flow and other factors like the cypress trees protecting the water from sunlight, Blue Hole has remained swimmable for a longer period of time. The Meadows Center for Water and the Environment at Texas State University tests the water at Blue Hole for E. coli every week. Numbers above 394 E. coli parts per 100 milliliters is considered unsafe for swimming. Over the last month, Blue Hole tested at 46, 64 and 16 until the most recent sample that returned on Monday of this week, which measured at 1,737. This measurement shut down the park for swimming. There is a chance that something besides the low flow conditions caused the issue, but either way, the water is not considered safe for swimming at this time according to typical water quality standards.

“That number is extremely high,” Shaver said. “It could be a fluke. There could be something in the water like a dead animal upstream, but even if it is a fluke, whatever is in the water that causes those numbers is not going away until we receive a significant amount of rainfall.”

If conditions do not improve, swimming could be suspended for an additional two weeks.

“We are unable to predict if Blue Hole will open again for the 2022 season,” a statement from the park said. “We will continue to monitor these conditions and update via email for those with swimming reservations as well as on our social media pages.”

Blue Hole announced that it will be issuing 100% refunds for all swimming reservations during the closure. Blue Hole Nature Camp will continue, but swimming will not be allowed.

All other recreational amenities at Blue Hole will remain open including hiking and biking trails, playgrounds, and sports fields.

For updates on Blue Hole, follow the park on social media or visit cityofwimberley.com.

With Jacob’s Well closed for swimming also, water recreation options are getting few and far between, but there are still ways to swim in Wimberley.

7A Ranch sells 50 day access passes to swim in the Blanco River. The passes cannot be reserved ahead of time and are sold day on a first-come, first-serve basis beginning at 10 a.m. Day passes cost $15 per person Friday through Sunday and $10 per person Monday through Thursday. Children five years old and under are free. Pets are not allowed. Cooking grills, open flame and glass containers are not permitted.

Cypress Falls Swimming Hole is still open for swimming as well. The swimming hole is located at 50 Marina Circle just outside of the Woodcreek city limits. It is open from 9 a.m. to dark. It is $8 per person though a Wimberley local with ID is $2.