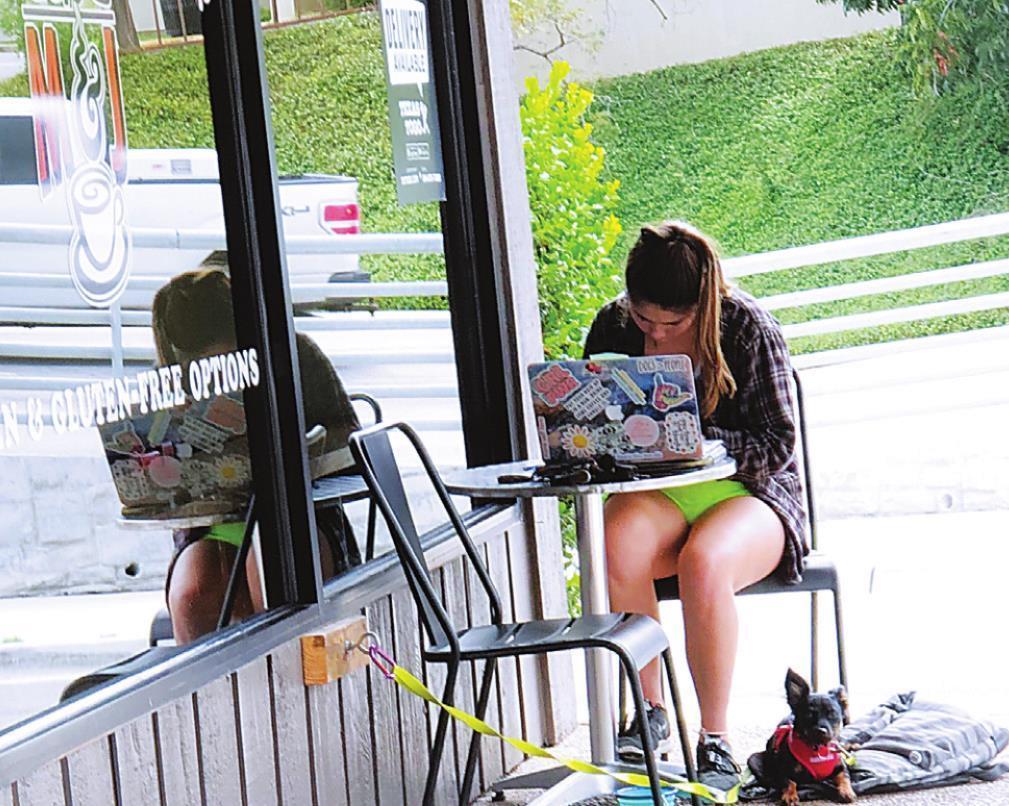 Above, a Texas State student studies outside of Mochas and Javas on Friday. Businesses like Mochas and Javas have seen improved business with students back in town. Daily Record photo by Lance Winter

San Marcos has ranked in various studies warning against the financial impacts of COVID-19 in college towns. Local businesses are overjoyed with the return of students, but many said the closure of the river was much more of a contributor in business slowdown.

San Marcos ranked 10th on Business Insider’s list of the 30 college towns in the U.S. that could be hit especially hard financially if their universities didn’t reopen this fall due to the novel coronavirus or must close again after reopening. It also ranked ninth in a SmartAsset study of college towns most economically impacted by COVID-19.

The annual economic impact of the university on Hays County from direct spending by Texas State, its employees and students was $1.1 billion per year in 2014 and 17,000 jobs. Forty percent of the total population are students.

Since students have returned to campus for classes both online and in person, many local businesses have flourished.

Mochas and Javas is happy to see their regulars return for a caffeine boost and a quiet place to study or this year, to watch Zoom classes. They are seeing 40-60% of the level of business they were seeing this time last year.

“The atmosphere does a lot for people to get things done, it's probably the caffeine,” said Marketing Director Grace Mills. “We have seen a gradual but significant increase since the semester started.”

Mills says this was a particularly quiet summer and led to their closure for a good portion of the summer.

Businesses like Mochas and Javas located closer to campus are generally more dependent on students for business, Bobcat Quickie was no different.

“The beginning of COVID hit us pretty hard,” said Bobcat Quickie owner Feras Abuhweij. “After that, the summer was really tough. Nobody was in our side of town. As soon as the students came back, business picked up but not as much as normal. We are about 60% of what we used to do.”

Abuhweij said the nail in the coffin for their summer sales was the lack of tourists. They normally serve many river-goers for beer, ice and tacos. This summer they experienced a 70% decline in business compared to a 10% decline in most summers with the normal student exodus.

Industry’s owner Harlan Scott echoed that business over the summer was different without tourists coming to the San Marcos River, but they held steady thanks to regulars. “The local community really turned up for us this summer,” Scott said. “The students coming back has helped business but it was not a noticeable boost. September is usually the slowest month of the year because the tourists stop coming, but the tourists weren’t coming this summer because the river was closed.”

The San Marcos River Park has been closed since June 25 to prevent the spread of COVID-19 but will reopen starting Sept. 16. River tubing businesses have been closed due to an order from Gov. Greg Abbott and remain closed.

Some businesses that are less dependent on students, like Alvin Ords haven’t been affected too much by the pandemic or by students coming and going.

Barefoot Outfitters was in a similar situation, experiencing the normal summer fluctuation without the student population. Owner Jackson Harris explained that downtown San Marcos businesses are not totally dependent on students, but really benefits from them being in town.