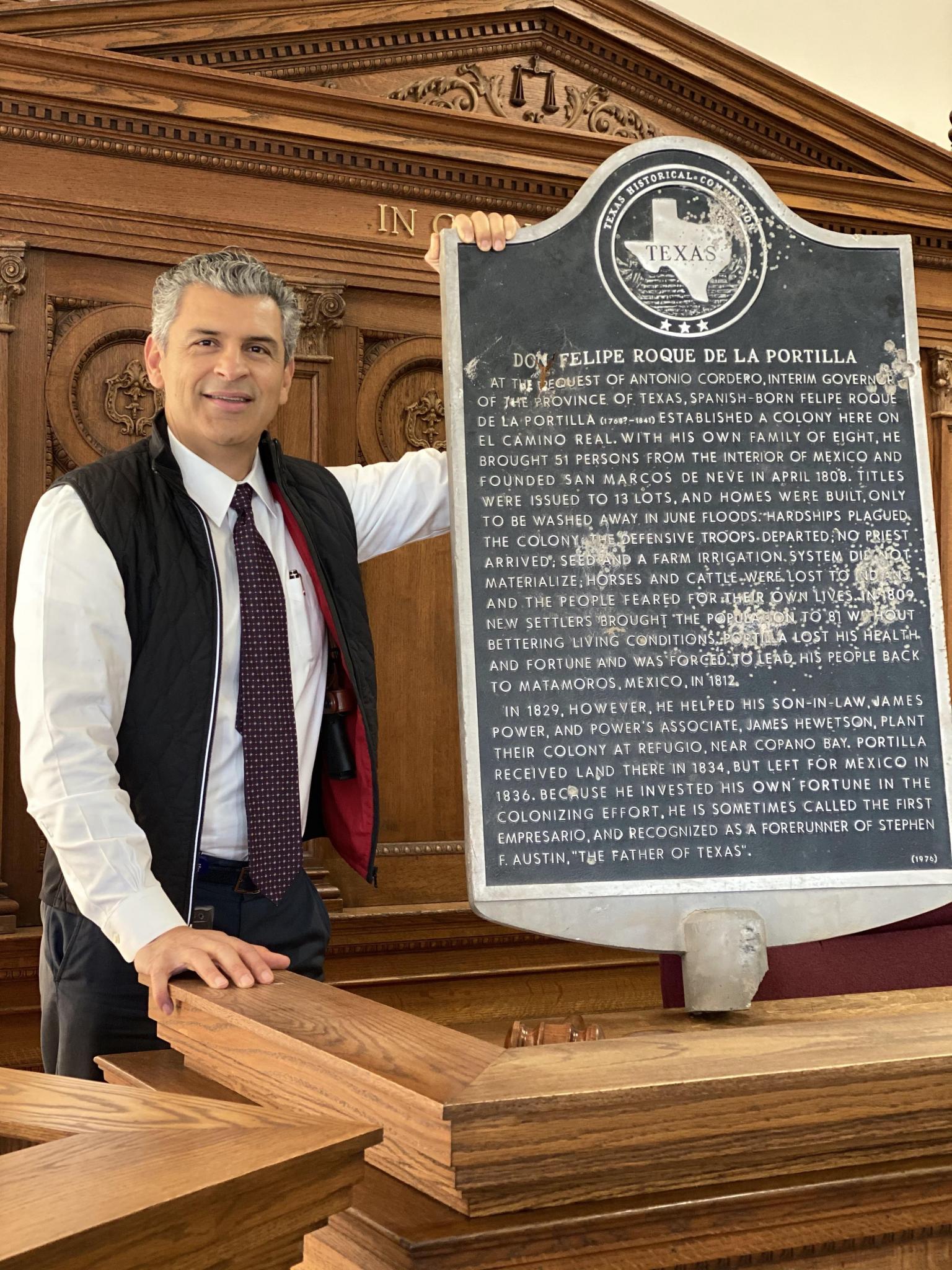 A historical marker recognizing the site of the first town in San Marcos will be unveiled during a ceremony on Saturday, Jan. 28.

The Don Felipe Roque de la Portilla historical marker, which was originally installed at the site of San Marcos de Neve on the El Camino Real in 1976, was vandalized and eventually brought down after it was struck by a vehicle in 2018, according to Hays County Judge Ruben Becerra’s office.

The marker was picked up by the Hays County Transportation Department and placed in a storage locker where it remained until February 2020. Becerra’s office said the county judge brought the sign into his office after he learned there were no plans to restore the marker as a “constant reminder that the story of our original Tejano or Mexican colonists needed telling.”

An effort by Gina Alba-Rogers, Chair of the Council of the Indigenous and Tejano Community, with support from Texas historians such as Dr. Frank de la Teja — a professor emeritus and distinguished professor of history, who has had a lengthy role with the Texas State Historical Association — proposed updates to the narrative and to replace it.

The Texas Historical Commission recently approved the recommended updates to the markers, the judge’s office said. The Don Felipe Roque de la Portilla historical marker has been installed with a complete story of this original settler’s shared history.

“The dedication aims to promote the  preservation of Hays County’s historic and cultural resources,” Becerra’s office stated. “Judge Becerra and the Commissioners Court  have determined that transparency and inclusiveness are a part of all historical recognitions in Hays County.”

Alba-Rogers’ research included additional information and an 1809 Census that listed 82 people who settled at the Villa de San Marcos de Neve on the El Camino Real.

Portilla brought 52 original settlers, including his wife María Ignacia (de la Garza) and their eight children, from the interior of New Spain in two groups. The first group departed Matamoros, Mexico, on Dec. 8, 1807, arriving at the new settlement of San Marcos de Neve on Jan. 6, 1808.

Titles were issued to 13 lots, and homes were built around a central plaza, only to be washed away in floods. Horses and cattle were lost to raids by the Comanche and Tonkawa. Portilla wrote that these groups  often “camp in the place set aside as the pasture and in the center of town.” An 1809 census listed 82 people  and 1,771 animals; the population peaked at 91 with the second group’s arrival. Portilla was forced to lead the  settlement back to Villa del Refugio in 1812. The livestock left behind created a large population of wild cattle and horses.