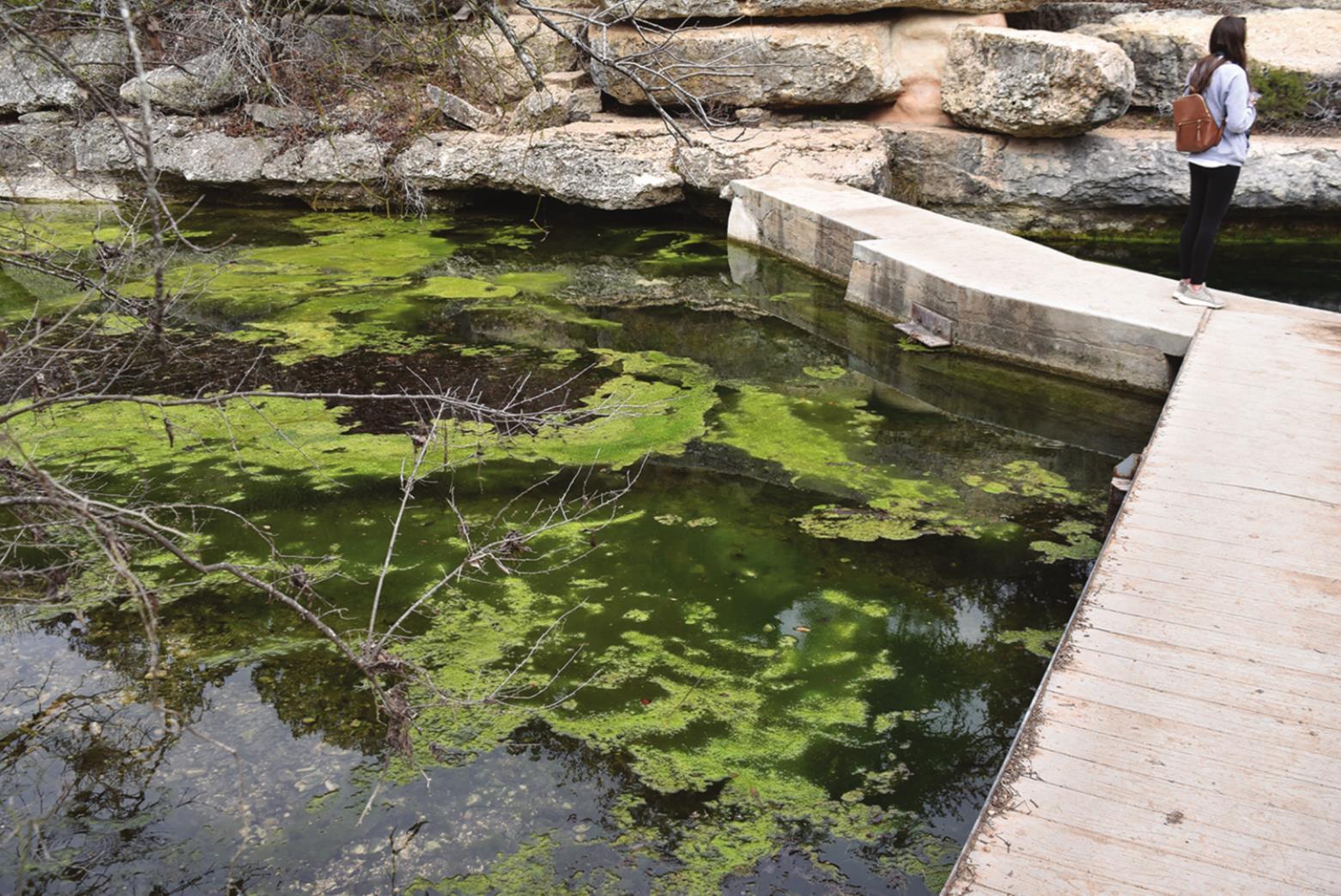 The high side of Jacob’s Well still has a pristine look but the lower side of the water way shows the signs of extremely low flow and algae blooms. Photo by Gary Zupancic/Wimberley View

For the fourth time in the last 16 years, which is when a continuous gauge was installed for the United State Geological Survey, the monitor gage at Jacob’s Well reported zero flow.

“The significance of the fact that USGS reported a 0.0 cubic feet per second flow is that the groundwater system in the Middle Trinity aquifers are at historic low levels,” Robin Gary, managing director of Wimberley Valley Watershed Association, said. “The springs show the force of the groundwater coming out and if there isn’t that supply of water, it won’t come out. That water is what all the well owners are using. We are a groundwater-supplied community, and our springs show us what is happening underground. This is the window into the aquifer.”

When the flow of Jacob’s Well dips, it causes problems throughout the ecosystem downstream. In 2020, Cypress Creek was added to the Texas Commission of Environmental Quality list of impaired waterways. The issues noted are low amounts of dissolved oxygen in the water, which leads to issues for both fish and other organisms that live in the creek.

It may seem odd to be comparing the current groundwater levels to some of the worst years of drought in Texas history. Wimberley View Weather Reporter Raymond Schiflett recorded 19.17 inches of rain in 2011, which was the second lowest total he has recorded in the Wimberley Valley in around 40 years. But 2020 was a different story. He recorded 40.50 inches of rain.

“Despite the 40-plus inches of rain in 2020, a lot of that came at the beginning of the year,” Charlie Flatten, General Manager of the Hays Trinity Groundwater Conservation District, said. “When the rain stops, that impacts the rate of flow but it is also the amount of pumpage in that springshed (around Jacob’s Well).”

Gary agreed that this was a “sneaky” drought.

“On the surface, it doesn’t look like as if much drought has happened,” she said. “It is not as evident, but when you start looking at the groundwater levels and spring flow, it is very evident this is a groundwater drought. There have been periodic rains that have been enough to keep trees and vegetations wet and working, but those rains haven’t been long enough or hard enough to generate much runoff, which would recharge the aquifer system.” The monitoring wells throughout the Wimberley Valley tell a similar story. The well near Old Baldy Park hit record lows in the summer of 2020. Records for the well go back to 2006.

“It has bounced back a bit since then, but even right now it is lower than in 2009 or 2011,” Keaton Hoelscher, Geotechnition with HTGCD, said. “That has been a trend lately. The wells have bounced back a bit from the summer, but nothing substantial.

“Generally speaking, it is a bit concerning when we have wells with 15 to 20 years of records, and we are seeing some of the lower numbers we’ve seen. The longer these trends go on… it might be an indication that the groundwater levels are steadily declining. It will take more data, but we are seeing lower numbers in recent years.”

The HGTCD began the implementation of the Jacob’s Well Groundwater Management Zone in 2020, which covers an area north and northwest of Woodcreek that is considered part of the springshed for Jacob’s Well. The zone requires permitted users to curtail water use when Jacob’s Well’s 10- day average drops below six cfs. A 10-day average of five cfs means those users should use 20% less water compared to historical usage. An average of three cfs bumps that up to 30%. That process was initially triggered in August of 2020, and has steadily become stricter as the months of low rain totals drag on and reached the 30% curtailment threshold in November of 2020. The HGTCD is not scheduled to begin official enforcement of the JWGMZ restrictions until March of this year, but Flatten is optimistic that the people who have participated in the new program have made a difference.

“I can’t quantify what our curtailment requests or mandates have done for (Jacob’s Well), but we haven’t had any reports of dried water wells in that area,” Flatten said. “So I would say the zone is providing that service when we are asking to cut back.”

“Our wells that are in the GMZ, we have not seen a reduction in (our ability to pump,) which means we are able to keep up with our pumpage,” Brent Reeh, Central Texas Area Manager for Aqua Texas, said.

One of the six wells Wimberley Water Supply Corporation uses to supply customers with water is within the Jacob’s Well GMZ. Garrett Allen, General Manager of WWSC, said they comply with the district rules when it comes to curtailments both district wide and within the management zone. Wimberley Water is currently implementing stage 2 water restrictions, which are intended to have a 20% reduction in water usage. Wimberley Water also has year round voluntary water usage guidelines in an effort to reduce water use.

This is not the first time the spring flow at Jacob’s Well has essentially ceased. Measures have already been taken to try and keep it from happening again. Some feel that there are still steps to be taken in the future.

“At six cfs, five cfs and three cfs we have already gone through three fire drills, because we smelled smoke,” Gary said referencing the points the Jacob’s Well GMZ begins to require curtailments. “To protect community groundwater supplies, spring flow, and streamflow, we need to take steps before we get to zero flow. Alternate water supplies, coordinated water conservation during drought, and beneficial reuse are all tools that can help protect our shared water resources.”