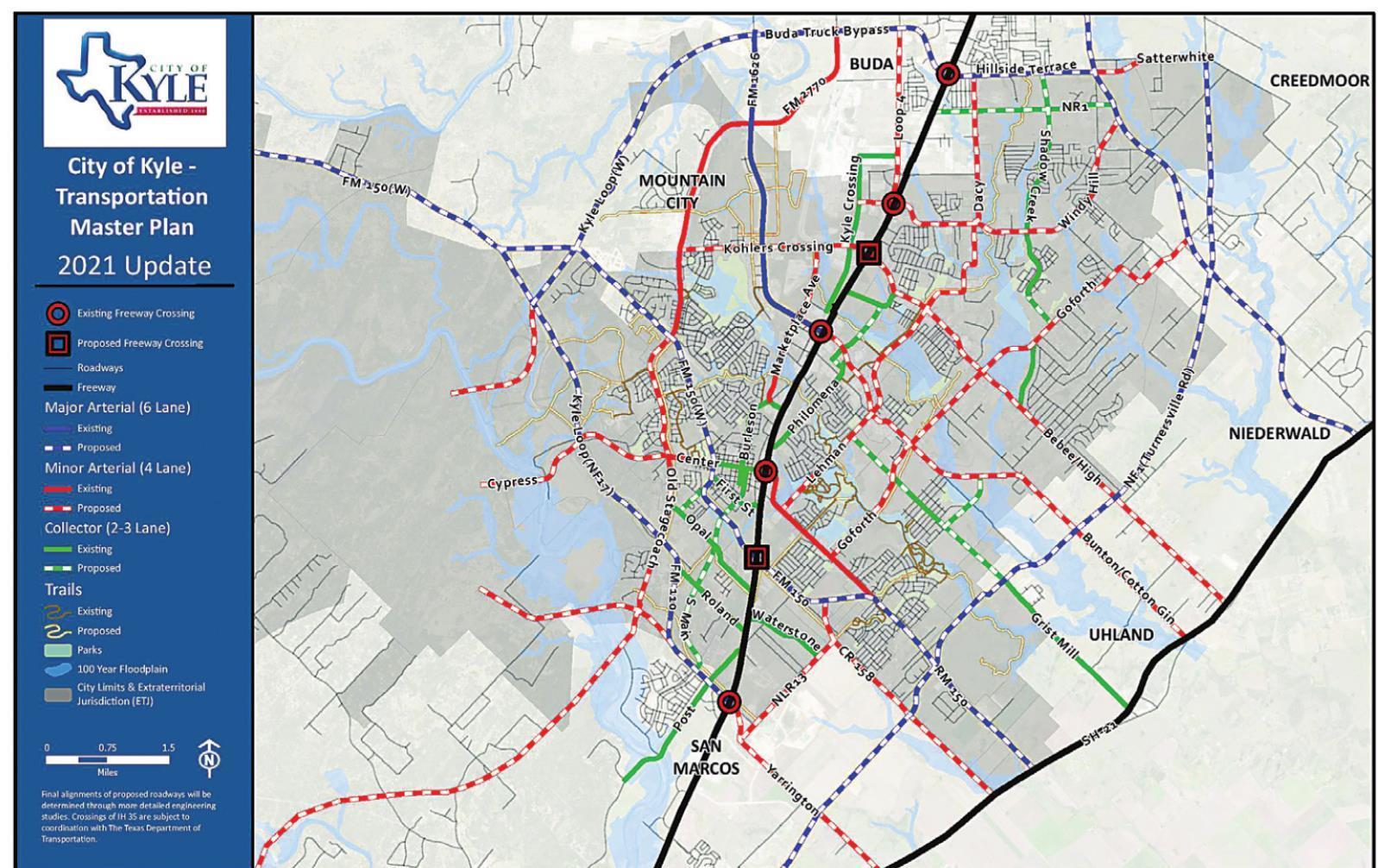 The Kyle City Council was presented with an updated 2021 Transportation Master Plan and approved coming roadway changes with Kyle’s future in mind during Tuesday's meeting. Map courtesy of the City of Kyle

As Kyle grows, so too does the need for change.

“Development is happening, and it’s happening at such a rapid pace that businesses and development are encumbering the right-of-way to a point where it’s going to be difficult to expand in the future as growth continues,” Dean said. “The last master plan was in 2015. Growth has since exceeded expectations, and as a result, the plan is not keeping up now.”

The 2021 Transportation Master Plan proposes two freeway crossings, several arterial roads with six, four or two to three lanes, sidewalks and trails. The plan, which focuses on connecting the town east and west of Interstate 35, is subject to change depending on final engineering and funding flexibility.

“These are proposed roadways that we’re gonna build in the future,” Councilmember Robert Rizo said to reassure concerned land and property owners that may be affected by some road changes. “It’s not something that's gonna happen tomorrow. These are things that as we are growing, we need. It could be 20 or 30 years before some of these proposed roadways happen. But we’re identifying the areas that need these transportation improvements.”

“We want to honor and respect the land and property owners of Kyle, but we can’t bury our heads in the sand and pretend that Kyle isn’t growing the way that it is,” Councilmember Ashlee Bradshaw added. “I can appreciate being proactive with this master plan and securing as much land that is unclaimed as possible so that we aren't forced to interfere anymore that we’d have to in the future.”

The plan emphasizes active planning by the city to prepare for continuous growth, right-of-way preservation, partnerships with other agencies for funding, and ways for developers to pay a proportional share toward right-of-way dedication, traffic impact and needed improvements.

“What scares me is not just the development, trucks and congestion that we have, it’s the fact that half our city or more is undeveloped land that’s currently in the process of being developed,” Mayor Travis Mitchell said. “I think about our residents and what’s in their longterm best interest. If you approve subdivisions but don’t approve roads, don’t plan for roads, don’t plan for connectivity, but allow the development to come, you end up like Austin. You end up like a city filled to the brim with congestion. The only way that I know to handle that responsibly is to be as proactive and forward-thinking as you possibly can.”