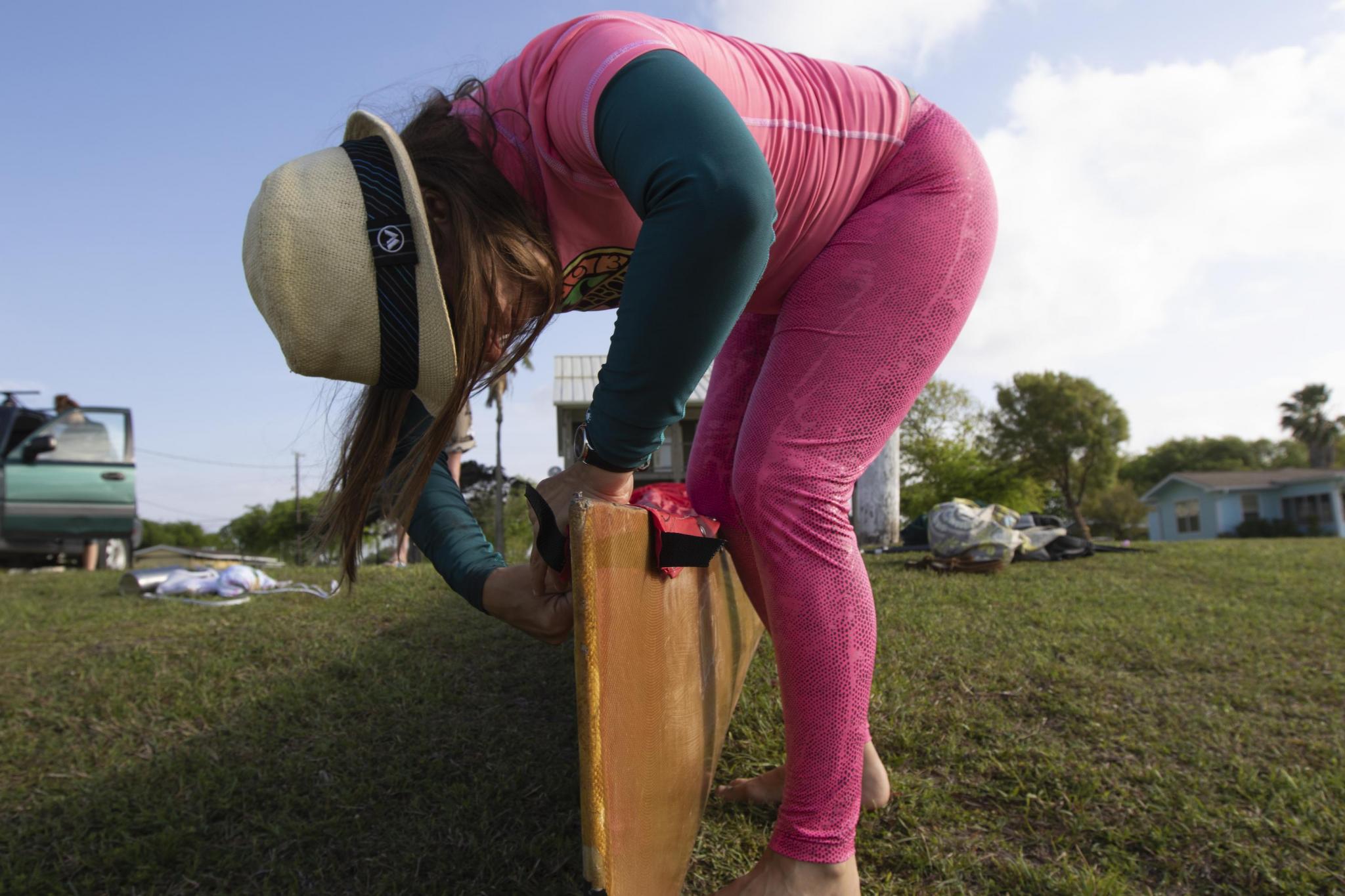 Fighting a strong wind, Kelly Stone works quickly to snap a skirt onto Aunt Flow, the USCA C-1 boat she’ll be racing in during a training run in Seadrift, Texas. The skirt will help keep water out of the boat as Stone navigates the choppy waters of the San Antonio Bay. Daily Record photos by Denise Cathey

Kelly Stone makes her way down the stairs of her apartment building on South LBJ Drive to the parking lot below as she does several times a week. She carefully uncovers her rented C-1 boat and secures her GPS and other items.

Almost throwing the boat up into the air, Stone catches it and heaves it onto her shoulder and begins walking the three blocks to Veramendi Plaza Park. There she’ll start her next round of training for the Texas Water Safari, the toughest canoe race in the world.

Texas Water Safari is a 260-mile race that starts at Spring Lake on the second Saturday in June. Racers have just 100 hours to get to the finish line in Seadrift, while navigating rapids, log jams and the limits of human endurance to claim the coveted bragging rights of finishing the race. 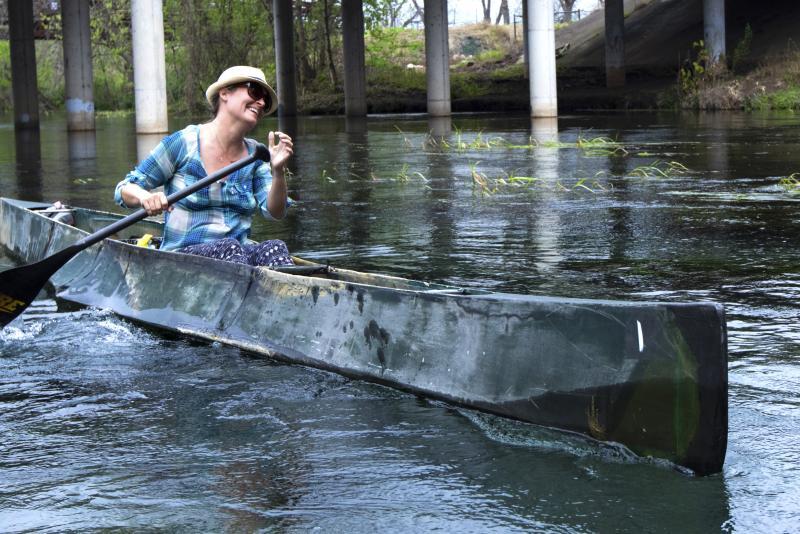 While Stone competed in 2016, she’s only ever done the race as a tandem competitor or as a team captain for another racer’s support team. This will be Stone’s first year to tackle a solo run, competing entirely on her own outside of a land-support team to provide her with supplies and encouragement. Part of the decision to solo this year came from her family.

“My older son, Mayne, got really excited and interested in paddling and whatnot and immediately he was like ‘I want to do that,’” Stone said.

Per the races’ rules, Mayne, at age 11, can’t sign up yet or be officially involved in the competition even as a team captain.

“The youngest you can be is 13 to Safari. So that’s where I realized it would be responsible parenting of me to do it myself if I’m going to take my kid down it later,” Stone said.

Mayne has been drafted as a member of Stone’s team, Lady Prob, to help keep her supplied and motivated during the race.

“I got on my mom’s team because I really want to be in the Water Safari. So really my mom just let me try it out and see if I liked it or not, ” Mayne said. 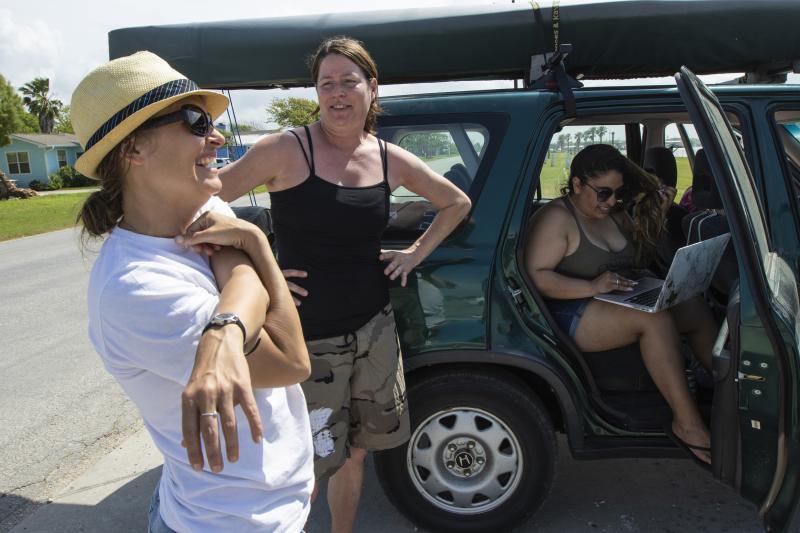 After a morning of practice, Kelly Stone takes a break with team captain Tara Pustejovsky, and Kristin Gonzalez at their vehicle as they plan their route to go over supply drop points on their trip back to San Marcos.

Responsible parenting isn’t the only reason Stone is making this run on her own.

“Only six women have ever finished in a C-1 so that’s pretty sexy to me to be the seventh,” Stone said. For this year’s race, Stone will be just one of two women who have signed up to compete in the USCA C-1 class.

Racers can pick from a variety of boats and canoes as long as they use only human-powered propulsion. But a USCA C-1 boat presents an extra challenge for any racer: The boat doesn’t have a rudder.

“The rudder helps you turn and cuts through the water a bit more. Since it doesn’t have that, you have to rely on skill with the paddle and turning with the paddle. It’s also wider, which makes it more stable, but it’s difficult to turn.”

In preparation, Stone has been in intensive training practicing different sections of the course and improving her own endurance so come race day she’ll be ready.

“I’ve been carrying the boat three blocks to the river, putting in a Veramendi Plaza Park at the train bridge,” Stone said.

Then once she’s in the river she takes her boat “... paddling upstream to the falls, downstream to Rio Vista, back up upstream and then carrying the boat back” to help her increase her speed and paddling skills. 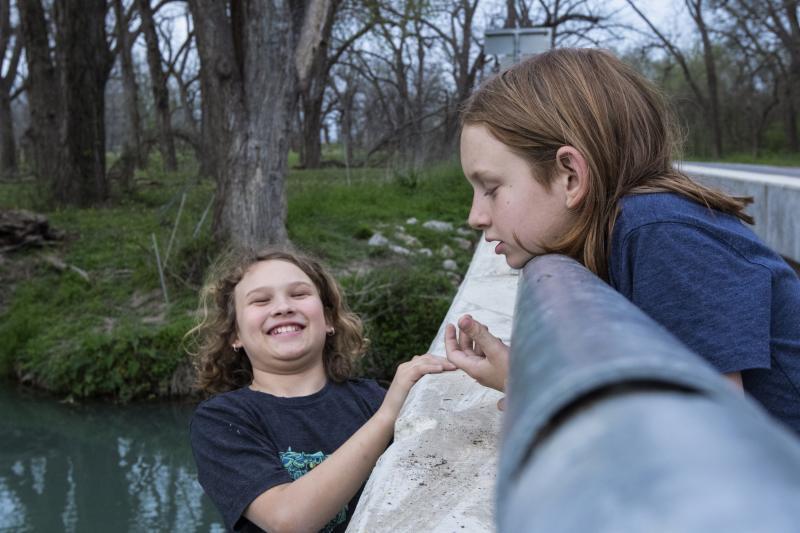 Stone’s sons, Mayne and Denly, wait for their mother to finish that day’s paddling session on the bridge before Staples Dam.

Stone and her team captain, her friend, Tara Pustejovsky, have also been trying to prepare for her needs once the race starts. Per the rules, a racer’s team captain can only give them food, water and medicine when they meet at pre-set checkpoints.

At a minimum, Stone needs to consume 250 calories an hour just to keep her energy up, as she can’t stop paddling for long to make the time deadline. At some point, she’ll also probably start hallucinating.

“They don’t sleep for days and they start hallucinating and seeing things,” Pustejovsky said.

So it’ll be her job to keep Stone supplied and on course no matter what happens. “I’m responsible for her. So I need to make sure that I’m where I need to be and doing what I need to do,” Pustejovsky said.

Despite the challenges, Stone is undaunted in her desire to see it through. “I think the sense of ‘I did it’ is a really cool thing and it puts you on a very, very short list of people who have.”

Specifically, she hopes to raise awareness for issues close to her heart. “One of my goals is to raise awareness about issues that women go through, particularly menstrual justice,” said Stone. To that end, her boat, number 99, will be racing as “Aunt Flow.”

Her partner Chris Champion, who has solo-ed the Water Safari multiple years, isn’t worried about her performance.

Beyond her family and bragging rights, Stone has another force pushing her to the finish line, her comedy. For racers who finish before 75 hours, there is a special banquet with an award ceremony and, most importantly, a chance to give a speech.

“It’s still a finish if you complete it in 100 hours, but you don’t have a chance to be on the microphone if you don’t finish in less than 75 hours,” Stone said.

“K-Stone needs to tell some jokes.”