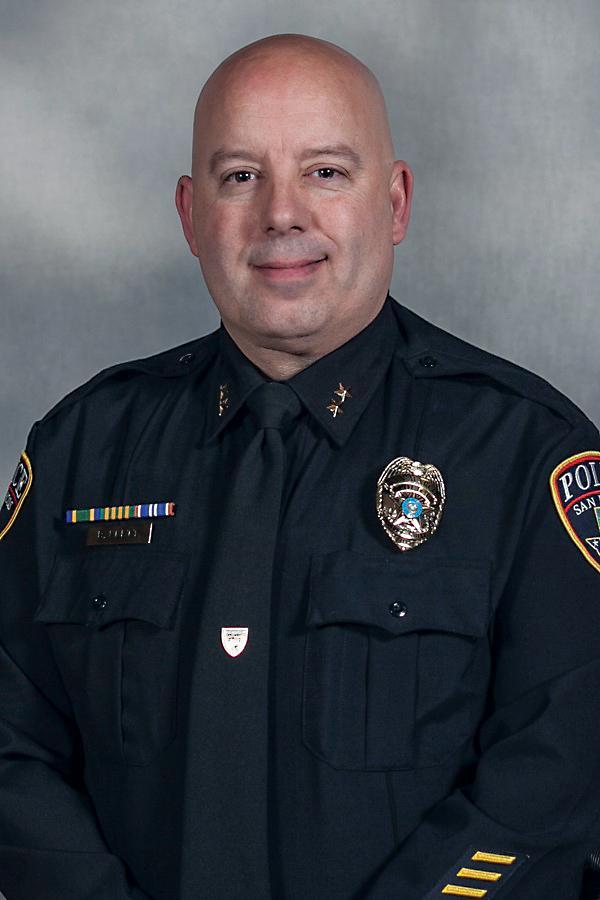 San Marcos has a new interim chief and head of the San Marcos Police Department.

The appointment follows a reorganization of the City Manager’s Office staffing, which promoted previous police chief Chase Stapp to Interim Director of Public Safety. Lumbreras noted that the appointment is not permanent, as the City Council will need to confirm a permanent police chief.

Klett, who has been with SMPD for over 29 years, served as a police officer with Texas State University before moving to SMPD.

“Chief Klett has been a dedicated member of our department and community,” Lumbreras said about his recommendation. “I have full confidence in Chief Klett’s strong leadership and I certainly believe that he’s going to serve our community well during this interim period.”

“The release of the statistics provided by the County in regards to the 72 black people with cite and release eligible offenses who were not offered a citation, but instead imprisoned is revealing of our local biases,” she said.

Mike Boone, the director of Child Nutrition for San Marcos Consolidated Independent School District, said he has encountered Klett at the high school hundreds of times.

“Bob’s a great man and I think that he should be the permanent chief of police…” Boone said. “He’s always smiling, great attitude, gets along with the kids, he is what we want as a police chief.”

When asked about the current direction of the police department, Klett said that SMPD sits on criminal justice committees at both the city and county level.

“I’m committed to taking those same steps forward,” Klett said. “I’ve been working in the background over these last couple of weeks on reiterating that message. Had that message again with my command staff today about going ahead with cite and release already in advance of any ordinances that might be coming in the future or future discussions.”

Klett noted that he does embrace changes, and mentioned that he will be speaking with his departmental supervisors on Thursday night “about some of the choices we make and how we focus on that.”

Klett then said that the state of Texas has had cite and release since 2007, but it has not come up as a concern until recently.

“Once these concerns came up, like we do with many other issues, mental health, other things across the city, we’re engaged in our community because we serve our community,” he said. “It’s our community that we adjust to. Our department is much different than any other department in the area because those departments are mirrors of their own community. So I do stand ready to take this department forward and working with our communities to do what’s best for all of our citizens.”

Mayor Pro Tem Lisa Prewitt, a member of the criminal justice reform committee, said that Klett has been at the committees’ meetings.

“I also want to say that no matter who the chief of police is, at the end of the day it’s this body of seven here that will be approving any ordinance for criminal justice reform, cite and diversion and L.E.A.D.,” Prewitt said. “And whoever is in charge of the police department will set policy according to what the city council adopts.”

“We’re still looking at L.E.A.D. as Hays County and the City of San Marcos so if that’s the best decision going forward, then I’m behind whatever’s best for all of our citizens,” Klett responded.

Councilmember Mark Rockeymoore told Klett that he is looking forward to working with him, and said he hopes to see Klett stand for the same principles as community members who have concerns about the police department moving forward.

“The community is getting browner, it’s getting blacker, there are more people coming here from more diverse locations,” Rockeymoore said. “And it's very important that we heighten equity to something that we do enterprise wide, something that I'm sure that you hold as a high goal for the county and for the city as well.”

Mayor Jane Hughson said Council wants to ensure that the community is fair and just to everyone and that everyone is treated in the right manner.

“I believe I can speak for all of us that we will work towards that if it’s not happening now; if it is then we’re going to keep doing it,” she said. “So whatever it takes to get to what is fair and just, that’s what we’ll do."