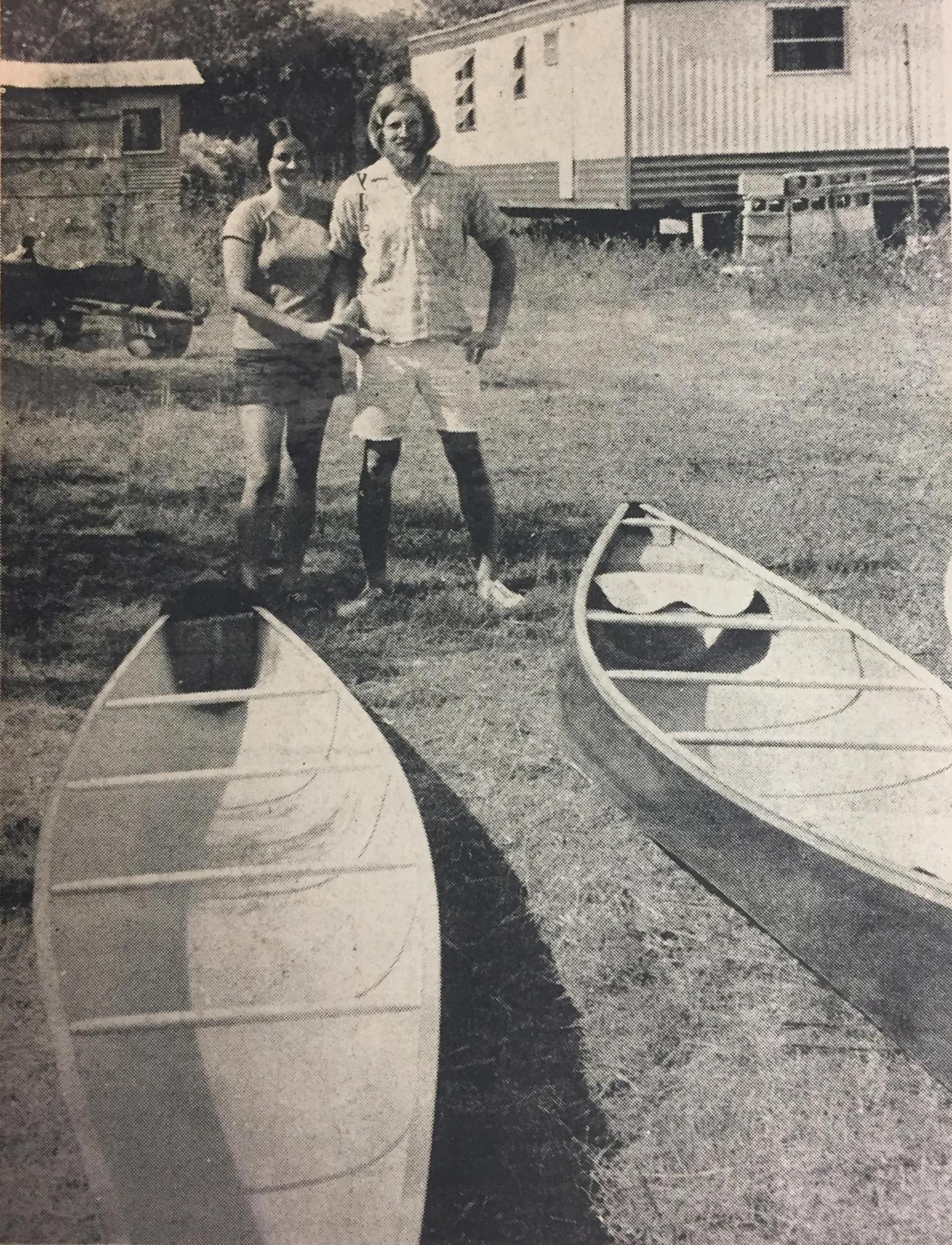 Tom and Paula Goynes opened their first canoe rental, Goynes Canoe Livery, in San Marcos in 1972. They have been active on the San Marcos River ever since. Daily Record file photos

Every year the Mermaid Society SMTX chooses two people to honor as the Mermaid Queen and the King of SPLASH — standing for Stewardship, Preservation, Local, Arts, Sustainability and Heritage. As the name implies, the people are generally selected for service to community, whether that be preservation of history, contribution to the arts, or in the case of this year’s king and queen, Tom and Paula Goynes, protection of the river.

Tom and Paula Goynes moved to San Marcos from Houston in 1972. According to Tom, it was the San Marcos River, specifically the Texas Water Safari that takes place every year on the river, that brought them here.

“I read about the first water safari in 1963, so I would have been 12 years old, and I thought I got to do this,” Tom said. “It was on the front page of the Houston Chronicle and a couple of Houston cops won that year. So it took me a few years, it was 1967 and I was 16 when my brother and a friend of ours and I got together and bought a canoe and started training.”

Tom was used to paddling on the creeks and bayou of Houston, and so when he saw the crystal-clear waters of the San Marcos River for his first time, well like any Houston boy, he was astonished.

“I couldn’t believe that you could put your paddle in the water and still see it. We were used to the bayou, where the water was black — it was horrible back in those days,” Tom said. “So to find a river that was this clean, I just fell in love.”

The Texas Water Safari is aptly dubbed “The World’s Toughest Canoe Race,” so during Tom’s first safari, they only made it to Luling. But he crossed the 260 miles to the finish line in Seadrift the next year — the first of what would be 22 Texas Water Safari finishes for Tom and eventually seven first places.

“I mean, if you really believe in a God, in a creator that made all of this,” Tom Goynes said, “well you can’t help but be an environmentalist.”

The Texas Water Safari, not only led to the Goyneses’ love of canoeing and the river, but it was the impetus for them meeting, according to Paula. Tom’s friend that participated with him on his first safari, Pat Oxsheer, was married to one of Paula’s coworkers at Dow Chemical Company in the data processing department.

“Barbara kept asking me to go to the river with her. She would sit on the bank all day while they (Tom and Pat) paddled and she was just really bored. I kept saying ‘no, no that does not sound like something I want to do,’” Paula said. “But I finally gave up and said ‘sure.”

“So it was love at first sight,” Tom said.

The Texas Water Safari ultimately led the Goyneses to move to San Marcos in 1972 and open up their own canoe rental, Goynes Canoe Livery, out of Pecan Park with 10 canoes they rented out of a little 20 by 50 foot shop, that also served as their home. Within a short amount of time they had grown their business to rent out about 100 canoes and were leading guided river trips.

The Goyneses recognized, from the moment they opened their river recreation business, the importance of accountability in taking care of the river. The first thing they did, according to Tom, was take out a half page ad in the Daily Record that said: “Attention landowners along the San Marcos River, we’re opening a canoe livery, and if there is ever a problem here’s our phone number,” with their phone number in the paper.

And people did call, and Tom would lead game wardens and police down the river by canoe to wherever illegal or nuisance activities were being reported. They also made all those that rented canoes from them sit through an orientation that talked about the importance of the river and keeping trash out of it — something they noticed the tubing outfitters that were also on the river weren’t doing with their renters.

That’s when pursuing nuisance rules for tubing outfitters on the San Marcos River became a project of the Goynses that eventually led them to sue several tubing outfitters, in a suit that ended up being settled in November of 2016.

The Goyneses left Pecan Park in 1979 and bought Shady Grove in Martindale. They had their only child Sandy in 1981. 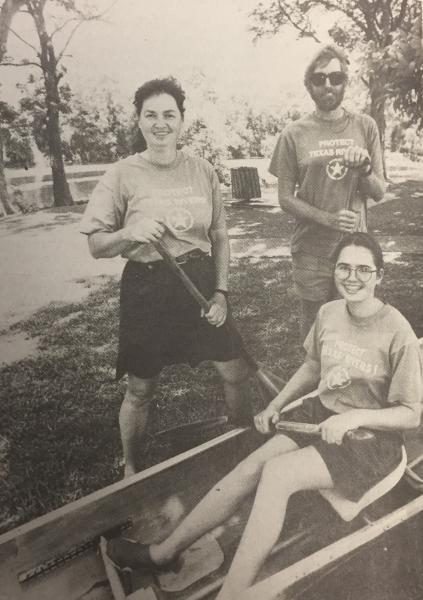 The Goynses competed as a family in 1996 in the Texas Water Safari. They finished all 260 miles of the race down the San Marcos River.

Running a canoe rental shop, managing a campground and raising a child, the Goyneses found themselves to be too busy, so they sold Shady Grove at the end of 1988.

Tom, around that time, started experiencing his first symptoms of Muscular Dystrophy — something his two other brothers had already been diagnosed with.

“I finished the safari and my right arm was numb,” Tom said. “I think I knew I had it by the time we sold Shady Grove.”

They decided to sell Shady Grove and they used the money to take a year off and raise Sandy. They bought a camper and traversed Washington state’s national parks.

During this time Tom also got the bug to go to seminary. He enrolled at Dallas Theological Seminary. He attended one semester and found his calling to open a wilderness retreat for people to get closer to God.

Tom, may no longer be able to paddle all 260 miles of the San Marcos River or go on long runs like he used to, because of the Muscular Dystrophy diagnosis. But the Goyneses have not slowed down in their involvement with the river. They were instrumental in starting the Texas River Protection Association (TRPA) — that Tom has been the president of since 1989 — and have orchestrated river cleanups across Texas.

And both as the Goyneses and the Texas River Protection Association, have used their influence to advocate for and protect the flow, water quality and natural beauty of rivers across Texas.

Together Tom and Paula Goynes have completed the Texas Water Safari three times — in 1996 they competed with their daughter, who has went on to compete in 10 safaris since and become the president of the Texas Canoe and Kayak Racing Association.

When asked about why the Goyneses have dedicated so many years of their life to appreciating, and protecting the San Marcos River, Tom said, for him it’s a faith thing.

“I mean, if you really believe in a God, in a creator that made all of this,” Tom said, “well you can’t help but be an environmentalists.”

The Goyneses will be honored as Mermaid Queen and King of SPLASH during the Mermaid Art Ball on Sept. 20 and the Aqua Faire on Sept. 21. For more information, go to Mermaid Society's website.