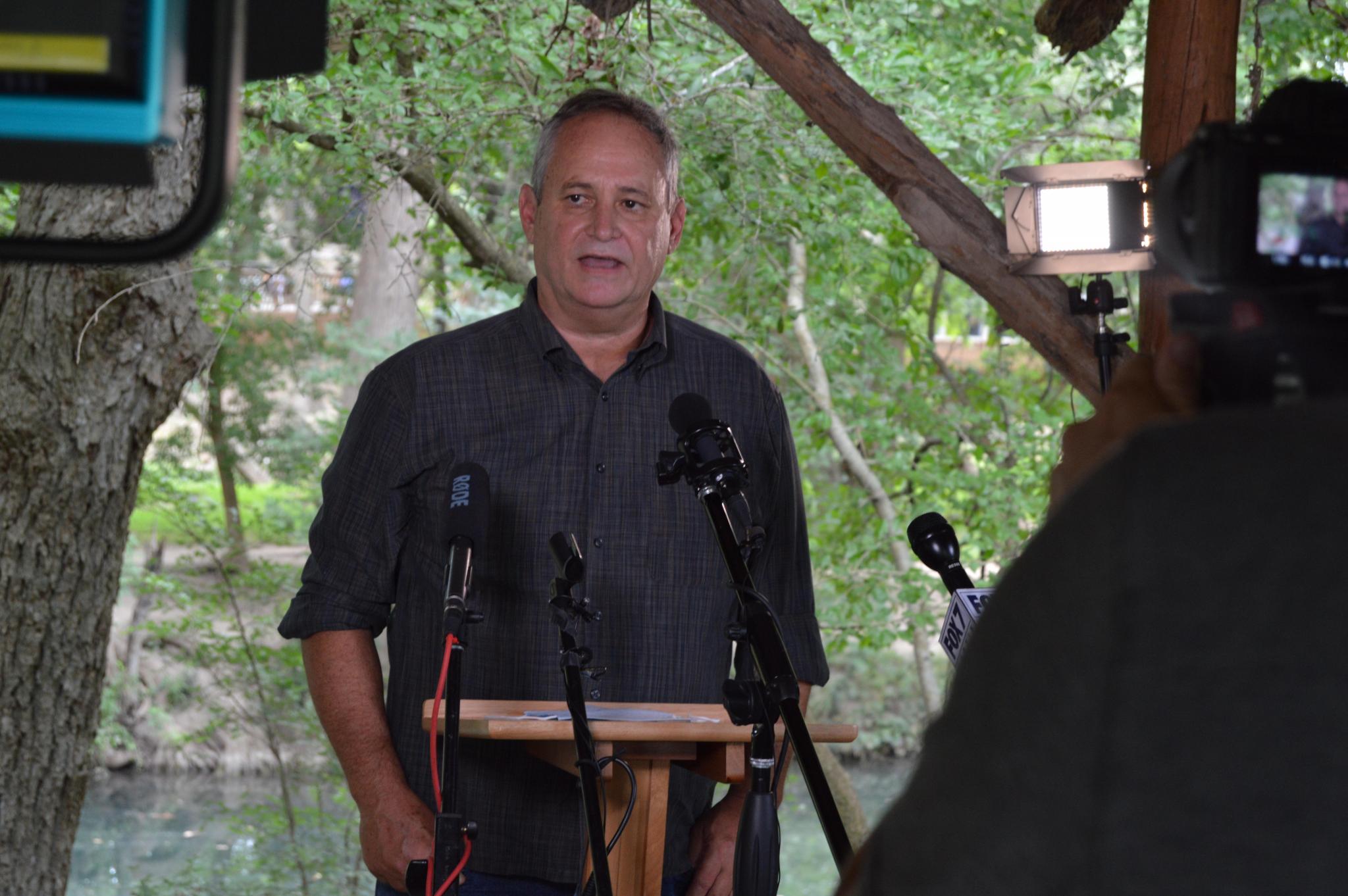 David Baker, executive director of the Wimberley Valley Watershed Association, said that his organization "will not back down" in the fight to stop the pipeline. Photo by Dalton Sweat

The Trinity Edwards Springs Protection Association (TESPA), acting on behalf of Blanco County landowners whose water was impacted in a spill of drilling fluid, has filed a lawsuit in federal court against the Permian Highway Pipeline and Kinder Morgan.

The case alleges violations of the federal Safe Drinking Water Act, which protects “underground sources of drinking water” by prohibiting the injection of “contaminants” into underground drinking water.

“That is exactly what occurred on March 28, 2020, when Kinder Morgan’s PHP constructors made serious error as they attempted to drill under the Blanco River and pumped 36,000 gallons of ‘AMC Gel’ drilling fluid into the aquifer,” a press release from TESPA said.

Kinder Morgan said that the lawsuit doesn’t have any merit.

“The claim that PHP has violated the Safe Drinking Water Act is unfounded and without merit,” Kinder Morgan said in a statement. “The same metals in question naturally exist in the very earth that this groundwater is flowing through, and they are naturally present there at levels that are orders of magnitude higher than the concentrations present in the drilling mud used at the Blanco River site.”

Property owner Teri Albright said that her drinking water was normally “bountiful” and “pristine.” Then, in late March, that changed suddenly as the water came out looking like mud.

“We didn’t know why that was going on,” Albright said. “It had never happened in the years we had been there. I went around the house and checked all the other faucets, and we had the same stuff coming out of every faucet. We are on a well and that is our sole source of water to our property… For this to happen it was extremely alarming.”

Albright said that the company did not notify anyone of the spilled fluid “until our Facebook pictures got out” and that her water is still undrinkable now 75 days after the incident occurred.

“For Kinder Morgan to have been negligent enough to pump through into a karst feature and to keep pumping mud even after they realized they were not getting return and to not tell us about it, they violated our livelihood, our lifestyle, our home, our value of our property,” Albright said. “…It is like they came onto our property and set a match to our house. It is a criminal violation of our property and our rights as homeowners along the Blanco River.”

The drinking water was tested by the Lower Colorado River Authority, according to Jeff Mundy, an attorney for TESPA. He said that there were seven carcinogens found including arsenic.

“It is called AMC gel drilling fluid mix,” Mundy said. “The manufacturer says this material is a human carcinogen. Why is Kinder Morgan telling the community this stuff is not hazardous? The manufacturer says it is a carcinogen. The International Agency for Research on Cancer, the premier cancer research organization in the entire world, has said there is no safe level for exposure to human carcinogens. None.”

TESPA said that the testing showed two additives, Acrylamide and Silica, which are recognized as human carcinogens. It also said that subsequent testing of the AMC gel mix “found it to contain several metals such as Aluminum, Arsenic, Barium, Chromium, Led, Manganese and other metals, five of which are Class 1 human carcinogens.”

Kinder Morgan said that the metals found in the drinking water do not exceed the Safe Water Drinking Act.

“As with any muddy mixture of earthen material and water, we can all agree that undiluted drilling mud isn’t drinking water,” Kinder Morgan said in a statement. “However, under this group’s own experiment, once the drilling mud was diluted to the Total Suspended Solid (TSS) levels detected in the Albright well on its cloudiest day, there was no exceedance of the Safe Drinking Water Act. It is also important to note that AMC Gel, commonly referred to as Bentonite, is certified safe and appropriate by the international standards authority NSF International for use in drilling water wells.”

Mundy stated that the lawsuit has many facets including requesting the $57,317 per day fine for contaminating drinking water. While the property owners are asking for financial relief for their loss in property value, this fine would be paid to the federal government. Among the other requests in the lawsuit, TESPA is asking the courts to force Kinder Morgan to clean up the spill and ban them from using this type of drilling fluid in the general area.

Construction continues throughout the 430-mile pipeline project, but it is on hold at areas where it is crossing the Blanco River.

“Drilling activities at the (Horizontal Directional Drilling) site of the Blanco River remain suspended as we evaluate alternative measures for crossing the river,” Kinder Morgan said. “Other construction activities on the pipeline and compressor stations are continuing as planned and we are over 65 percent mechanically complete on the entire project. We have been in close contact with concerned landowners to address their needs, offering food, clean water and other accommodations.”

David Baker, executive director of the Wimberley Valley Watershed Association, said that his organizations fight against the pipeline will continue.

“We can not risk it. We cannot take all the risk and let Kinder Morgan take all the profit,” Baker said. “…Our region is at stake. We are not going to back down.”