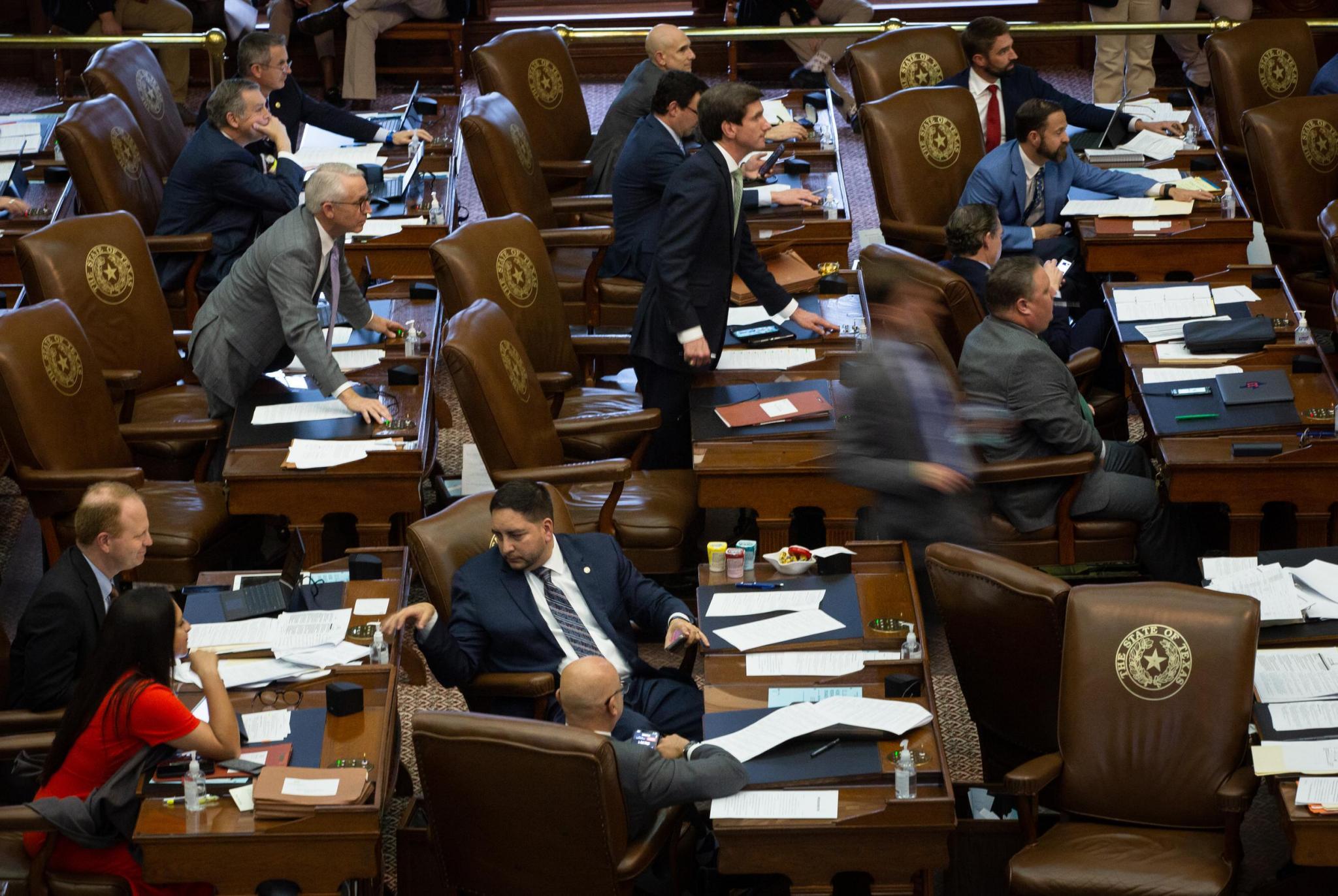 Fresh off the defeat of two of his legislative priorities Sunday night when Democrats abandoned the Texas House to block a sweeping elections bill, Gov. Greg Abbott flexed his executive muscle Monday — vowing to defund a co-equal branch of government while raising questions about the separation of powers in Texas.

“I will veto Article 10 of the budget passed by the legislature,” he wrote on Twitter. “Article 10 funds the legislative branch. No pay for those who abandon their responsibilities.”

Abbott did not give additional details about how the veto would work, telling his nearly 600,000 Twitter followers only to “stay tuned.” He’s also said that lawmakers will be brought back for a special legislative session this year to pass the failed priority bills. But the veto announcement on social media sparked concerns about the increasing encroachment by the state’s executive branch into the legislative branch’s purview.

“We have not seen a governor in modern times who has taken such a step to minimize the legislative branch of government,” said Brandon Rottinghaus, a political scientist at the University of Houston. “The Texas Constitution sets out a balance of power, and it has stuck to that since the inception of the Texas government. To change that by altering which branch was able to be politically and financially stronger is clearly antithetical to the Constitution.”

A governor targeting the Legislature’s budget would be unprecedented in Texas history, according to the Legislative Reference Library of Texas. But in 1971, Gov. Preston Smith vetoed all appropriations made for the second year of the 1972-73 biennial budget and tasked the Legislature with redoing the budget for that year during an already planned special session.

“This probably ventures into uncharted territory,” said Dale Craymer, president of the Texas Taxpayers and Research Association, who worked on the budget for Govs. Ann Richards and George W. Bush. “It invites some fascinating academic questions.”

Several of these agencies would be crucial for the all-important redrawing of political maps that lawmakers are expected to take up in an already planned special session in the fall.

Lawmakers on both sides of the aisle are worried about Abbott’s veto impacting workers in those agencies and other staffers.

House Speaker Dade Phelan, a Beaumont Republican, said he shared the governor’s frustration that two GOP priority bills on elections and bail had not gotten the Legislature’s approval.

The elections bill followed a nationwide push for so-called “election integrity” in state legislatures, after claims by former President Donald Trump that there was voter fraud in the 2020 presidential elections. Texas’ bill would have restricted voting hours during early voting, curtailed local voting options and further limited the ability of Texans to vote by mail.

Abbott pushed to change the bail system in Texas after Damon Allen, a trooper with the Department of Public Safety, was killed during a traffic stop while the suspect was out on bond. Abbott asked the Legislature to make it harder for violent criminals to receive bail.

But Phelan said a veto of the entire Legislature’s budget would hurt the wrong people while lawmakers, whose $600-per-month pay is written into the Constitution, would still get their paychecks.

“My concern is how it impacts staff, especially those who live here in Austin, which is not an inexpensive place to live and raise your family and children,” said Phelan, a former legislative staffer. “And the agencies it impacts — Sunset, Legislative Reference Library, Lege Council — I’m just concerned how it impacts them because they weren’t the ones who decided that we were gonna break quorum, it wasn’t their decision, right?”

Rep. Donna Howard, an Austin Democrat who was among those who walked out of the House to break its quorum Sunday night, echoed Phelan’s concern for government employees and criticized Abbott for announcing the veto without explaining how it would work.

“They had nothing to do with it. They are hired to do a job. They do it well. They show up and they work long hours during session,” she said. “To put them in the position of being concerned whether their jobs will be continued is extremely irresponsible.”

Howard also criticized the move as an attempt to inhibit the Legislature’s ability to perform its duties by a governor who was angry for political reasons.

“We have a balance of powers for a reason,” Howard said. “If you do not have the branch that represents directly the people of this state, then you are in essence having something very similar to a monarchy, with one person in charge of everything that happens in the state with no input from elected representatives.”

But Abbott has support for his proposed veto from Lt. Gov. Dan Patrick, who presides over the Senate. Patrick, who has been vocal about his frustration with House leadership over the walkout, said putting staff jobs on the line was an effective way to ensure Democratic lawmakers show up for the special session.

“If the Democrats don’t come back, they’ll have to fire everybody,” Patrick told Dallas radio host Mark Davis. “That will force them to come back, and while they’re back, we’ll pass those other bills.”

If carried through, the veto would continue an expansion of the executive branch’s authority over the last two decades. During the pandemic, Abbott exerted broad authority to respond to COVID-19 under the Texas Disaster Act of 1975, issuing executive orders that limited social gatherings to 10 people, closed down restaurants and bars, and closed down nursing homes to visitors.

Some lawmakers flinched at his use of that law, which was meant for natural disasters like hurricanes with a clear end date, to exert executive power during an ongoing pandemic.

The conservative House Freedom Caucus called on him to stop the “government overreach,” and lawmakers tried unsuccessfully this session to curb the governor’s executive authority during natural disasters.

Abbott has also expanded the governor’s power in the realm of budget vetoes.

In 2015, the Legislative Budget Board argued that a governor went too far when he used his line-item veto to scratch items in the state budget that were not directly tied to appropriations.

But Attorney General Ken Paxton’s office sided with Abbott and said the governor was within his authority to do so, which critics said gave governors the ability to veto the directions and intentions of lawmakers on top of actual appropriations.

Rottinghaus, who is working on a book about former Gov. Rick Perry, said the growth of the executive branch’s power is one of the themes of the book, but “Abbott has taken it to the next level.”

“Perry made the tune popular, but Abbott took it to No. 1 with a new band,” he said.

Perry could serve in some ways as a cautionary tale for Abbott. In 2007, Perry signed an executive order mandating that all sixth grade girls get vaccinated for the human papillomavirus, which can cause cervical cancer. But lawmakers came back during that legislative session and blocked his executive order, saying Perry had overstepped his authority.

“He backed off immediately. He saw he’d gone too far,” Rottinghaus said. “That’s a battle that the governor doesn’t want to pick because the courts could say he’s wrong, the Legislature could defund the executive branch in the same way — there’s all kinds of options that the Legislature can use. ... That’s what Perry found. If you cross the Legislature, you’re risking a revolt you can’t contain.”

Not everyone believes the governor will follow through, however.

Abbott has until June 20 to announce his vetoes. The current biennial budget ends Aug. 31. If Abbott called back lawmakers before the end of August and got his priority bills passed, he could then let lawmakers restore the funding for the new budget starting in September without any impact to people employed by the legislative branch.

“Abbott likes to puff up and then deflates very quickly,” said Matt Angle, a Democratic political operative who runs the Lone Star Project. “He doesn’t have the guts to send termination notices to public servants who are just doing their jobs.”

On Thursday, Abbott told Lubbock radio host Chad Hasty he would call lawmakers back for two special sessions. The previously planned fall special session would be in September or October and deal with redistricting and the allocation of $16 billion in federal COVID-19 funds. But before that, Abbott said, he’d call legislators back to work on the defeated elections and bail bills.

Rep. Lyle Larson, R-San Antonio, said he was doubtful the veto would come to pass and said it would reflect poorly on Abbott if it did. Staffers for Republican lawmakers who played no role in the Democratic walkout would also be harmed.

Governors in other states have tried the maneuver before. In 2017, New Mexico Gov. Susana Martinez, a Republican, used a line-item veto to cut the Legislature’s funding when she disagreed with the Democratic majority in the statehouse over its budget.

The Legislature sued Martinez, but the state’s Supreme Court declined to hear the lawsuit. Martinez later called a special session during which funding for the Legislature was restored.

That same year, Minnesota Gov. Mark Dayton, a Democrat, vetoed funding for his state’s Legislature. That state’s Supreme Court also held up the governor’s veto, explaining in a 5-1 decision that Minnesota’s constitution did not bar the governor from vetoing funding for another branch of government.

Two states, Hawaii and Michigan, have constitutional statutes that bar governors from vetoing or reducing legislative or judicial appropriations, according to the National Conference of State Legislatures. Texas does not.

Cassandra Pollock and Patrick Svitek contributed to this report.

Disclosure: The National Conference of State Legislatures, the Texas Taxpayers and Research Association, and the University of Houston have been financial supporters of The Texas Tribune, a nonprofit, nonpartisan news organization that is funded in part by donations from members, foundations and corporate sponsors. Financial supporters play no role in the Tribune's journalism. Find a complete list of them here.

This article originally appeared in The Texas Tribune at https://www.texastribune.org/2021/06/03/texas-greg-abbott-veto-article-x/.