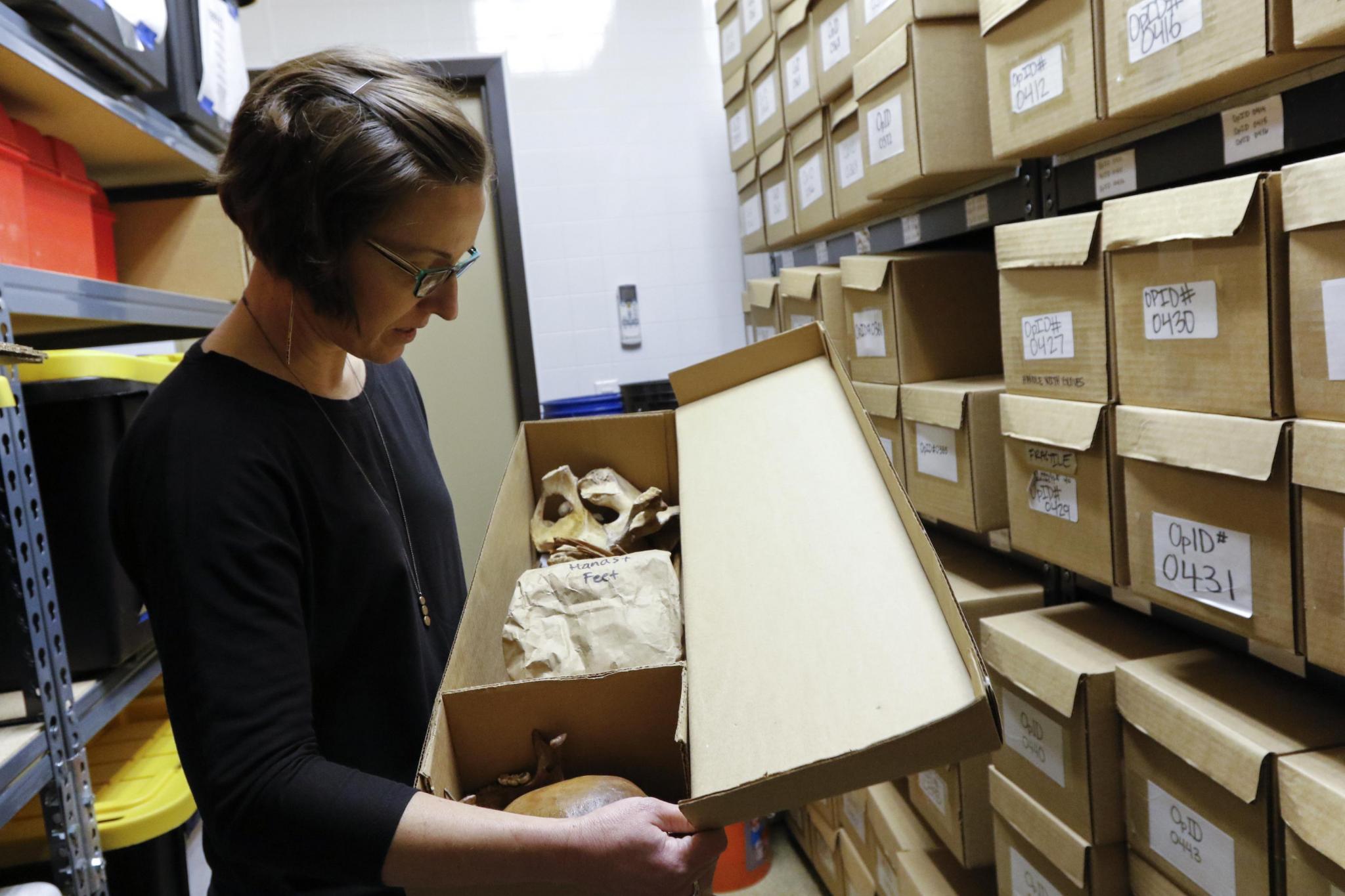 Dr. Kate Spradley examines a set of remains from an individual who died after crossing the U.S.-Mexico border at Operation Identification’s research facility at Texas State University. Operation Identification is a service project, founded by Spradley, that aims to identify the human remains of those who died crossing the border in certain Texas counties and return them to their families. Daily Record photo by Denise Cathey

In the storage room in Texas State University’s Osteology Research and Processing Laboratory, forensic anthropologist Dr. Kate Spradley takes down one of the cardboard boxes that fill the room’s shelving units — nearly 200 boxes in all. Inside the box are a skull, several large bones and a brown bag labeled “hands and feet” in black marker. The remains, as with all of the boxes, belonged to a migrant who died after crossing the border into Texas.

The remains got to Spradley’s facility as part of Operation Identification, a service-learning project founded by Spradley in 2013 that seeks to restore identities to the remains of migrants recovered from the Rio Grande Valley region. Her project is one of many in the Forensic Border Coalition, a group of nongovernmental agencies, that works to address barriers to the identification of migrant remains.

When Spradley came to teach at Texas State University a decade ago, she had no idea what happened to the migrants who died in Texas. In 2012 it seemed to her that news reports were filled with stories of record-high numbers of deaths in Texas of Central Americans fleeing violence, but little information was available about how authorities were handling the bodies.

Partnering with a colleague at Baylor University, Spradley and some students took a trip to Sacred Heart Cemetery in Falfurrias, to perform exhumations in 2017. The cemetery was seen as a good starting point as it serves as a burial place for both paupers and unidentified migrants for Brooks County.

According to Border Patrol, counties like Brooks which encompass the Rio Grande Valley Sector have experienced a surge in the number of migrants passing through over the last decade.

“We are averaging about 1,000 people a day,” Border Patrol Agent Intelligence Thomas Kimbriel said. According to Kimbriel, the sector is popular because “this is the closest entry point to South America for them to enter into the United States.”

As the number of migrant casualties rose after 2012 for Brooks County, Spradley observed that their ability to properly handle the remains decreased.

“You can see the difference in the cemetery from when they just had a few migrants to when they had a lot. They were much more intentionally placed in their burials with more, I guess, care and thoughtfulness,” Spradley said. In later years “...when they’ve gone from 30 to 60 to 120 deaths for the county — you can see that it’s a crisis for them.”

Paupers were buried in cardboard boxes or body bags with clothes, sometimes crossed arms and a Bible or other personal effects.

“The migrants typically there’s no care taken for their placement. They could just be thrown in and they’d have some personal effects shoved in there too,” Spradley said.

This treatment wasn’t unique to Brooks County. In Cameron and Starr counties the same pattern repeated. 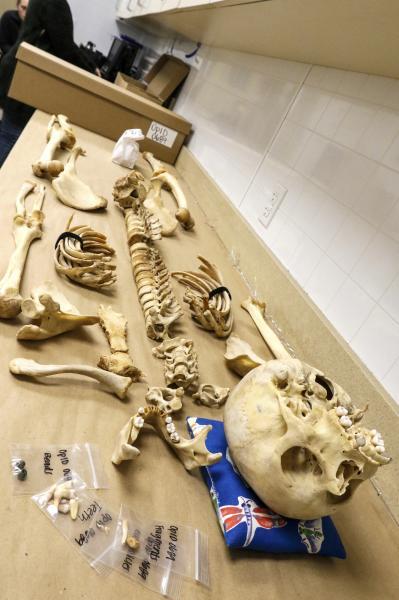 One individual is laid out on a table for skeletal analysis as the team compiles their report.

According to Operation Identification’s website, the Texas Law of Criminal procedure requires autopsies, DNA samples and analysis for cases like these. However, as counties became overwhelmed with remains, whether that happened before burial depended on whether a county had the funding — they often didn’t at the time.

Spradley remembers that in Cameron County, which had a forensic pathologist, remains could be sent for autopsy and have a DNA sample taken. However, the remains were often buried in unmarked areas. If a match was found, the body would have to be located by memory — if anyone could. “In most cases, the end result is the same, you can’t make an identification,” Spradley said.

So Spradley and her team of Texas State University students and volunteers stepped in to fill the gap. Once or twice a year Spradley assembles a team and goes out to perform exhumations in cemeteries that are likely to house the remains in need of identification.

For her students, Spradley sees this as an opportunity for them and the community at large. “They get hands-on experience in human rights work and helping with a humanitarian crisis ...This is experience students can’t get anywhere else in this country at an institution like this.”

From there the group’s partnerships through the Forensic Border Coalition steps in to help connect their findings with missing person reports filed by the victims’ families and getting a DNA sample from relatives once a likely match is found.

One coalition member, the Colibri Center for Human Rights, collects missing person reports from families that can be compared with anthropological reports for positive identification.

“If they are lucky they will find their loved ones,” said Mirza Monterroso, the Missing Migrant DNA Project and DNA program manager.

“We have been told from families that they feel, after the news and everything hits them, that some feel lucky because they have found their loved one and they know that there are many others that are still looking,“ Monterroso said.

Once the organizations think there might be a match, a DNA sample from both parties must be compared to prove genetic association. While DNA  isn’t 100 percent accurate to positively identify someone, it often can help the team narrow down who an individual might be.

Sometimes, it is the belongings that people carried with them rather than DNA that offer the team, and the families of missing people, a chance at identification and homecoming.

“We had a woman last year, she lived in Texas, and her parents brought her and her brother over when she was young. She saw a pair of tennis shoes and she said, ‘those look like the ones that I bought for my brother before he crossed,'” Spradley said. “She sent us a picture of him living — and normally the pictures of them living don’t help at all — but he was wearing those shoes.” 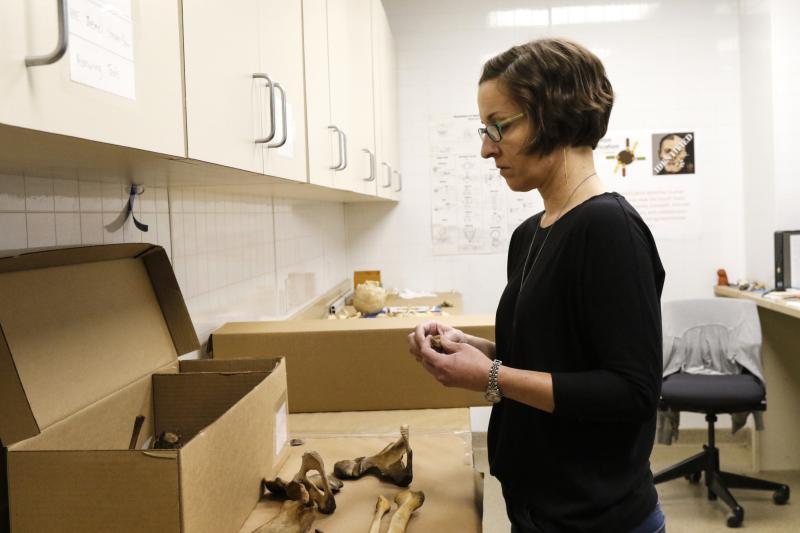 Dr. Kate Spradley holds up a broken clavicle from an individual undergoing skeletal analysis that had started to heal before they died.

For Spradley, identifications like these are a bittersweet ending. “I really think that giving them the chance at identification gives them dignity,” Spradley said.

“When they do get identified it helps the family the most, it helps them. It is not the outcome they were looking for, but they don’t have to live with that trauma every day of not knowing what happened and there is something they need to be doing.”

However, for most of the missing, it is unlikely that answers will ever be found. Individuals at Operation Identification’s labs represent only those whose bodies were fortunate enough to have been found in accessible areas of the Rio Grande Valley.

“Most of them are just accidental discoveries. If they aren’t accidentally discovered they just aren’t going to be found, because we can’t generate efforts to go search for them without permission,” Spradley said.

It is often how long before an individual was found that determines the outcome. The longer remains are out in the elements, the fewer chances Spradley and her team have to make an identification. “Some of the skeletal remains we have that are really weathered they don’t yield any DNA on the first sample we send off. Sometimes we will get one more sample and the lab will tell us ‘Okay you have one more try.’”

Despite all the team’s efforts, Spradley knows there are some individuals who will never be identified. “It’s very sad,” she said.