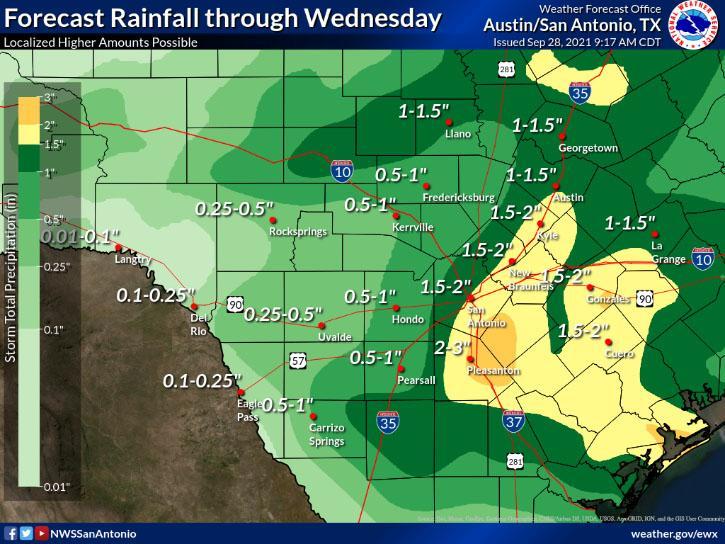 It’s time for San Marcans to break out their umbrellas and rain boots. Fall has arrived and so has the potential for strong storms in South-Central Texas beginning this week.

As of Tuesday, San Marcos and the surrounding areas went into active and unsettled weather patterns that are expected to go into at least the first half of the weekend, according to the National Weather Service.

“For tonight and tomorrow morning we're expecting some areas that pick up one to three inches of rain,”  said Matthew Brady, a meteorologist with the U.S. National Weather Service Austin-San Antonio Texas. “Then for the next five days, some areas receive three to five inches and locally higher amounts.”

The patterns are the result of a combination of gulf moisture across the area and two upper-level storm systems driving the weather from the desert southwest.

With heavier rainfall expectations, residents should practice and consider safety precautions while traveling or on the road.

“Flooding concerns could increase by the end of the week,” Brady said. “If anyone does come across any flooded roadways, for motorists, turn around, don’t drown.”

According to the NWS, there is a potential for elevated weather hazards in South-Central Texas. By Sunday, there is an expectation of minimal impacts.

“I can't rule out the potential for maybe some locally damaging wind gusts, perhaps a little bit of hail that could get to about a quarter-inch in size,” Brady said.

Tuesday morning saw much fog over the eastern areas of San Marcos. According to Brady, that was the best time for reduced visibility due to fog. However, visibility can still be affected by local heavy rainfall.

“Our biggest timeframe for concern for locally heavy rainfall is (Tuesday night) into (Wednesday) morning and also Thursday through Friday,” Brady said.