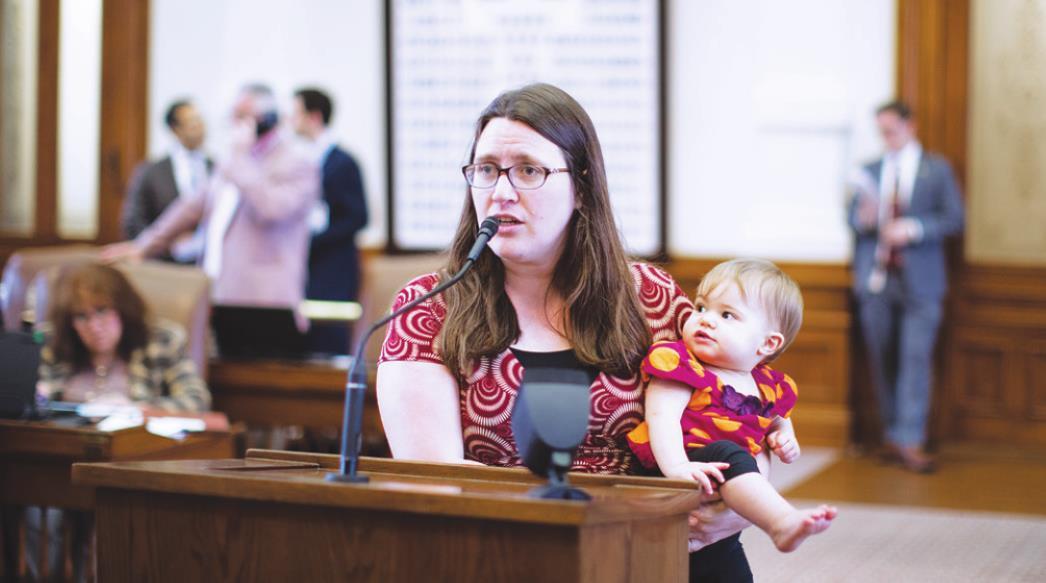 Zwiener: 'We need to raise the bar for everyone'

Texas Rep. Erin Zwiener, who won reelection to represent House District 45 in November, has always been somewhat interested in running for office, having grown up at a time in Texas when women ruled.

Ann Richards was Governor, Madeline Albright was Secretary of State and Kay Bailey Hutchinson was representing Texas in the Senate.

“What I didn't know was that I was the first generation of girls to see that,” Zwiener told the Daily Record in an interview. “I grew up in the girl power era. Then you grow up and encounter a bunch of men who haven’t gotten the memo. So many of our gains are very recent. We are nowhere near equal representation.”

After a surge in female representation in the 1990s, elected bodies were made of 18-19% women; those numbers haven’t climbed much since then, Zwiener said.

There are currently 38 female members of the Texas House of Representatives, just 25% of all members and the highest number ever for women in the house.

“We deserve better,” Zwiener said. “We deserve at least 50%. I’m glad there are one or two women in high office, we need more. Having our first woman vice president is a major step, I hope we keep taking that step.”

To partly explain the rise in women running for office, Zwiener points to a shift in gender norms; historically women didn’t run for office until they were done raising families, she said.

In fact, the race for District 45 was between two mothers: Zwiener and her opponent Carrie Isaac.

Her other partial explanation for the rise in female candidates is the support women have from all directions. Role models paving the way before them and support from family members at home allowing them to step outside the home.

When Zwiener realized no Democrats ran for District 45 in 2014 or 2016, she approached Hays County’s first female commissioner hoping to convince her to run for the office and to let her help. Instead, Commissioner Debbie Ingalsbe opted to empower another young woman.

“Debbie took a meeting with me, a complete no one, and the conversation ended with her telling me she thought I would be a good candidate,” she said.

Learning she was pregnant just one year before the election didn’t stop Zwiener from running. She wanted to have a family and she wanted to have a Democrat representing her. Zwiener's “utter frustration” that no one else had done it pushed her past the conventional boundaries that women couldn't do both; that, and her partner who does his fair share and then some during campaign season.

“There are real time constraints with having a family ... Women partners have been making it work for their male partners for generations,” Zwiener said. “Nobody ever asked Beto O’Rourke how he would be a senator with three young kids at home.

“I got that question the first time I ran,” she continued. “It broke my heart when a young woman asked me that. I want them to believe more is possible.”

Having a supportive family nearby and living close to Austin also helped Zwiener to be a politician and a mom.

She shared that being a legislator was in some ways made it easier to be a working mom than other jobs in that she could bring her child to the office if she needed.

Having a family grounded Zwiener in unexpected ways and made her a stronger politician. “Politics is such a strange world,” she said. “There were literally millions of dollars of attack ads against me ... Coming home and having to deal with the day-to-day needs of a toddler is a very good way to get grounded in what matters. I am very grateful throughout this experience and the tough moments I have had these moments of baby and toddler joy, to help me focus on what matters.” Zwiener uses female traits that have been historically seen as a weakness to her advantage.

“One of the differences I see commonly between men and women who seek office is that women engage more directly with criticism,” Zwiener said. “I think women tend to listen to criticism and see if there is grounding for it and if there is something that needs to be improved.”

Zwiener has observed that women get punished for not having their egos in check while Men are rewarded for being the biggest ego in the room. Instead of feeding her ego and writing off criticism, Zwiener opts to engage with and sort through the criticism to find the value and the need her constituents are expressing.

“There is a saying that says you have to train a mule the way you train a horse because mules are less forgiving. Similarly, people say women have to campaign the way men do,” with that statement Zwiener disagrees. “It is better to be the candidate and elected official who is conscientious of others, and doesn't let their ego get out of control. Instead of lowering the bar for women, to me, we need to raise it for everyone.”

Zwiener says she wouldn’t know how not to keep women in mind as she writes legislation and votes on policies, especially given the many issues that disproportionately affect women.

She mentioned her work on creating a due process for sexual harassment in small workplaces and creating tools for prosecutors and investigators to prosecute sexual assault cases.

Zwiener is also working on helping women recover from the pandemic. “A lot of women are leaving their work because they couldn't figure out how to do childcare and their jobs,” she said. “We still have a pandemic going on that's getting worse right now.”

Why is it important for women to run for office?

“It’s critical for us to run for office because we are half the conversation,” Zwiener said. “If we are not at the table people who don’t know us and our needs will make all the decisions. They will make those decisions badly, because we don't have a representative body making the call. This is not a gender specific moment or age specific moment. Women, young women, bring knowledge to the table. I want women and girls to know their voices are valuable. We will make worse decisions without you getting involved. Join us and help us make better decisions.”