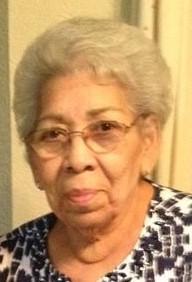 Guadalupe C. Garza, age 82, passed away peacefully on June 17, 2018 at her home surrounded by her loving family. Affectionately known as Lupe, she was born on Nov. 21, 1935 in Staples, Texas to Julian and Francisca Cruz.

Lupe was a devout Catholic and was a member of St. John the Evangelist Catholic Church. She was an avid bowler, enjoyed playing bingo, and she loved the Dallas Cowboys.

In 1958, she married the love of her life, Silverio Garza. They would have celebrated their 60th wedding anniversary later this year. Together they raised three children, Mario, Elvira, and Carlos.

Lupe was preceded in death by her parents and her brothers, Jose Cruz, Gabriel Cruz, and Agapito Cruz. She is survived by her sister, Felicita Moreno and her brother, Gilbert Cruz. She is also survived by her husband Silverio Garza, son Mario Garza (Lisa), daughter Elvira Loredo (Chris), and son Carlos Garza (Melinda), and grandchildren Sonya Gutierrez (Joseph), Roberto Carlos Loredo, Michael Moncada, and Adrianna Cordova (Manny). Lupe is also survived by seven great grandchildren and numerous nieces and nephews.

Services will include visitation from 3-9 p.m. on Thursday, June 21, 2018 at Thomason Funeral Home, with recitation of the Holy Rosary at 7 p.m. Mass of Christian Burial will be on Friday, June 22, 2018 at 10 a.m. at St John the Evangelist Catholic Church with interment at Memory Lawn Memorial Park in Martindale, Texas.

The family would like to express their sincere appreciation to all of their family and friends for all of the love and support they have received.