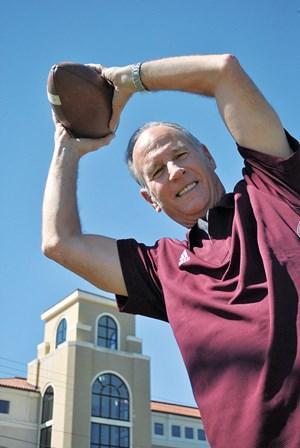 John Robert “Johnny” Parker, Sr., age 70, passed away peacefully on September 9, 2020 in San Marcos, Texas. He was born on December 20, 1949, in Pasadena, Texas, to C.A. “Johnny” and Alice Parker. Johnny was the second of four children and a 1968 graduate of Sam Rayburn High School in Pasadena.

In 1969, Johnny transferred on a football scholarship from New Mexico State University to Southwest Texas State University. He started playing wide receiver there and made history through 1971. Many receiving records were set and some still hold today. In 2016, he was selected by the “T” Association to the Athletic Distinguished Alumni Hall of Honor at Texas State University. During that year, Johnny was also selected to the Pasadena ISD Athletic Hall of Fame for football and basketball.

He went to work at the Gary Job Corps Center, San Marcos, in 1971, working in the PE and Recreation Department. He was proud of building the Explorer Scout program. Johnny married Tammie Lyman Parker in 1985. After leaving Gary in 1986, he began his career at Texas State University in the Police Department as Sergeant in the Parking Services division. Johnny retired from the university in 2016 with 29 years of service.

A memorial service will be held at Pennington Funeral Home, 323 North Comanche Street, San Marcos, on Thursday, September 17, from 5 to 6 p.m. Family visitation will begin at 4 p.m.