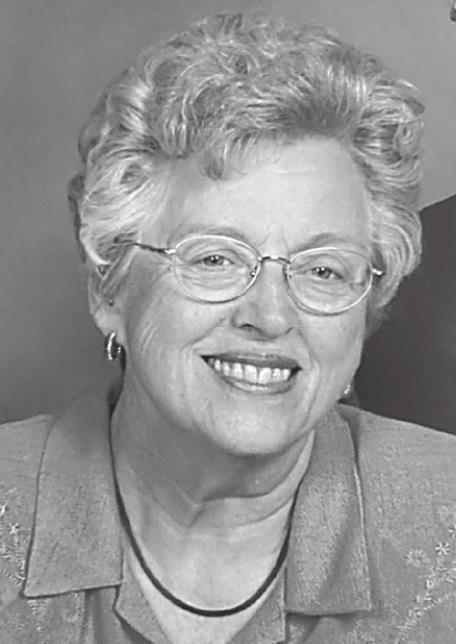 Patricia “Patty” Thompson Meyers of Wimberley, Texas, passed away at her home surrounded by her loving family at 8:15 p.m. on August 29, 2021, at the age of 90. A funeral mass will be said at St. Mary Catholic Church in Wimberley, Texas, at 11 a.m. on Saturday, October 16, 2021, and is available for all family and friends. A funeral luncheon will follow in the St. Mary Parish Activity building.

Patty was born in Atlantic, Iowa, on January 28, 1931, to Richard and Leona (Mailander) Thompson. Living all of her childhood in Atlantic, Iowa, she was successful in academics, school activities, and enjoyed being a “big sister” to her siblings, MaryAnn, and “Willie” Thompson. After graduating from Atlantic High School in 1948, she attended Creighton University (Omaha, Nebraska), earned her Bachelor of Science in Nursing in 1952, and began her nursing career at St. Joseph’s Hospital.

After returning to Atlantic for a Mother’s Day visit in 1953, Patty was reintroduced to Gaylord “Whitey” Meyers in a jewelry store where his brother (Larry) worked. On May 29, 1954, she married the love of her life, “Whitey”, at her childhood church (St. Peter and Paul Catholic Church) in Atlantic, Iowa.

After a honeymoon visit to her Uncle Tommy and Aunt Betty Thompson’s home in Corpus Christi, they decided to move to Texas in late 1954. They settled in Austin, and had the first of their eight children in February of 1955. Although they were active in the church and made several life-long friends, in the summer of 1955, they decided they wanted to be closer to family, and moved to Corpus Christi. In Corpus Christi, they grew their family, and Patty worked first as a nurse at Spohn Hospital, and then for a family medical practice. They were active members of Christ the King Catholic Church and the Holy Family Guild.

In 1966, Patty and Whitey purchased their home in Portland, Texas, became active members of Our Lady of Mt. Carmel Catholic Church, and Patty eventually became the school nurse at Gregory-Portland High School.

After her diagnosis of multiple sclerosis in 1971, Patty took a medical retirement in 1972 from public schools which allowed her to continue to work half days as the Gregory-Portland High School Nurse until 1986. While waiting on Whitey to retire, she continued as a home health nurse.

In 1987, Patty fully retired with Whitey and moved to Wimberley. In Wimberley, she was an active member of St. Mary’s church (Altar Guild, Ladies Guild and Scripture Share, the Choir, and the Building Committee). She enjoyed volunteering her time at the Deer Creek Nursing Home, and the local Village Store. They both enjoyed traveling to see friends and family throughout the continental United States, Canada, and several overseas countries. Starting with a cruise to Alaska (for their 40th anniversary), they enjoyed several cruises, and Patty used their timeshare vacation opportunities to plan vacation trips and activities for Whitey, their kids, and grandkids. They spent many happy hours driving to see their children and grandchildren compete or perform in many activities throughout Texas, and to attend their graduations. She was known for being a loving and faithful daughter, sibling, cousin, friend, mother, and MawMaw.

In lieu of flowers, donations may be made to the St. Mary Catholic Church (Wimberley), EmilyAnn Theater and Gardens, the MS Society, and/or Susan G. Komen foundation.