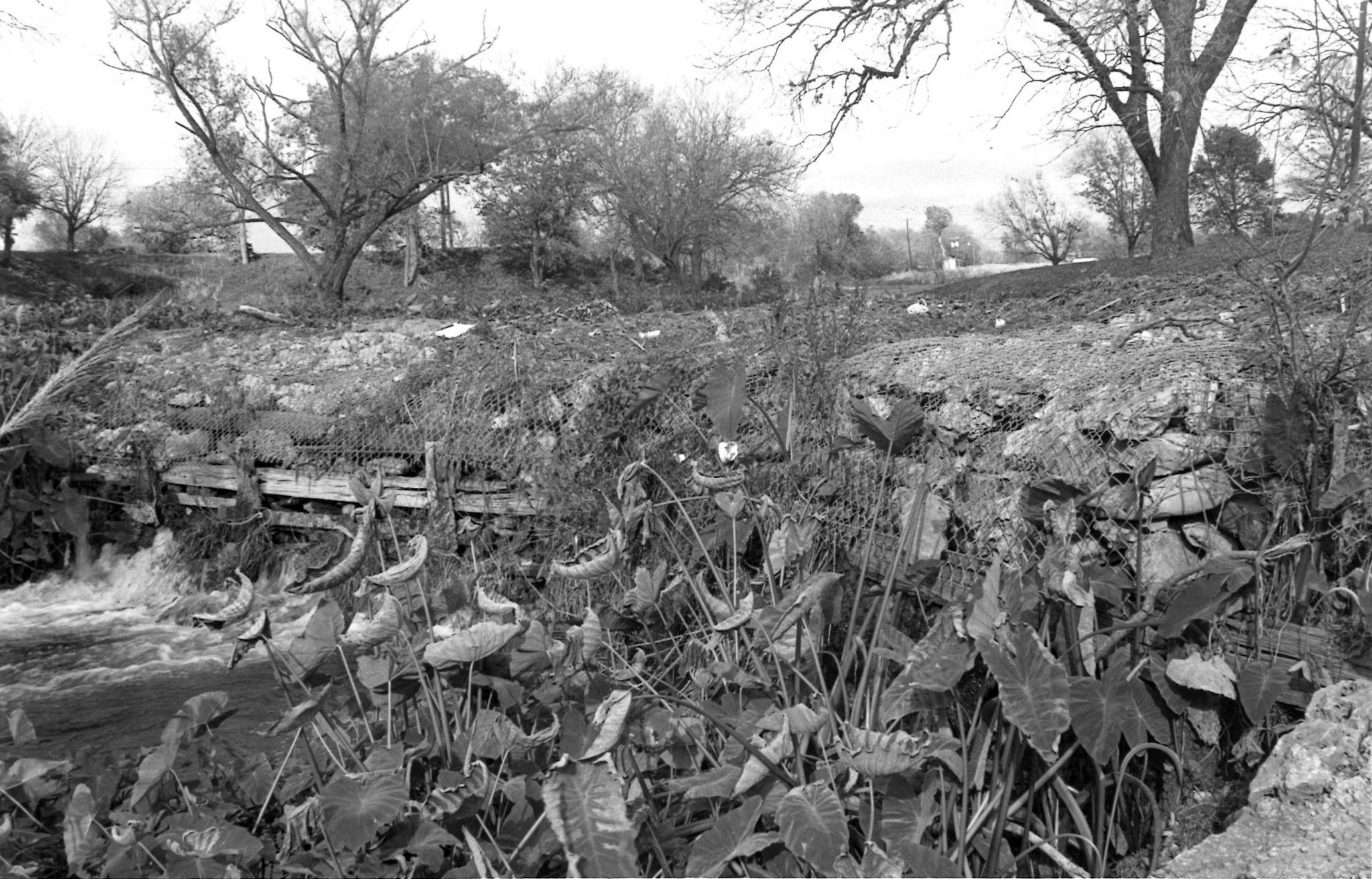 Capes Dam in 1984. Water passed through the dam, not over it. Submitted photos

A history of Cape’s Dam

San Marcos City Council voted to remove Cape’s Dam in March 2016, among concerns of recreation, safety and endangered species. No one talked about history. But the fact that the dam and the mill are over 150 years old, and eligible for the National Register of Historic Places, makes historical consideration of great importance.

In 1867, the dam was built, sending water farther down the left channel, then a slough, to a bluff. The water flows through the mill wall on the bluff, and creates a waterfall into a clear, blue swimming hole where many San Marcans enjoy recreational activities.

Severe floods in 2013 and 2015 left the dam heavily damaged. In need of a repair that never came, the little dam remains crumbled, messy and dangerous. The city and U.S. Fish and Wildlife, instead, decided to remove it.

The Texas Historical Commission was notified of the proposed removal only after the demolition was already being planned and a study was funded on removal. These and lack of opportunity for public involvement were clear violations of the National Historic Preservation Act.

Since, the wheels of demolishing the dam slowed to a seeming crawl, and the San Marcos Historical Commission is set to review the issue on Sept. 6.

While history is not the only consideration for the dam’s repair or removal, its value should not be overlooked. It marks burgeoning industrialization in one of the longest continually-inhabited areas in the U.S. The mill is one of the oldest in Hays County, and the only one from that time period still intact. 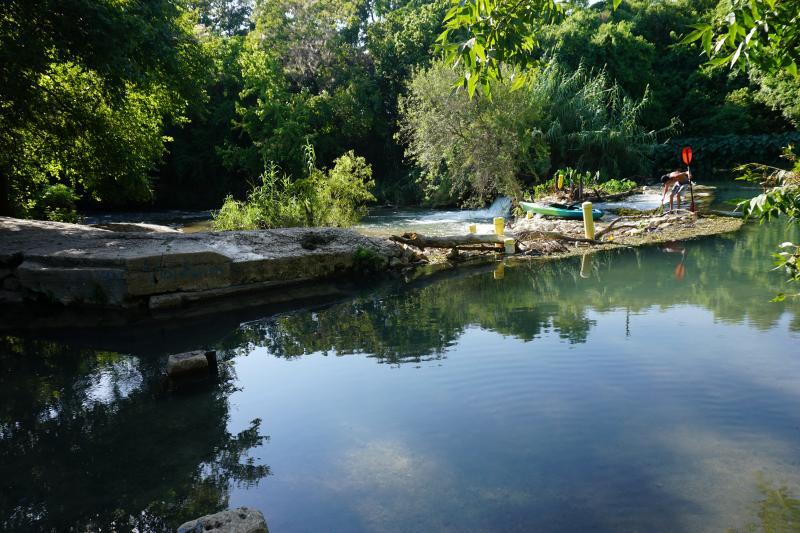 The dam today. It no longer rises above the water and presents a hazard to recreation.

“I think it’s very beautiful,” Knight says of the remaining mill structure. “There’s a lot there we can tell about the post-Civil War period onward. I think that’s what people sometimes forget. Structures, they change over time. Even houses, they get additions, and those can be very important in telling you how people’s lifestyles change.”

Yet, even with only a part of the mill remaining, Knight argues, the historical value is worth preserving.

“If we only saved things that were whole, then we wouldn’t know anything about Native Americans,” she said. “Most of their things are partial.”

The concrete structure at the end of the mill race shows us how people adapted to later technology. Instead of the big mill wheel, there are metal turbines inside the concrete structure, allowing faster turning and more efficient power. Coupled with other knowledge of the time period, historians can piece together the development of Central Texas.

Before the railroad came in 1880, settlers in San Marcos needed a way to cut lumber for their houses. Knight believes it was originally a sawmill for that purpose, and often, mills were used for multiple purposes, including cotton ginning and grist milling.

Because the main structure of the mill is gone, we don’t know for what this particular mill was purposed over the years. Mills were as essential to a community as a sewer and water system are to us today, Knight said. There used to be many mills on the river, as many as a dozen in San Marcos.

Cape’s Dam, itself, is a crib dam, constructed by a series of wooden frames filled with rock, stacked on one another. This allows the water to flow through the dam, but diverts enough to create a steady channel in the mill race.

This type of dam is less likely to break when hit by flooding, Knight says. And if it does break, a crib dam is easier and cheaper to repair.

So why is the city of San Marcos disinterested in preserving their history? Knight says the city used to welcome newcomers with the enticing prospect of building a mill of their own, on the clear waters of the San Marcos River. As integral as the river is to our community, we, its residents, are little informed about its past, Knight argues.

“The city really ought to take advantage of (the mills) and do more to educate people about where the mills were,” she said. “That is the earliest industry in San Marcos.”

Aside from being an unhealthy environment, those same banks of the mill race hold up the concrete mill wall. As the channel walls erode, the wall will destabilize, and, Knight predicts, will likely collapse into the pool below.

No viable solution has been proposed for removing the dam. Removing the dam itself would be cost-effective, but filling in the mill race causes yet another problem. The Woods, the apartment complex along the mill race, has underground reservoirs to release water runoff to the mill race. But with the mill race filled in, the water would likely back up and flood.

No financial assessment has been made for restoring the dam either, which Knight believes would be most effective with someone who has experience with crib dams or historical restoration.

“I’d really like to see someone hired with knowledge of preservation and historic dams and engineering do that kind of assessment,” Knight said.

Preservation Texas is a consulting party on the matter and acknowledges that Cape’s Dam is one of many historic dams that are endangered.

The Hays County Historical Commission and many locals have expressed their desire to restore the dam instead of remove it.

Brusuelas is affiliated with the group Save the SMTX River