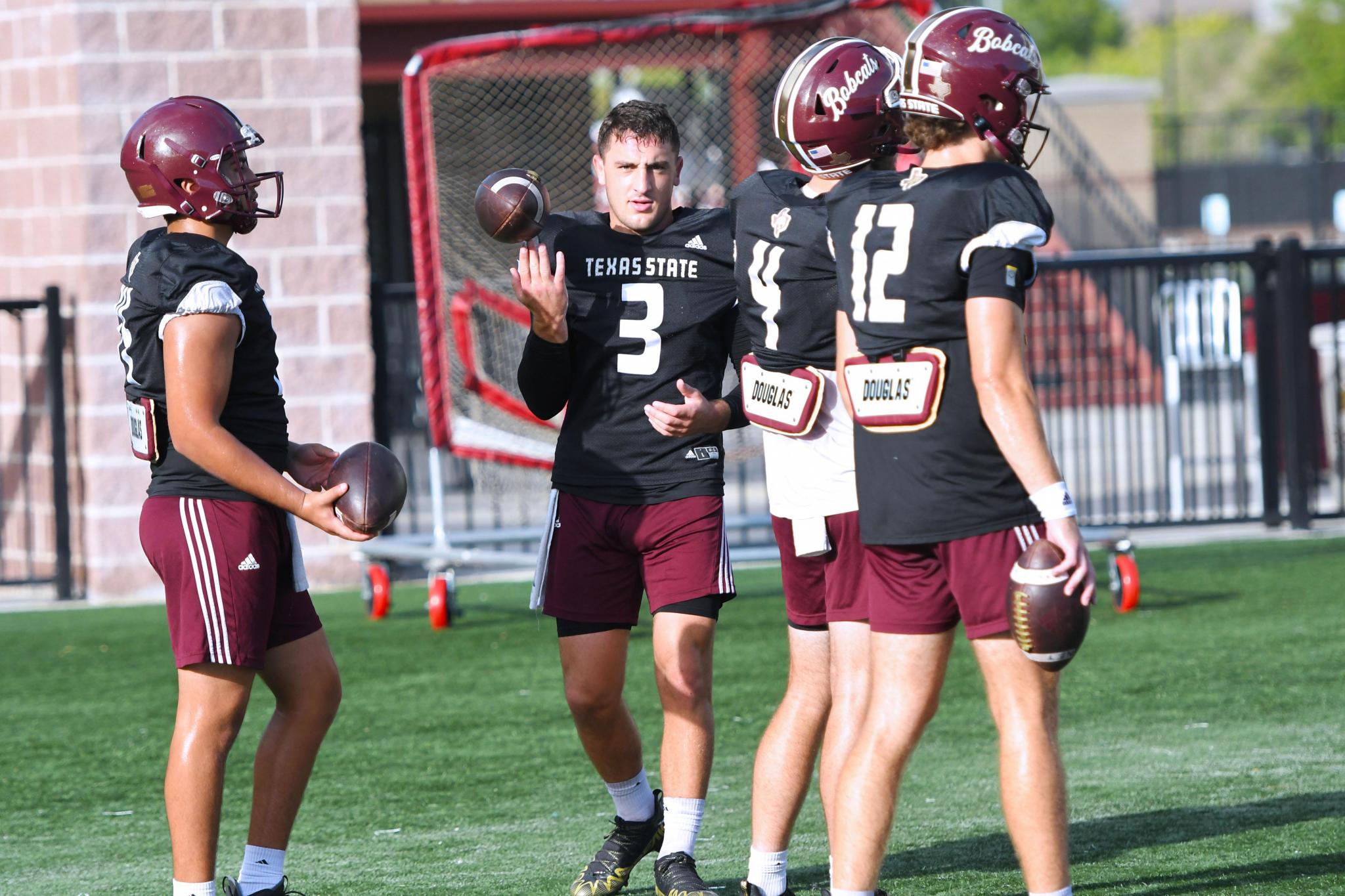 ‘Cats face off with HCU in second home game

The Bobcats need to get their second win of 2022 against the Huskies.

Despite their opponent’s university changing the school’s name on game week, it’s the same Houston Christian (HCU) roster the maroon and gold are preparing for. The Huskies started off their year with a thrilling 46-34 win on the road over Ed McCaffery and Northern Colorado, but fell in their home opener in a heart-breaker to Lindenwood 21-20.

Redshirt junior starting quarterback Layne Hatcher has been praised by head coach Jake Spavital about how much time he spends in the football operations building before every game, and much of that time is spent watching film. Hatcher’s evaluation of the Huskies echoed a sentiment of the Bobcats focusing on themselves and not getting too caught up in the traps the HCU defense might try to set up.

“You know, (Houston Christian tries) to create chaos and put pressure on the quarterback,” Hatcher said. “They’ll blitz and play man and challenge you. They can drop back in the zones — they really just do a little bit of everything — they try to confuse you and create problems by just chaos (and) by keeping you on your toes. So I think if you stay disciplined and stay to your rules and (don’t) try to get too crazy with them, (and) you just stay consistent in your rules that’s how you attack those teams when they try to get really exotic and do a lot of different things.”

On the offensive side of things, the Huskies run an air raid system similar to Spavital and the Bobcats as well as the majority of college football. That doesn’t mean they don’t have some explosiveness out of the backfield though, freshman running back Ismail Mahdi is averaging 131.5 yards per game with a touchdown through two games. Madhi also has pulled off a 78-yard rush during the season, and has contributed in the passing game averaging 74.5 receiving yards per game and 21.3 yards per reception. Madhi has 149 receiving yards in 2022 on just seven receptions.

One aspect of the maroon and gold’s offense that they’ll try to continue is the production from sophomore receiver and DeSoto product Ashtyn Hawkins. “Lil A,” as coach Spavital and his teammates like to call him, has been the main target for Hatcher throughout the first three games for the ‘Cats. Hawkins is averaging 85.3 receiving yards per game with four touchdowns in 2022. Hawkins is moving the sticks for Texas State as well, averaging 9.1 yards per reception on 28 catches. Hawkins has 256 total yards on the season, 142 yards more than the maroon and gold’s second-leading receiver Charles Brown.

The Hatcher-Hawkins connection has been the main bright spot on the Bobcats’ offense so far in 2022.

“I think just the intensity that he plays with and the confidence that he plays with (makes my job easier),” Hatcher said. “And you know, he’s always in the right spot. He’s not gonna make mental errors and you know, I can live with the physical things because that’s natural. That’s the game. There’s always gonna be physical problems but when you just know a guy is going to be where he’s supposed to be and catch the ball when it’s thrown to him it gives you a lot of confidence and a lot of freedom to kind of look for him.”

Texas State will look to win this year’s FCS matchup with Houston Christian on Sept. 24. Kickoff inside Bobcat Stadium in San Marcos is slated for 6 p.m. The maroon and gold will look to stay undefeated at home in 2022.