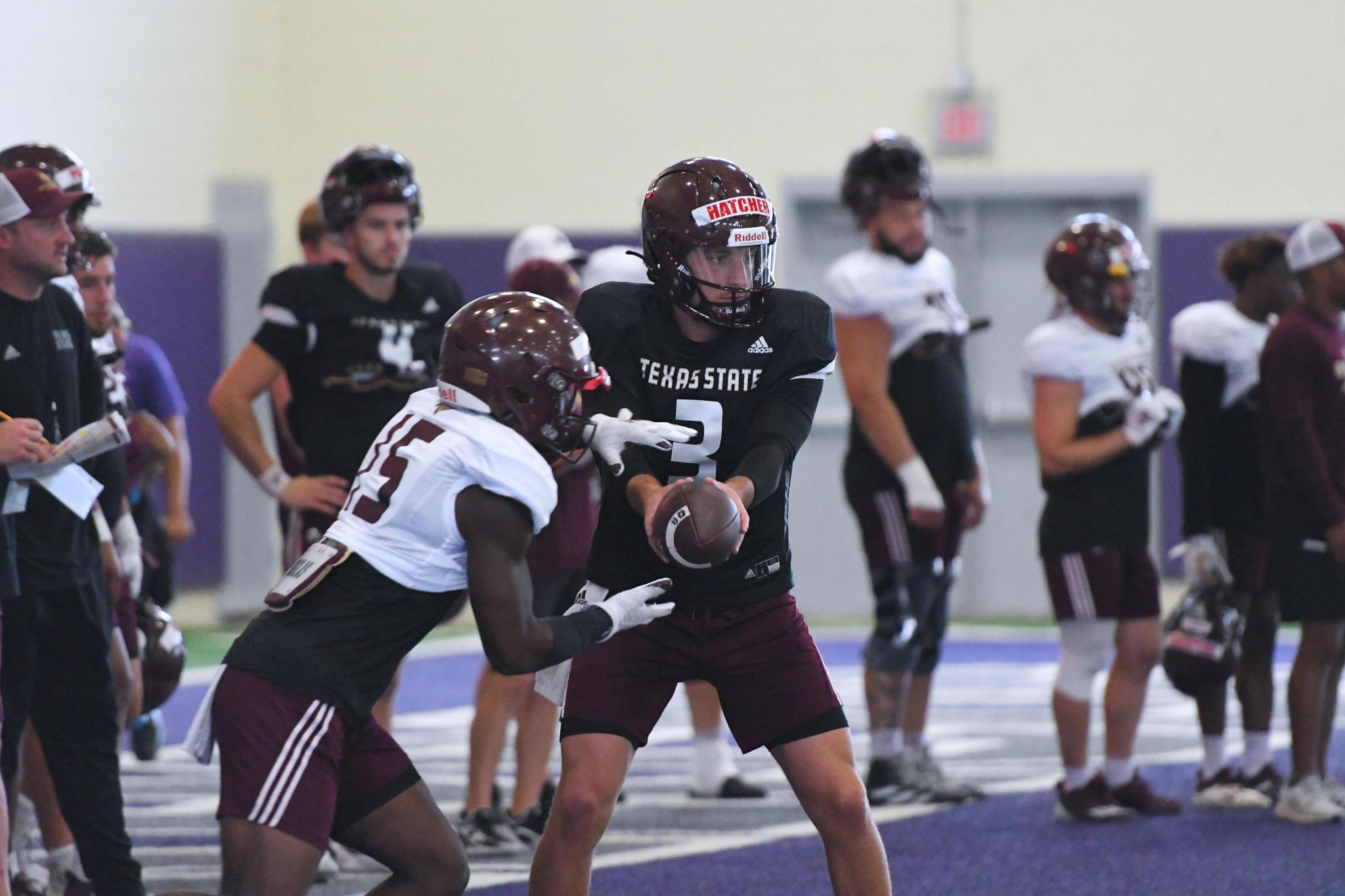 The Bobcats are inching closer and closer to kickoff against Nevada.

Not only did head coach Jake Spavital name redshirt junior and Arkansas State transfer Layne Hatcher Texas State’s starting quarterback, but the maroon and gold are also heading into their “mock week.” The week traditionally happens on the first week of school — barring a week zero game — to get players acclimated to their class schedules and how the team will operate throughout the season.

During a week focused on organization, the ‘Cats had to move their Tuesday practice to the San Marcos High School indoor facility due to lightning — giving players even more to juggle on a week where they have to learn how to balance it all.

“Transitioning into mock week is kind of like pulling teeth in a way,” Spavital said. “But it’s very necessary for the development of a game week in your program, because this is the acclimatization phase of them going into their class schedules. There’s a lot of moving parts they (have) to figure out — their study hall hours, their class schedules, when they’re going to eat and when they’re going to do all the off-the-field type of things.

“(That’s) on top of how we educate them (on) how we do a Sunday practice, what we do on Mondays, how we do a Tuesday and Wednesday practice and also with our Thursday walkthroughs and our Friday run-through (of) plays. Then it leads up to Saturday which is a mock game, but really the whole purpose of this week is to make sure that we smooth out the wrinkles. (That way) when we get to game week, it runs smoothly and there’s no distractions.”

While the Bobcats may have a lot on their plate adjusting to their in-season off-the-field responsibilities, they are getting more clarity on the field.

Many position battles are down to the wire, with starters on the offensive line and at running back being solidified. Spavital expects the wide receivers and defensive backs to have more of a “revolving door” approach when it comes to starters and playing time.

The defensive line is one of the key ongoing position battles, mainly due to the number of talented transfers added to the trenches like redshirt sophomore Myron Warren from Texas and redshirt freshman Dominique Ratcliff from Louisiana. The Bobcats do finally know who will be operating their offense, with fifth-year junior Hatcher taking the reins.

“(Our starting quarterback) is (going to) be Layne Hatcher. It was a great competition, but he won every category,” Spavital said. “From efficiency to decision making, touchdowns (and) completion percentage. More than likely he was a unanimous vote-getter for team captain, so it shows you the impact that Layne’s already had on this program. And you know, he was one of the highest vote-getters on our team, so it just shows you what he had and what he brings to this team already.”

Last week, Spavital mentioned turnovers on offense and getting off the field on third down as the main areas the ‘Cats needed to improve on moving forward in fall camp. The maroon and gold have seen improvement in the turnover margin offensively, but have some other areas they need to clean up still as well. Defensively, Texas State is continuing to focus on getting stops on third downs.

“We need to get off the field on third down (on defense),” Spavital said. “Offensively, we need our third-down percentage to increase as well. You know, it’s scoring touchdowns in the red zone for the offense. I thought the defense did a decent job of holding them to field goals, (but) the offense needs to be more efficient in scoring. But one of the main (emphases) that we’ve (had) in fall camp is the negative plays. I think defensively you want to have a lot of negative plays, and Zac (Spavital)’s put an emphasis on that. In the past, we knew we were over probably 10 plays a game in negative yards (and) negative plays. So that’s something that we’ve been putting a big emphasis (on) offensively is making sure we’re not moving backwards.

“When we get in a rhythm I think we’re pretty dangerous, but it’s when we’re sputtering and going back and the inconsistencies of that makes it difficult to call plays. And it’s hard for us to get into a rhythm thing so that’s kind of been the main talking point as of lately. But I feel like if we’re eliminating negative plays offensively and we’re creating negative plays defensively, you know, I think that’s going to work (to) your advantage (in) all the other categories.”

The Bobcats will finish up their mock week before jumping into regular season preparation next Monday for Nevada. Texas State will face off with the Wolfpack at Mackay Stadium in Reno, Nev., on Sept. 3 at 4:30 p.m.