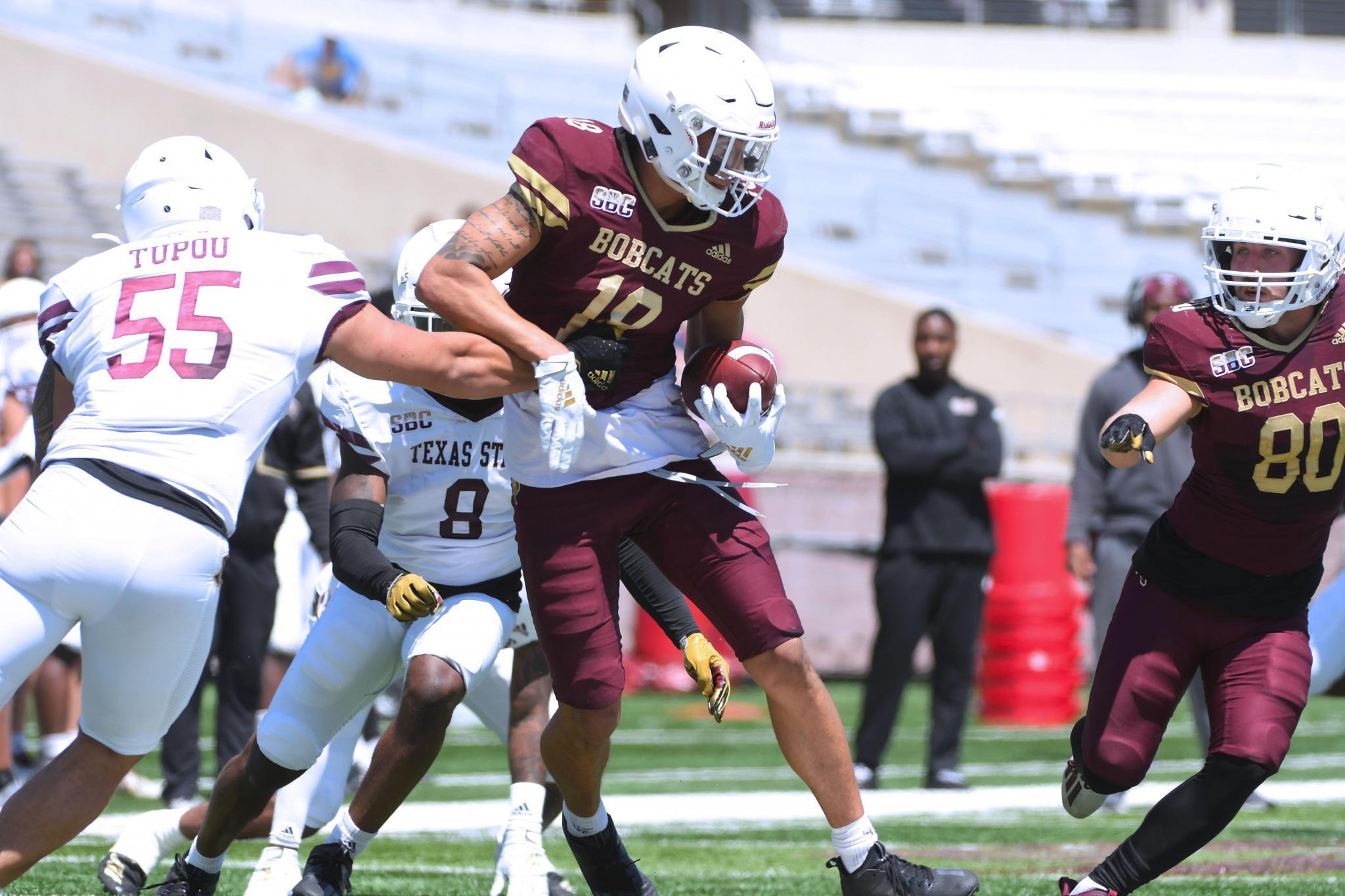 The ascension of Marcell Barbee

It was a typical late night for Jacob Peeler and Marcell Barbee. Peeler was browsing the internet for a new wide receiver. Barbee was playing video games.

Peeler was a member of Ole Miss’ staff from 2017-19 and had proven himself as one of the top receivers coaches and recruiters in the nation. Three of his top wideouts are currently in the NFL: 2020 Pro Bowlers A.J. Brown and D.K. Metcalf, and 2021 second-round pick Elijah Moore.

But on Dec. 1, 2019 — three days after the Rebels finished their season with a 4-8 overall record — Ole Miss announced the firing of head coach Matt Luke. And on Dec. 12, Bruce Feldman of The Athletic reported that Peeler would become Texas State’s new offensive coordinator.

Peeler said that he accepted the job the same day his wife, Tori, gave birth to their son, Grayson. He’d been tasked by Bobcats head coach Jake Spavital with finding a plug-and-play junior college receiver and began his search when he returned home with his family in Oxford, Miss.

The coach started by filtering through the stats of Mississippi schools. He moved on to California, then Kansas. It was 2 a.m. by the time Peeler began combing through Iowa and found Barbee’s name.

“I Googled him and found his Hudl film and fell in love with his film,” Peeler said. “So I remember, I followed him on Twitter and he followed me right back.”

Peeler hadn’t yet updated his Twitter bio that still stated he was a coach at Ole Miss. Or his header photo, which featured Brown, Metcalf and the “Nasty Wideouts” moniker they made famous. He sent Barbee a direct message, complimenting his film. It was 3 a.m.

Barbee’s only other offers came from Southern Miss and UMass. He tweeted on Nov. 7, 2019, that he’d received an offer from Texas State, though it came from former wide receivers coach Ron Antoine, who was let go at the end of the season.

But now Barbee was back on the team’s radar. When Peeler brought up Barbee to Spavital, the head coach was already familiar with the name. The two sides came to an agreement quickly, with Barbee announcing his commitment to the Bobcats on Dec. 22.

Barbee’s since become one of the top pass-catchers for the maroon and gold. He tied with former slot receiver Jeremiah Haydel for a team-high 40 receptions and also led Texas State with 584 yards and 10 touchdowns in 2020, earning a spot on the All-Sun Belt Third Team.

“I think he’s an unbelievable player. I think you guys got a little bit of a taste of it last year,” Spavital said. “I think he’s really starting to be very comfortable with this team, this offense and his position where, you know, I think he’s got that big playmaking ability, as you guys see. And he’s gonna be a guy we feed the ball to a lot.”

McBride finds sophomore wide receiver Marcell Barbee 33 yards down the field for the score. It's Barbee's seventh TD of the season. Extra point is good and the Bobcats have their first lead of the game @smdrsports #TXST 21#Louisiana 14
11:40 left in the 2nd pic.twitter.com/0xCxokVgiL

The 10 touchdowns are especially notable. The Pueblo, Colo., native was one of just 11 FBS players to catch double-digit TDs during the season. Of the group, Barbee was the only one to come through the JUCO ranks.

All but two of his touchdowns came inside the 20-yard line. Barbee considers himself an all-around receiver and not just a red zone threat — his other two touchdowns came from 33 and 43 yards out, showcasing his burner capabilities. But he’s got a unique skill set that is particularly dangerous near the end zone.

His connection with quarterbacks is a major factor. Barbee isn’t just a favorite target of one signal-caller. He’s a favorite of all of them. Last year, six of his TDs came from redshirt sophomore Brady McBride and four came from junior Tyler Vitt.

Brady McBride throws across his body, finds Marcell Barbee for a 19-yard TD. Extra point is good. Bobcats punch the No. 12 team in the country in the mouth on the first drive of the game @smdrsports #TXST 7#BYU 0
11:33 left in the first pic.twitter.com/Rb4ziLkPP2

Barbee’s chemistry with Vitt formed steadily over weeks of practice after the wideout enrolled at Texas State on Aug. 1, 2020. His relationship with McBride was a bit more rushed.

Barbee’s apartment wasn’t ready to move into when he first moved to San Marcos and he needed a place to live until he could. McBride opened his doors, offering Barbee and fellow JUCO receiver Kevin Howard to stay in his living room for a few weeks until they were settled.

“That was probably one of the most rare, weird occasions I’ve ever been in,” Barbee said. “(McBride) seemed like a cool dude when I first met him. You know, he was really, really quiet at first, he didn’t want to say too much. But then he just started opening up and he started telling me — just things like waking me up for practice, going over film and stuff like that.

“I drove them around for, like, a month or two, so I got to know them pretty well,” McBride said. “He’s easy to be around, he’s always gonna crack jokes.”

A study done by Daniel Wilco and published by the NCAA in 2017 showed that the average Power 5 wide receiver stands at 6-foot-0.61 and 192.13 pounds. So at 6-foot-2, 195 pounds and playing in a Group of 5 conference, Barbee has excellent size for his position.

He couples it with an altitudinous vertical that makes his catch radius much larger, extending beyond most defenders’ reach.

“I always heard the stories about him … And they’re all true,” said redshirt freshman quarterback Ty Evans, a fellow Coloradan who went to high school an hour north of Barbee at Monument Palmer Ridge. “I remember people telling me he had a basketball game and the first thing he’d do is dunk from underneath the basket, not even warmed up or anything. And now knowing him, I completely believe that.”

Peeler and all three QBs praised Barbee’s ability to “go up and get it.” He’s got balletic body control in the air, putting himself in good position to track the ball mid-flight and make the grab.

Being in the red zone means having less space to roam in terms of width and length. Barbee makes room by using the third dimension. Fade routes can be distinctly difficult to stop as a defensive back. A 50-50 ball is not close to being an even split against Barbee.

Brady McBride finds Marcell Barbee on the fade for a 6-yard scoring pass. Eagles called for pass interference on the play, which is declined. Extra point is good.#TXST 14#BC 7
59 seconds left on the clock pic.twitter.com/bIdVB0sXEq

If he can’t manage to find a good angle for a jump ball, Barbee has other methods of getting open, too. He credits his coaches for equipping him with a toolbelt of releases that help him get off the line of scrimmage and a step ahead of his opponents.

Marcell Barbee reels in his 8th this season from 14 yards out. Barbee has now caught a TD in each of the past three games. He's tied for fourth-most in program history for receiving TDs in a single season @smdrsports #AppState 31#TXST 17
11:20 left in the 4th pic.twitter.com/izEK39j5iJ

Barbee has much higher expectations for himself in 2021. Jake Spavital and McBride both noticed him taking on a more vocal leadership role in training camp. Barbee said he feels much more confident and mentally prepared heading into his second year with the Bobcats. He was voted to the Preseason All-Sun Belt Second Team in July.

He’ll get a chance to score a few more touchdowns when Texas State’s season officially kicks off against Baylor on Saturday at 6 p.m. inside Bobcat Stadium.

“He has a chance to be one of the better, if not the best, (receivers) in this league,” Peeler said. “I think that’s a testament to him and the work ethic and all the work he’s put in.”