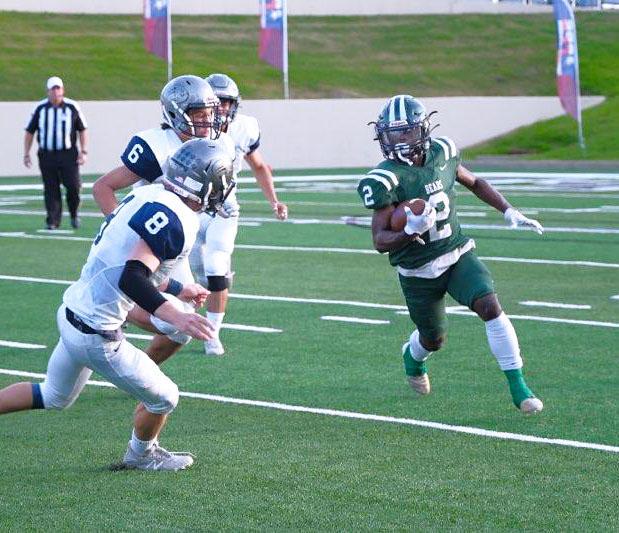 WACO — There is only one word necessary to describe the San Marcos Academy’s football team, cheerleaders, band, and fans: family. The whole family was out to support the team from the moment the players boarded the bus on Thursday. The community sent the bus off in style with cheering fans and an escort from the Hays County Sheriff’s department down Ranch Road 12. Bear Country’s residents were state-bound, and Waco ISD Stadium was the destination.

San Marcos Academy previously won an 11 man TCAL football championship in 2015. This year’s six man team was up against TAPPS competition, and the opponent was even stiffer.

Opposite the Bears in the TAPPS Division I state championship was the undefeated Houston Emery/Weiner Jaguars. The Jaguars were undefeated for a reason. They were the most athletic and well-coached opponent the Bears faced this season.

San Marcos Academy won the coin toss and elected to receive. Fast starts were a signature for the team all year. Leads allowed more aggressive play calls, and the result was even more scoring. On their first drive, however, the Bears fumbled a high snap in their own territory. A Jaguar recovery set up a short field going the other way. Two plays later, the Jaguars were in the end zone.

The next Bear drive was cut short by an interception. Another short drive made the Emery/Weiner lead 16-0. San Marcos Academy played the rest of the game from behind but did not go out quietly.

Senior Chizi Efobi was a lightning rod in all three facets of the game. He had topped his previous season-best kickoff return of 80 yards and went as far as possible. Efobi received the ball with his heels in the back of the endzone, zipped down the middle and cut to the left sideline just before midfield for an 89-yard touchdown return. His performance was so electric that after one of his returns, the stadium lost power.

Senior Mason Loep made a spectacular catch on 4th down and goal from the 14-yard line to get the scoring started for SMA. Recognition of a favorable height matchup on the outside set up the play. Junior quarterback Mitchell Howard then threw a precise fade ball for his big receiver to go retrieve. Loep had two defenders suffocating him and still managed to come down with the ball. It was a standout play in a standout year for a player who did not even expect to be playing football this season.

Ultimately, the Jaguars (12-0) prevailed in a 69-24 victory. San Marcos Academy (10-4) did manage to put the most points on the board against Emery/Weiner since the Jaguars’ season opener.

The team was led by a group of five seniors: Chizi Efobi, Inaki Infante-Valenzuela, Jacob Hammock, Austin Sperry, and Mason Loep. A resounding theme echoed by each player was the special brotherhood they all had with their teammates.

Small huddles of players and coaches were formed at the conclusion of the awards ceremony. Players shared support with each other and embraced the moment. The passion for the game and their compassion for each other were evident.

“There are certain things about the whole community that we have at SMA that you just can't replace,” said senior Austin Sperry. “I don't think we would have made it this far if it weren't for just how close-knit we were because there was no way that we could have made it through that (Austin) Veritas game (in the semifinals without it). It took a force of will to come through something like that and I'm glad that we did.”

Head coach Chris Chacon made his inaugural season with San Marcos Academy a memorable one. Leading a team to a state championship is a feat few achieve ever, not just in their first season with a team.

“It's part of ball, big moments. I have to give credit to our senior, Chizi Efobi, (he) did all he could in the return game,” Chacon said after the game. “The bright side is we graduate four starters but we return everybody else. It's exciting to know what those five seniors, the legacy that they left and the culture we've tried to create over the last year (and) what we have in store for the future for this program.”

The program is also planning for long-term success with an emphasis on their middle school development led by coach Matt Contreras.

The team will be in good hands next year with many strong rising seniors. Cole Krackau will be in the backfield with Mitchell Howard and Wilson Guenther. Junior Blanco and T.J. Murphy will lead block for the backs and likely have large defensive roles as well. The Bears will continue to bring the “Boom Shakalaka” for years to come.