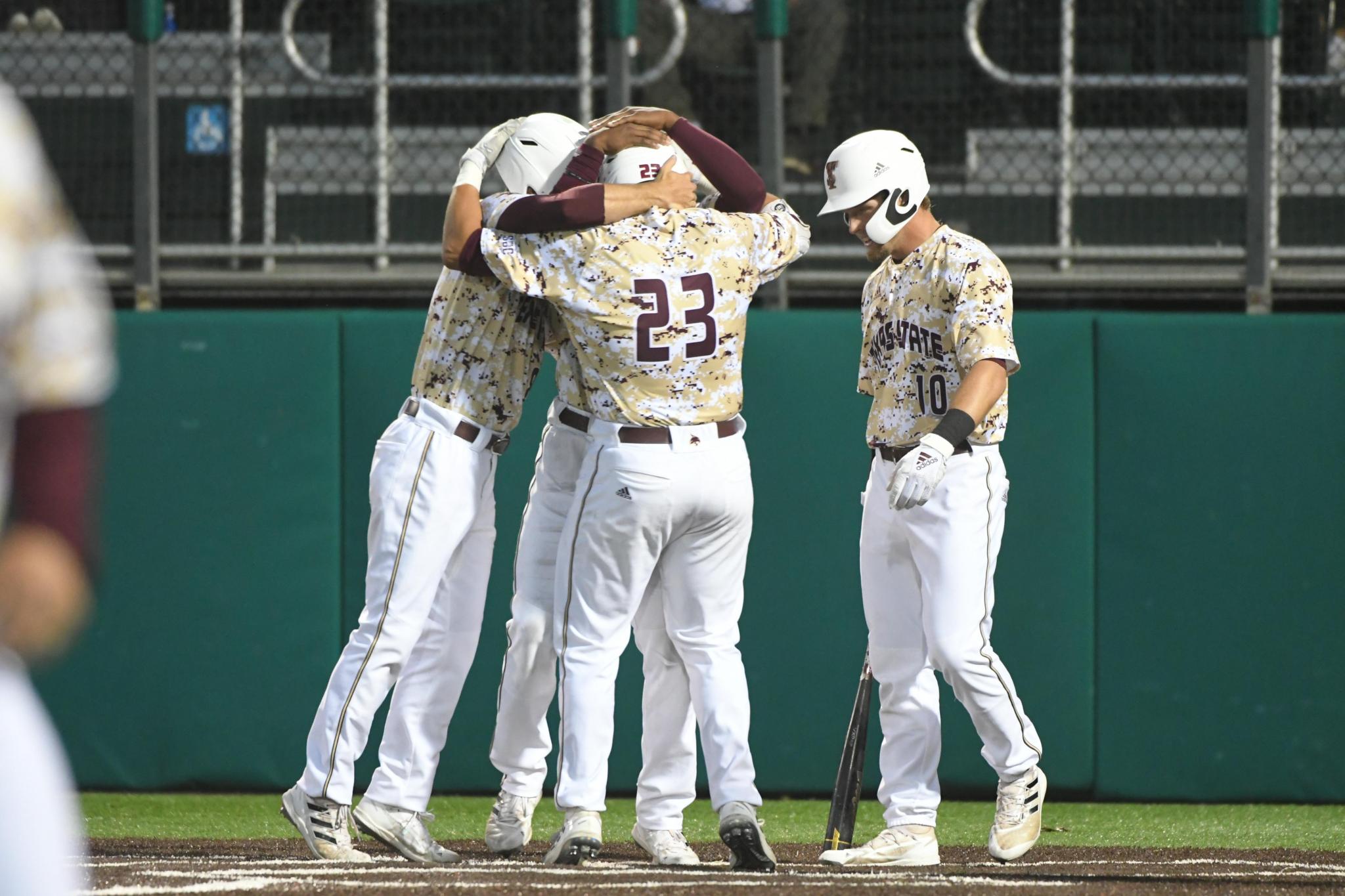 No. 17 Texas State almost got too comfortable on Tuesday.

The maroon and gold nearly run-ruled UTSA in the teams’ midweek matchup inside Bobcat Ballpark, but a late spark by the Roadrunners had the hosts unraveling. The team held off the rally attempt despite a seven-spot in the ninth inning by its I-35 rival, avoiding catastrophe and claiming the 14-12 victory.

“I gotta catch my breath a little bit because I went from being very comfortable to very nervous there the ninth. But a win's a win, right?” head coach Steven Trout said. “We found a way to win. I thought our offense was really good tonight, took advantage of some free 90s they gave us and then barrelled up a lot of baseballs. And so, those are really good arms over there, they've got some guys with some power stuff and you gotta be patient with them. And then when you get them, get them. And so I thought it was a pretty good night.”

UTSA (24-13, 9-6 Conference USA) opened the game scoring a pair of runs in the top of the first, but the hosts countered with one of their own in the bottom frame — an RBI double from junior left fielder Jose Gonzalez.

Neither team scored in the second. The visitors added another run in the top of the third to extend the lead back to two but wouldn’t score again until the seventh inning. Gonzalez swung for a base hit in the bottom of the third and senior third baseman Justin Thompson and right fielder John Wuthrich both drew walks in the next two plate appearances to load the bases with no outs.

Freshman first baseman Daylan Pena earned another base on balls, allowing Gonzalez to score a free run. Redshirt sophomore catcher August Ramirez used a sacrifice fly to let all runners tag up a base, with Thompson crossing the dish and tying the game. And a wild pitch allowed Wuthrich to score the go-ahead run, pushing the maroon and gold in front, 4-3.

Texas State kept the runs coming in the fourth, putting up a seven-spot on six hits and no errors. Senior second baseman Cameron Gibbons and centerfielder Ben McClain led off with walks and Dalton Shuffield swung for a single to score Gibbons. Gonzalez hammered a three-RBI home run in the next at-bat, his fourth of the season. Thompson and Wuthrich each added base hits, putting runners on the corners, and Pena tallied another RBI single, scoring Thompson.

Jose Gonzalez (@JGonzalez0815) clears off the bases with a three-RBI home run to left centerfield, extending the lead to 8-3 pic.twitter.com/T54Ovc52Hl

Ramirez struck out, but senior designated hitter Wesley Faison sent a double to left centerfield, scoring Wuthrich and moving Pena to third. Gibbons added one more run in his second at-bat of the frame, using a sac fly to plate Pena for an 11-3 lead.

“We were patient,” Trout said. “We didn't get out of our approach and finally just barrelled up some baseballs in the middle of the field. And so those guys, when they're hacking, they're really, really good. And so they did a really good job just staying patient. And then when this offense gets going, it becomes really fun. You know, they kind of feed off one another and guys are ready to get to that home plate as fast as they can and get it going. And so, this team's built off momentum, so it was a really good job, once they got it going, to keep it rolling.”

The Roadrunners cut into the deficit with two runs in the second. The Bobcats countered with three in the bottom frame, though left a runner stranded, which would have triggered the run rule. Instead, the game continued, with neither team scoring in the eighth.

Trout pulled most of his starters out of the game heading into the ninth, feeling confident some of his younger players would collect the final three outs needed for the win. But UTSA connected on four singles in the first five at-bats of the inning, scoring one run and loading the bases with one out. The visitors drew a walk in the next plate appearance, scoring a free run, and the hosts swapped pitchers.

A fielding error on the next play allowed the Roadrunners to score two more, slashing the lead down to five. They drew a walk and added another base hit to make it a four-run game, loading the bases again and putting the tying run at-bat.

Trout didn’t want to let the win slip away and called up his most trusted reliever, Tristan Stivors. The senior closer fanned the first batter he saw, but surrendered a single and a walk, giving up two more runs, putting the tying run in scoring position and the go-ahead run on first.

Stivors finally struck out the final batter looking, extinguishing the fire for his eighth save of the season and sealing the 14-12 victory.

“It's the adage, ‘You never know which run's gonna win the baseball game.’” Trout said. “So I've seen crazier stuff than that and so, you never know with a great offensive team. And a great team like them, they're gonna keep fighting and keep battling, they're not gonna give in.”

Junior right-hander Triston Dixon (6-0) received the win, forcing a double play in the top of the fourth to strand three UTSA runners and keeping the Roadrunners off the board in the fifth. Gonzalez finished the night with a career-high five RBIs, batting 3-4 with a walk, a double and a home run. Shuffield, Wuthrich and Gibbons all chipped in two hits each. The maroon and gold have now won four of their last five meetings against UTSA.