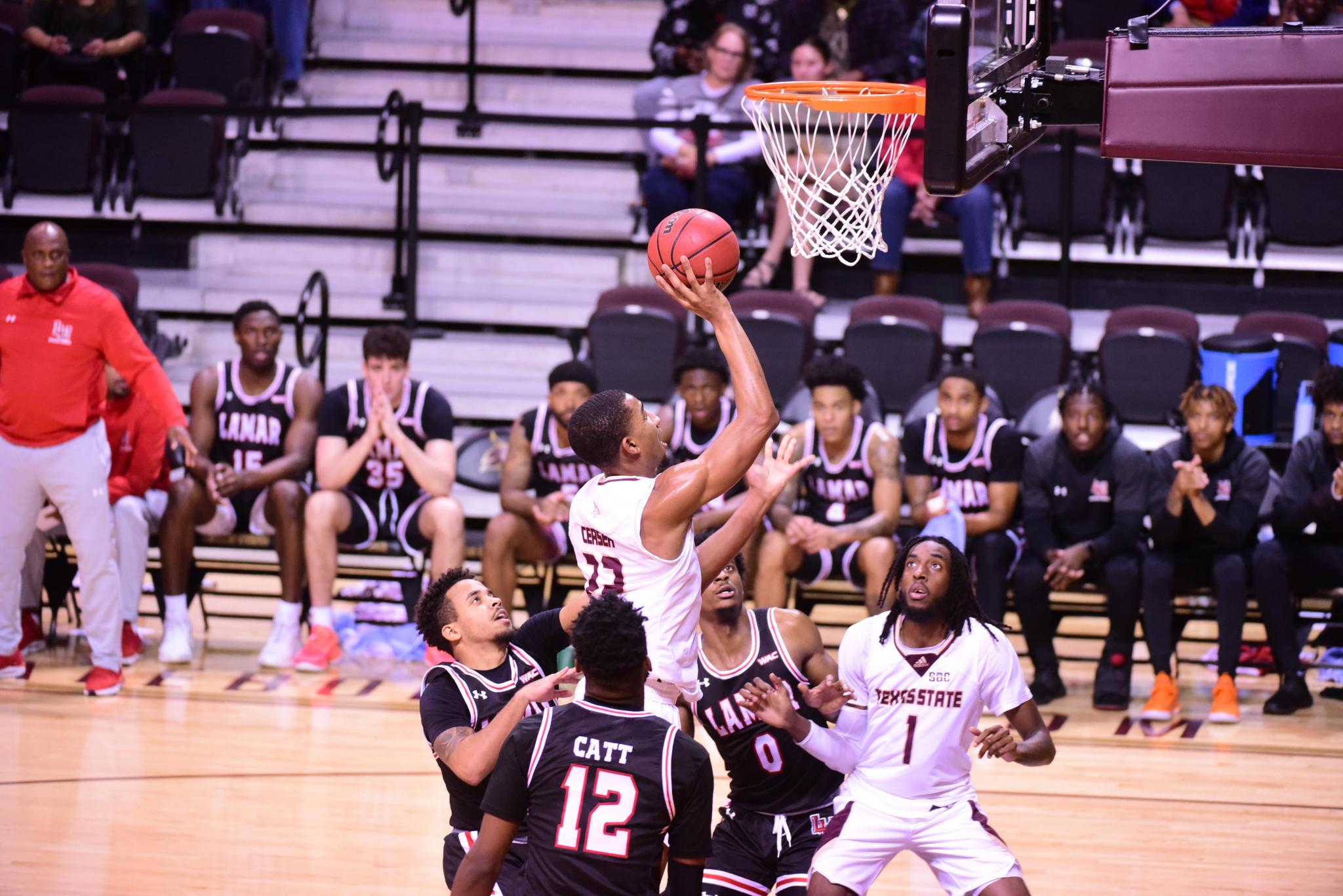 The Tigers came out unafraid of the Bobcats in the opening half of Saturday’s game inside Strahan Arena. They got into the home team’s personal space on defense, forcing nine turnovers and holding the maroon and gold to 43.3% shooting in the first half.

An 8-0 run by the hosts at the end of the first half gave Texas State a 34-20 lead heading into the break. But head coach Terrence Johnson knew his players needed a better response in the second half.

They provided one. The Bobcats went on to outscore Paul Quinn by 25 in the final 20 minutes, earning a 75-36 win.

“I told them, ‘We’re going to hit first,’” Johnson said. “I reminded them, ‘You didn't start playing basketball in a gym, you started on the park.’ So it's a mentality thing. We adjusted our mentality.”

Texas State’s defense was its saving grace. The team held the Tigers (8-1) to 29.6% shooting in the first half, which helped the hosts hold a slim lead. The Bobcats (9-2) didn’t allow much near the basket all game, setting a new program record with 14 blocked shots — five of them coming from senior forward Nighael Ceaser.

“We were playing our type of defense, just sticking to our game plan,” Ceaser said. “And I just so happened to be in the right position in help defense to make the play.”

Johnson turned up the heat in the second half, running a 1-2-2 full-court press at times. Paul Quinn committed nine turnovers and the tempo of the game sped up, opening thing up on offense for the maroon and gold. Dylan Dawson was the biggest beneficiary. Texas State found the sophomore guard wide open in the corners several times, resulting in three 3-pointers from Dawson.

The Bobcats are starting to heat up now - Dylan Dawson (@thedylandawson) just hit an and-1 3-pointer and free throw pic.twitter.com/kLhHT0SIeG

Dawson’s triples helped the hosts go on a 20-5 run.

“I have great teammates who are able to find me and get me open,” Dawson said. “And then after that, it's just my job to knock down shots. Knocking down shots brings energy and that's what really got us started in the second.”

The Bobcats finished the second half scoring 41 points and holding the Tigers to 16, resulting in the 75-36 victory — the team’s eighth in a row. Dawson led the team with a career-high 15 points, followed by Ceaser with 12 and senior guard Mason Harrell with 10. Ceaser added seven rebounds, only trailing fifth-year senior forward Isiah Small, who had eight boards to go along with four blocks.

It was the exact kind of confidence-boosting win the team needed with Sun Belt play so close.

“(It's) just us being able to connect on and off the floor,” Dawson said. “You know, it's us gelling together in practice and just working on things that coach emphasizes. It just translates onto the court and we're able to put it to show for everybody.”

Texas State will close out its non-conference schedule on Wednesday, taking on Houston (9-2) on the road at 4 p.m. Johnson hopes the slow start against Paul Quinn will give his players an idea of what they’ll be up against.

“I thought that our guys understood that I wasn't trying to make it a street fight. But I was trying to allow our guys to dictate how this thing is going to go tonight,” Johnson said. “And I thought they did a really, really good job of responding to that and responding to me.

“At halftime, I said, ‘If you think that this is a physical game, wait till (Dec.) 22.’ Your non-conference is there to prepare you. You know, we're taking steps. So you know, I think throughout the course of it all, it's important that our guys understand that all of this is an opportunity to grow and develop and it's preparing you for something. It's just purposeful and intentional, it's going to all show its face at some time. And I just appreciate the fact that our guys responded to that.”