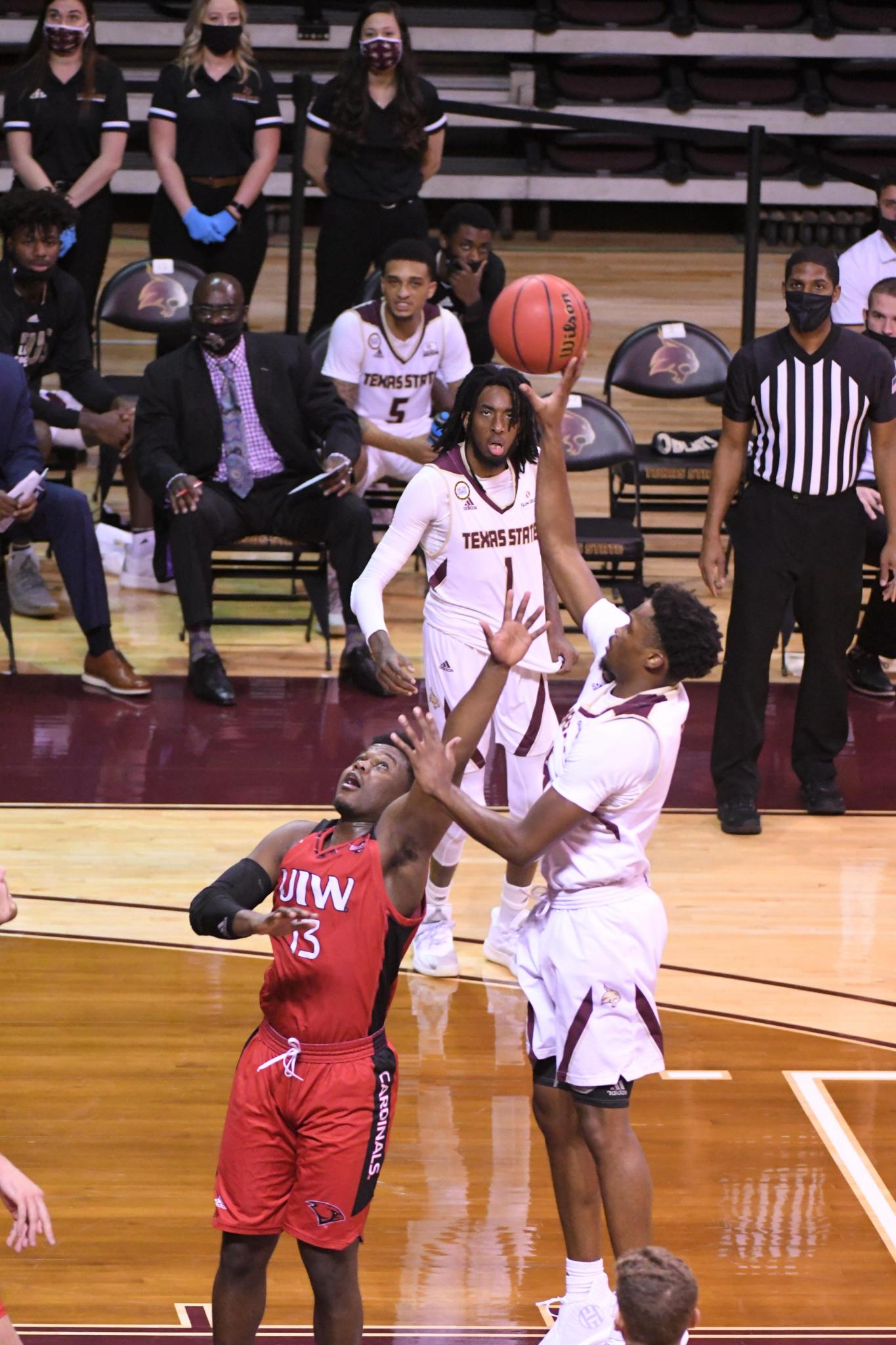 A 23-point afternoon by junior guard Caleb Asberry led Texas State to a sweep of Little Rock as the Bobcats defeated the Trojans on Saturday, 67-56.

Texas State redshirt senior guard Marlin Davis and Trojans junior guard Markquis Nowell were both held out of Saturday’s game after throwing punches during an altercation on Friday. But the Bobcats (9-4, 3-1 Sun Belt) got a big lift by the insertion of senior guard Shelby Adams into the lineup after he missed Friday’s contest.

Adams scored 10 points in the opening nine minutes of the first half, eight of them coming in the paint. Adams’ outburst helped the visitors establish a 20-16 lead with 11:35 left in the period.

“The consistent play of Caleb Asberry and (senior forward) Isiah Small was outstanding, but this game ball has to go to Shelby Adams,” interim head coach Terrence Johnson said in a statement. “His ability to impact winning and inspiring our guys to be selfless is unmeasured. We have to keep getting better and remain humble and hungry.”

Asberry took over the offensive load from there. The junior, who sank four 3-pointers on two separate occasions this year, hit a career-high five shots from outside on six attempts.

Asberry’s comfort shooting from deep forced the hosts to spread out further from the basket on defense and helped open things up inside for the Bobcats. The visitors finished the game outscoring Little Rock 38-16 in the paint.

Still, Texas State had trouble shaking the Trojans (7-6, 3-3) late in the second half. Little Rock sophomore guard Marko Lukic earned a putback layup to trim the deficit to 49-47 with 9:29 to go. And while the hosts never tied the game or took the lead, they never trailed by more than six points until the final two minutes.

A pair of free throws by Lukic made it 60-56 at the 2:09 mark. Bobcats redshirt junior forward Alonzo Sule scored in the post to make it a six-point game again. Trojans senior guard Ben Coupet Jr. received a dribble handoff on the next possession down but had the ball stripped away by Asberry, who dunked it on the other end.

The broadcaster called this a "Hello, how ya doing?" by Caleb Asberry @smdrsports pic.twitter.com/PQ0j6gvqG0

Little Rock missed its next shot and Sule dropped in another layup to give the visitors a double-digit lead. Junior guard Mason Harrell added a free throw to put the game away at 67-56.

It’s the third time Asberry has reached 20 points this season. The Bobcats are 5-0 when he leads the team in scoring. Asberry also led the team with seven rebounds, followed by Adams with 11 points and six boards. Harrell added another 10 points.

“Complete team effort this weekend," Johnson said. “We definitely embraced the next man up mentality all weekend and I am so proud of this group of men. They are maturing and making adjustments from one game to the next. Our goal is to get one day better, to win the day. We are finding out how to win and it is a fun process.”

Texas State will look to extend its three-game winning streak next weekend when it visits Louisiana-Monroe (4-9, 2-4) for a pair of matchups, Friday’s game tipping off a 6 p.m. and Saturday’s at 4 p.m.