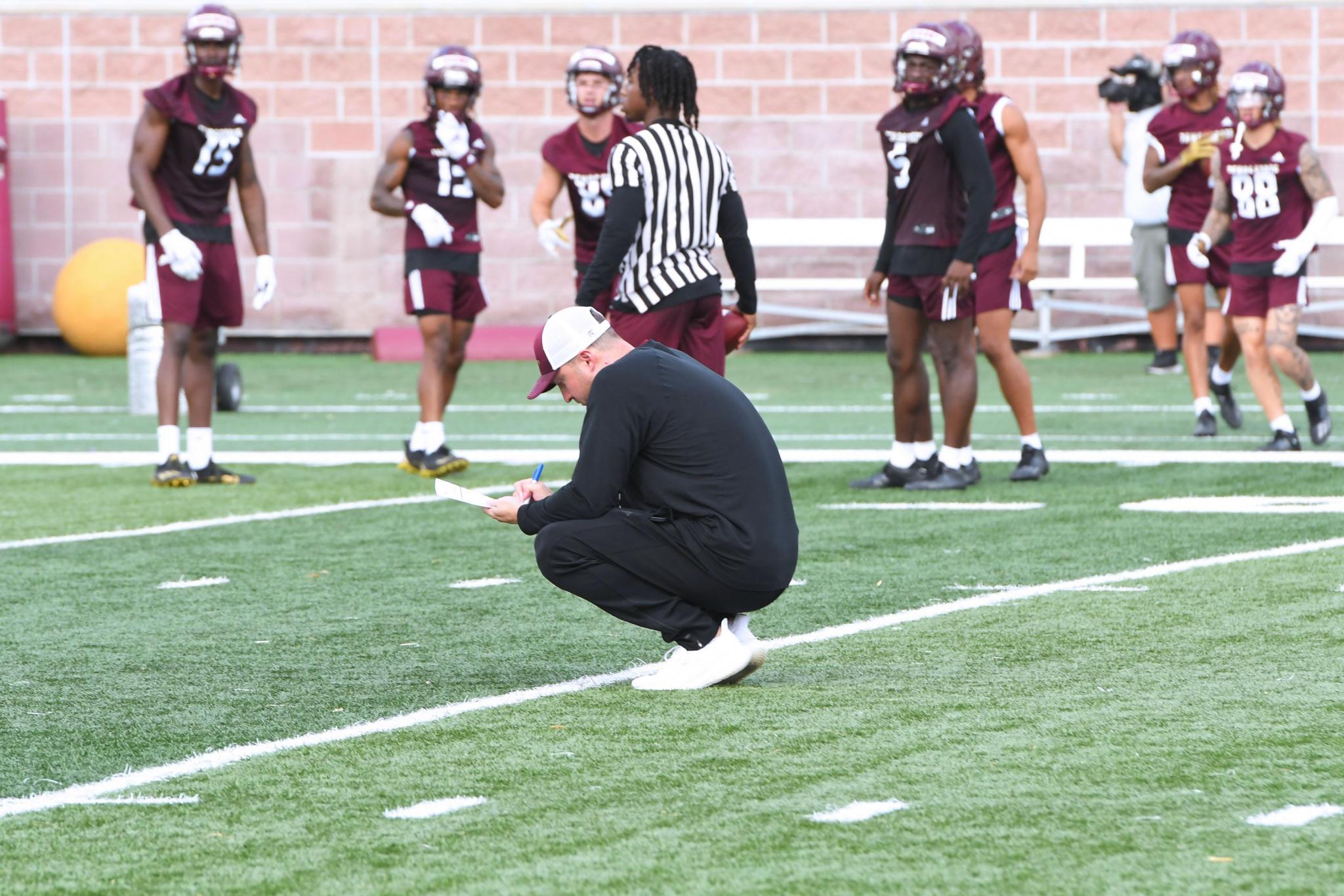 Texas State football and head coach Jake Spavital are closing in on the end of fall camp.

In comparison to the first two weeks of preparation, the Bobcats’ focus has shifted from evaluating the entire team to more of a handful of individual players. For many veterans who have multiple years in the program like redshirt junior safety Tory Spears, junior outside linebacker Jordan Revels, and redshirt junior runningback Jahmyl Jeter, rep counts are significantly reduced. That’s because the program knows what they can do — Spavital and his staff are trying to see more of what the additions’ skillsets are, giving the majority of reps to them.

“Overall, I think we’re progressing as a team,” Spavital said. “I talked last time about (the offense and defense) going back and forth and that still continues right now. Both sides are responding every practice, (and) I love to see that. We’re starting to pull back on some of the guys that already have made the depth charts, the guys that have started here for a long time, you know, we know what they’re capable of doing. So we’re getting a lot of evaluations on a lot of other kids right now. Today it was practice 11, tomorrow, we’ve got a recovery day and then we’ve got three more practices left on Thursday, Friday, (and) Saturday, and then we wrap up fall camp. So it’s almost here, it’s upon us right now, but we still got to get a lot of evaluations out of these (last) three days.

“So we’ll go full pads on Thursday and uppers on Friday, and then we’ll end it with full pads as well on Saturday. School starts on Monday, and then we’ve got our mock week, (which is) just getting them acclimated to their class schedules and their daily routine throughout the course of the week, so there’s no distractions on game week. And also during mock week is when we start to solidify our depth charts and scout team so there’ll be some difficult conversations, you know, really occurring on Monday of next week.”

From an overall team standpoint, the maroon and gold have two key factors they want to improve on before heading into game week preparation for Nevada. They also happen to be crucial to winning football games — getting off the field on third down and eliminating turnovers on offense.

“We’ll do some scripted practices where we slow it down and we work certain scenarios, (and) offensively speaking we need to minimize our negative plays,” Spavital said. “That was something that I’ve been (putting) a big emphasis on, and we were really bad last year in negative plays. I think if we can at least minimize damage — you can’t call perfect plays and you can’t call (a) perfect game — but whenever there is an issue, you need to minimize the damage. You can’t be moving backwards and I think that’s something with us. When we get in a rhythm I think we’re a pretty good offense, but when we’re inconsistent we got to avoid those negative plays. What I’ve been doing every practice is (marking negative plays). If it’s an incompletion I’m fine with that, but the sacks and the negative yard runs and just kind of (the) little things that we can control (we need to eliminate).

“(For the) defense, it’s the third downs. That was something that they’ve been wanting to improve on,” Spavital said. “And that was something that we were pretty poor at last year at times. They’re exceptional with first and second down. But when it got to that third down, that was the Achilles heel of the defense. So that’s kind of been the emphasis that we’ve had. Now there’s a lot of other things that you’re going to improve on — depth, and I think the competitions will solidify out all that — but from just a schematic scheme standpoint and from the X’s and O’s side, we need to eliminate negative plays offensively and we need to be better on third down defensively.”

Probably the hottest topic throughout fall camp position-wise has been the Bobcats’ quarterback battle.

For Spavital and his coaching staff, the position hasn’t gotten any clearer over the course of fall camp. With the arrival of redshirt freshman Baylor transfer and Argyle product CJ Rogers over the summer, the ‘Cats have moved from evenly repping redshirt sophomore Ty Evans and redshirt junior Layne Hatcher with the first-string offense to splitting it three ways between Hatcher, Evans and Rogers.

Although Texas State expects to name a singular starter sometime over the next two weeks, the decision has evolved into a three-man race rather than just Hatcher and Evans.

The Bobcats will finish out fall camp Saturday and head back to the books as well as the field when next Monday comes around. The maroon and gold will begin preparing for their matchup with Nevada on Aug. 29 before Texas State travels to Reno, Nev., to face off with the Wolfpack on Sept. 3 at 4:30 p.m.