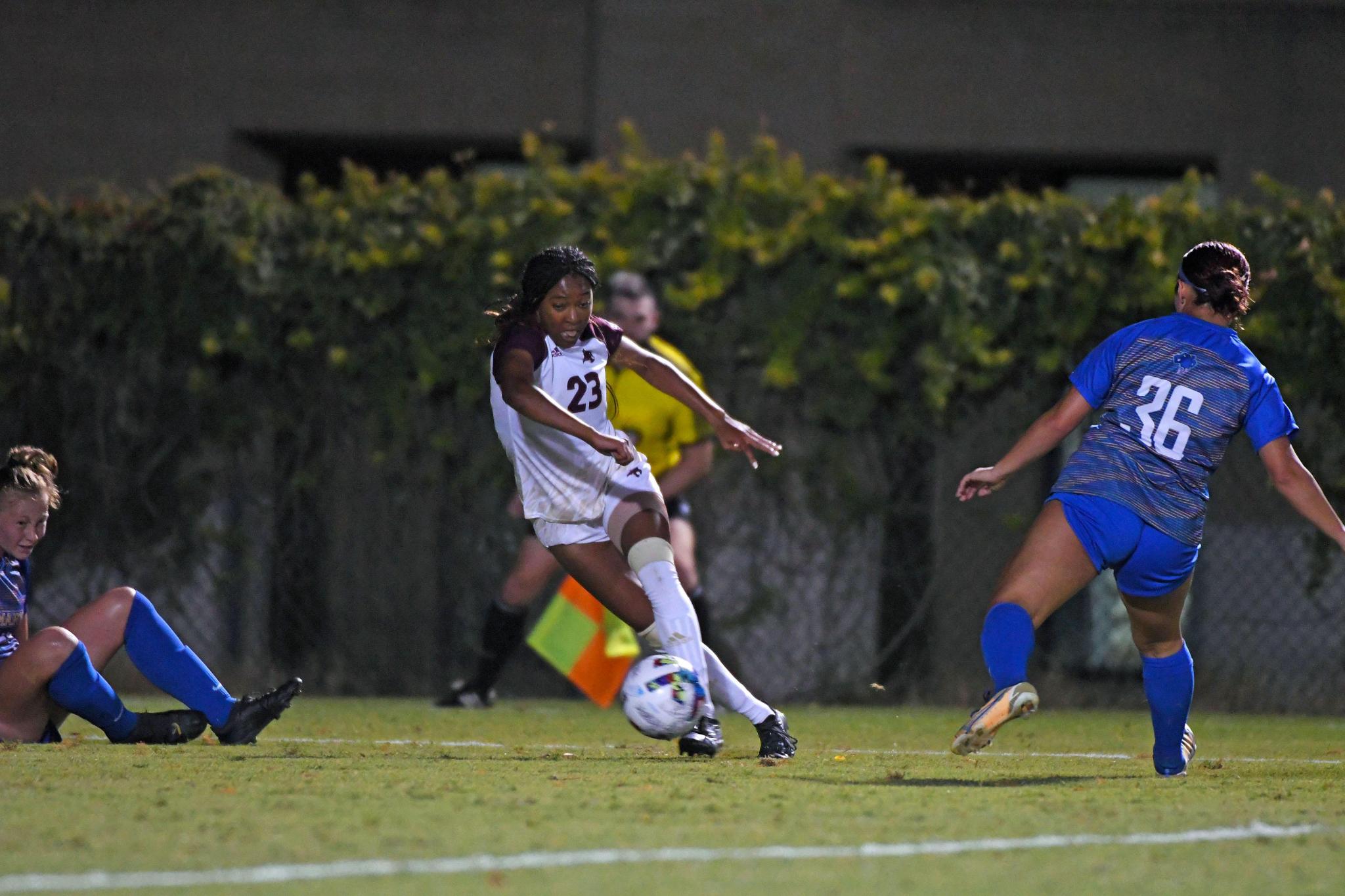 Bobcats handle Cardinals 3-0, score twice in first half of match with UIW

The Bobcats made the offensive strides they wanted against Incarnate Word (UIW).

Texas State bested the Cardinals 3-0 Sunday evening, scoring two goals in near back-to-back minutes of the first half as well as another in the second. After the ‘Cats put up 28 shots while only hitting the back of the net once in their season opener, Sunday’s offensive efficiency was welcomed by first-year head coach Steve Holeman.

“We were definitely a little more efficient tonight,” Holeman said. “I don't know how many shots we had, but to get three goals against a good team (in UIW) I thought was very good. So we're getting better every day. I liked our effort, liked (how we had a) little bit more composure in the final third. So I thought it went really well tonight.”

Junior Wimberley Wright scored the Bobcat’s first goal of the match from the top of the goalie’s box in the 28th minute with sophomore Madi Goss tossing the assist. Bailey Peschel came off the bench for Texas State and was able to capitalize on her offensive prowess scoring in the 30th minute after putting up four shots in the season-opener.

Goss also got a goal of her own later in the match, scoring the ‘Cats’ third goal of the night in the 55th minute off a penalty kick.

“My goal was a (penalty kick), so I was a little nervous, but I just picked the right corner and went for it.” Goss added.

Despite the dominant win, the maroon and gold’s objective throughout non-conference play is less about wins and losses — it’s more about continuing to get better every game before Texas State’s conference schedule begins.

“We’re always looking to get better,” Holeman said. “Defensively, I think we gave up a couple counters. We were a little careless sometimes in the back, we got to be good with our cover. Our first-time clearances weren't as good as we needed it to be. And even with that said, I think their keeper made some pretty good saves where we did a good job of framing the goal. I think we could have still probably put one more in the back (of the net).

“They played a pretty high backline, and we were offside at least five times. So that's something that we haven't really worked on a lot, but obviously something we need to get better at if we play a team that does that.”

Defensively, the Bobcats forced another shutout against their second opponent of the year, but this time with junior goalkeeper Beth Agee holding down the box.

“It's been great. So we have two keepers (Chrisman and Agee), they each pitched a shutout — one Thursday, one (Sunday) — so it's been fantastic. You always want to keep a clean sheet if you can. Our defense has held strong and I really think we learned a lot. This really comes back to playing two tough preseason games (against Oklahoma and UTSA) and learning from those games and taking it into the regular season.”

The Bobcats will travel to the Texas coast this Thursday to take on Texas A&M-Corpus Christi in the team’s first road match of the season at 7:30 p.m. They’ll look to continue their strides from the first two matches of the season, while Holeman and his staff will proceed in evaluating and tinkering with their new squad.

“We'll watch video of course, we'll get a little scout on them,” Holeman said. “It's gonna be a bit of a different game. They play on turf so the game’s a little different, but we are familiar with them. I was in the same conference with them (at Lamar). I know they're very good. They're competitive, especially at home. So we'll need to keep improving if we want to get a result down there.”