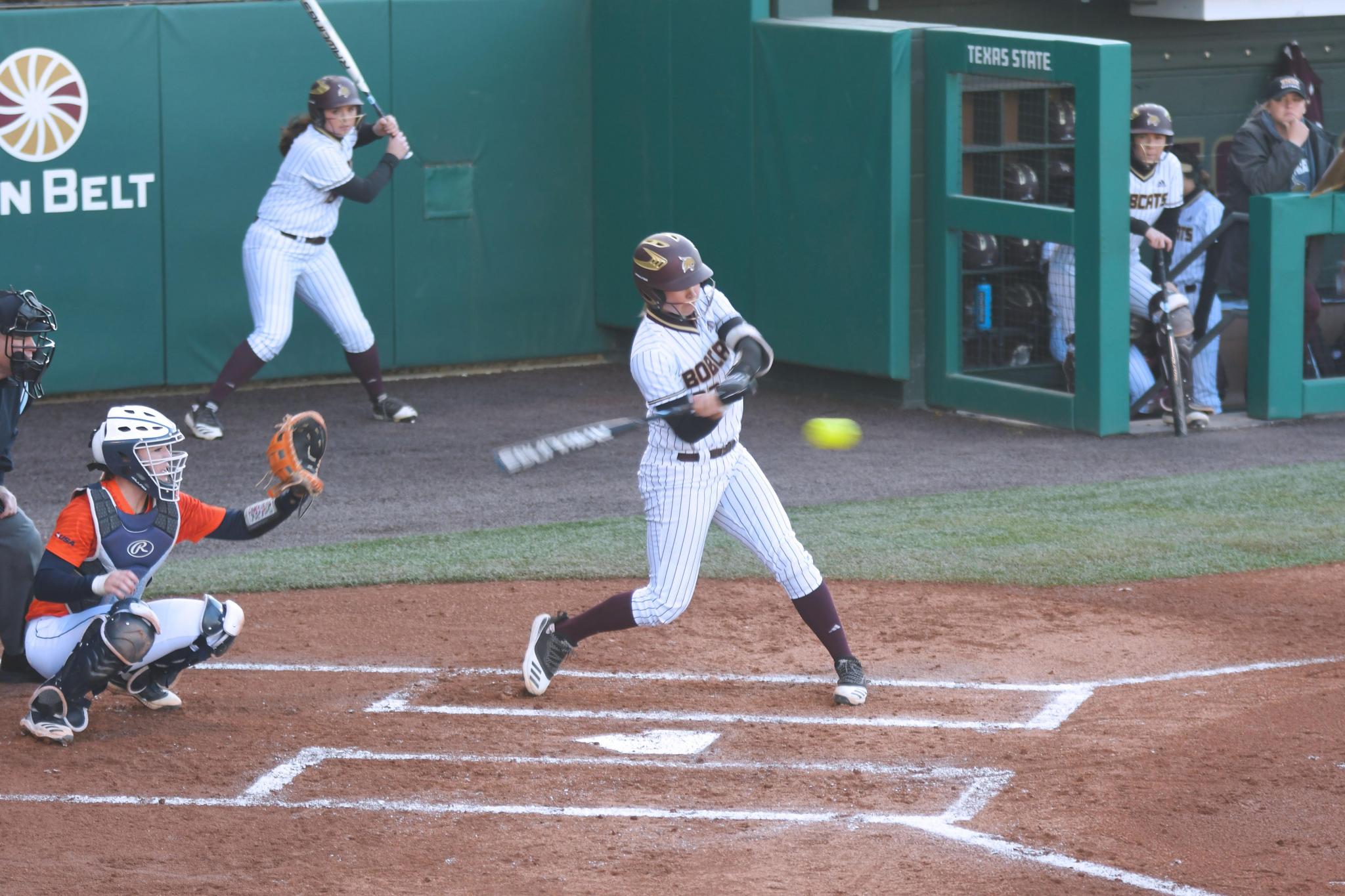 Bobcats looking to make most of second chance in 2021

Hailey Mackay tried not to get her hopes up. She’d already lost one season and didn’t want the feeling of losing another.

Texas State’s 2020 season came to an abrupt end on March 16 when the Sun Belt Conference decided to suspend all spring sports due to the COVID-19 pandemic. The Bobcats were just starting to hit their stride, winning its league-opening series at Georgia State and narrowly losing to Texas A&M on March 11 in the final four games of the year.

Mackay, one of four seniors on the maroon and gold roster, took the end of the season harshly. There were rumblings that the NCAA might extend all athletes an extra year of eligibility, but it wasn’t a guarantee. She kept her mind off of it. There was a good chance she had played her last softball game.

But while at lunch with her dad on March 30, the news came in that the NCAA would, in fact, grant all spring athletes another year of eligibility.

“I just remember, my whole mood immediately changed,” Mackay said. “And I knew that I would regret it forever if I didn't take it.”

Mackay and senior right-handed pitcher Dalilah Barrera were the only two seniors to take advantage of the provision, though. Senior outfielder Christiana McDowell already had plans to get married and start her career after the semester — another season wasn’t in the cards for her. And senior second baseman Bailee Carter didn’t want to weather the physical toll that another year of softball would place on her.

But with a few tweaks, head coach Ricci Woodard feels like the team can get right back to where it was before it ended the season with a 15-9 overall record. Or maybe even farther.

She’s not the only one, either. The Bobcats were voted to finish third in the Sun Belt Coaches Poll with 72 points.

“I think this year's squad, we just have so much energy,” Barrera said. “We have a lot of fun on the field and I think that's what's gonna enlighten us each game and keep us in the game, keep us focused. So I think our energy is the best thing that we have right now. And I know it's gonna help us stay in it during season.”

Among qualified players, Texas State brings all of its top four hitters back in junior shortstop Tara Oltmann, who led the team with a .377 average, junior outfielder ArieAnn Bell, who led the team with 18 RBIs and a .807 slugging percentage, Mackay and returning freshman infielder Sarah Vanderford. And the team will bring in another big bat in freshman infielder Baylee Lemons, who Woodard said hit for around .350 in fall scrimmages.

But the Bobcats’ true strength last year came on defense, where they ranked third in the Sun Belt with a .960 fielding percentage, first in the conference 1.62 ERA and gave up just 43 runs in 23 games.

Mackay will retain her spot at first base. Oltmann, who was voted to the Preseason All-Sun Belt Team, will do the same at shortstop. Vanderford is converting from third base to second to fill in Carter’s old spot. And Woodard has big expectations for freshman Piper Randolph, who will take over centerfield after McDowell’s departure.

Texas State’s entire pitching rotation of Barrera, junior Meagan King and returning freshman Tori McCann will be reinstated as well. Each player posted five wins and an ERA below 2.00. Woodard also said true freshman right-hander Jessica Mullins has been eating the team’s lunch in practice — “which I don't know if it's a good thing offensively” — and could get into the mix as well.

“I really believe that if we do our job all across the board, we have what it takes,” Mackay said. “I mean, our pitching staff is incredible. We have so many players that can play so many positions. And we have more power and speed than I think we've ever had. And it's just gonna be a matter of buying into that and doing our job.”

The start of the maroon and gold’s 2021 season has already been pushed back twice. It’s been especially unfair to a group that was one of the most impacted by the pandemic.

But Texas State is set to finally take the field again Monday when it hosts Abilene Christian inside Bobcat Softball Stadium for a doubleheader starting at noon. And the team is ready to play each game like it could be its last.

“I'm just so excited,” Mackay said. “Honestly, you never know when your season's canceled like that if you're going to get the opportunity to do it again. So I just feel really grateful to be here and I'm excited to get back out and compete with the girls.”

“Man, I love this team. And I don't say that every year if you guys know me,” Woodard said. “So yeah, this team loves to be out here, they love what they're doing, they have a lot of fun. I think we have all the elements … If we figure out how to put it all together, we're gonna be really good. So again, it's a crazy year, so everything could go wrong and everything could go right. But this has been a fun team to coach.”