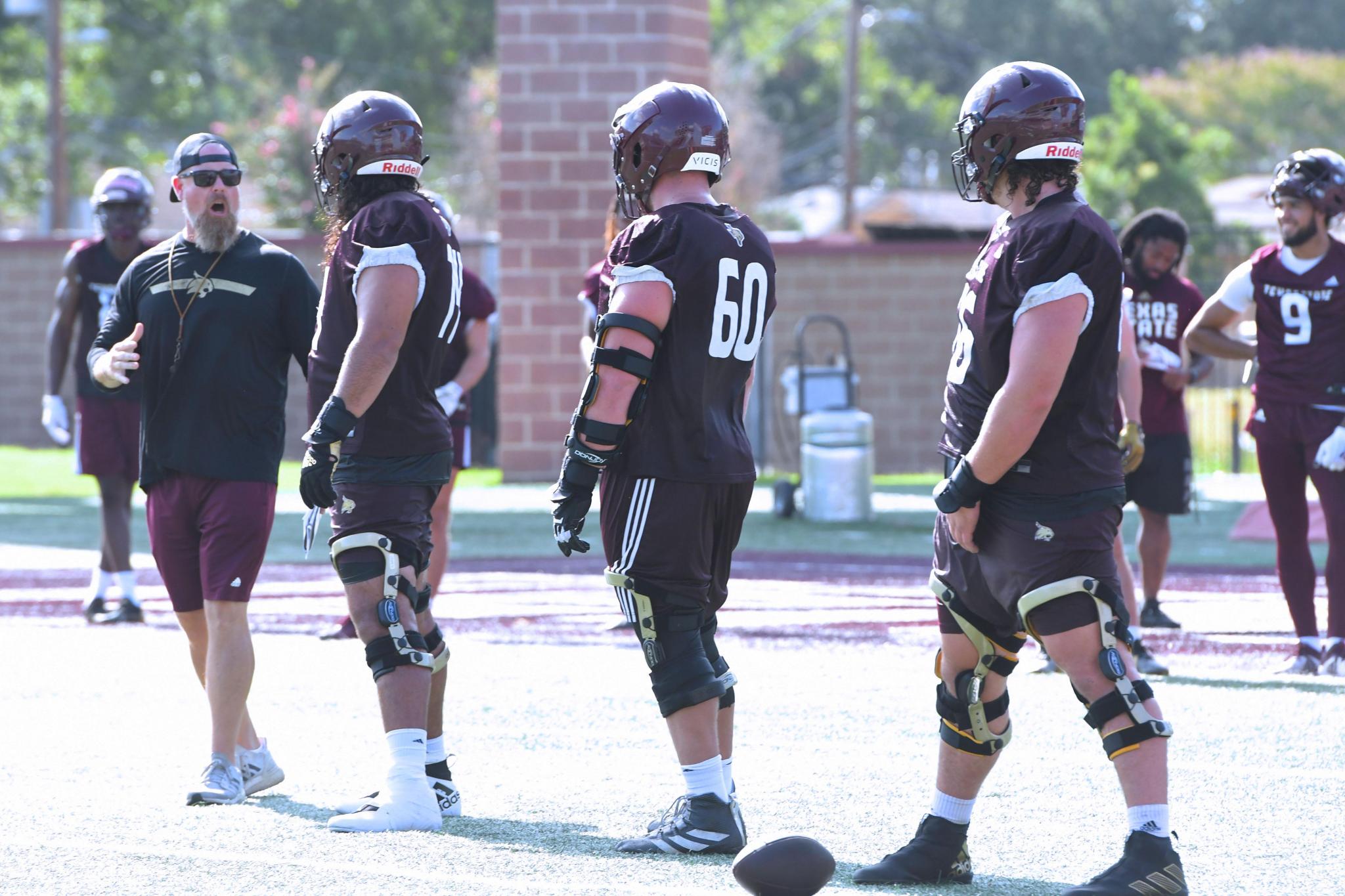 Bobcats prepare for Nevada, ready to kick off 2022 season

The Bobcats are heading into their first game of the 2022 season on the road against Nevada (1-0). The maroon and gold will travel to Reno, Nev., for the first time in school history, with the matchup being just the second all-time between the Wolfpack and Texas State on the gridiron.

Nevada is going into the game with a leg up on the ‘Cats reps-wise, after the Wolfpack beat New Mexico State 23-12 in their week zero matchup on Aug. 27. Nevada’s potent rushing attack led the way to the Wolfpack’s victory, with the senior running back tandem of Devonte Lee and Toa Taua combining for two touchdowns and 170 yards on 32 carries.

“I know they’re working through a few things with the quarterback play early. You know, we’re preparing for both (Cox and Illingworth), I think they said they’re gonna announce a quarterback after Thursday’s practice,” head coach Jake Spavital said. “But you know, it comes down to stopping that run game. I think those running backs are special — they’re tough, they’ve ran a lot of plays, they grinded it out — what they’ve done is they put a lot of speed on the perimeter. That’s very scary. They’ve got some good transfers. Kids from Arizona and Oregon that are proven players, and you’ve got the slot receiver (Jamaal Bell) that’s been there for a while. He’s a very dangerous guy (and) he’s a great kick returner as well.

“(They’ve) got a Lou Groza award nominee kicker (in Brandon Talton), they’re solid across the board. It’s gonna be a tough challenge for us. Because they’re not going to shy away, they’re gonna play with great effort, and they’re gonna make you earn everything because everything’s gonna be contested on all three phases of the game.”

The maroon and gold will head into Saturday night with a new field general under center in redshirt junior Arkansas State transfer Layne Hatcher. Spavital has said Hatcher’s work ethic tops every quarterback he’s ever worked with, and his experience and path to Texas State make his first start even more intriguing. Despite the Bobcats’ exciting new weapons, Spavital believes the key for his offense is matching the Wolfpack’s physicality.

“We have to match their physicality, I think they’re a very physical team. They’re a very big team — they’re a lot bigger than we are,” Spavital said. “Across the board, they’ve done a lot (to get) size on the defensive line. You know, they’re six-seven 280 pounds at positions, they’re big guys. Now (we’ve) got to match their physicality. You watch their spring game, you don’t have much tape on these guys, but they’ve got a good mix of (knowing) when to pressure you (and) when to be aggressive. I think it’s gonna be a good challenge for us, but to me, it’s about playing with effort and trying to match the physicality that they play with (defensively).”

While the Bobcats will have to match Nevada’s physicality, they do feel like they can win their matchups — especially at the skill positions.

“I’m confident in every guy we have in that receiver group,  inside (or) outside,” Hatcher said. “I feel confident about almost any matchup we get most of the time. So obviously, there are certain things that guys do better. So we just want to get them in those situations where they’re the most comfortable as much as possible.”

The Bobcats will head to the silver state this Friday before facing off with the Wolfpack in Mackay Stadium on Sept. 3 at 4:30 p.m. to kick off Texas State’s 2022 football season.