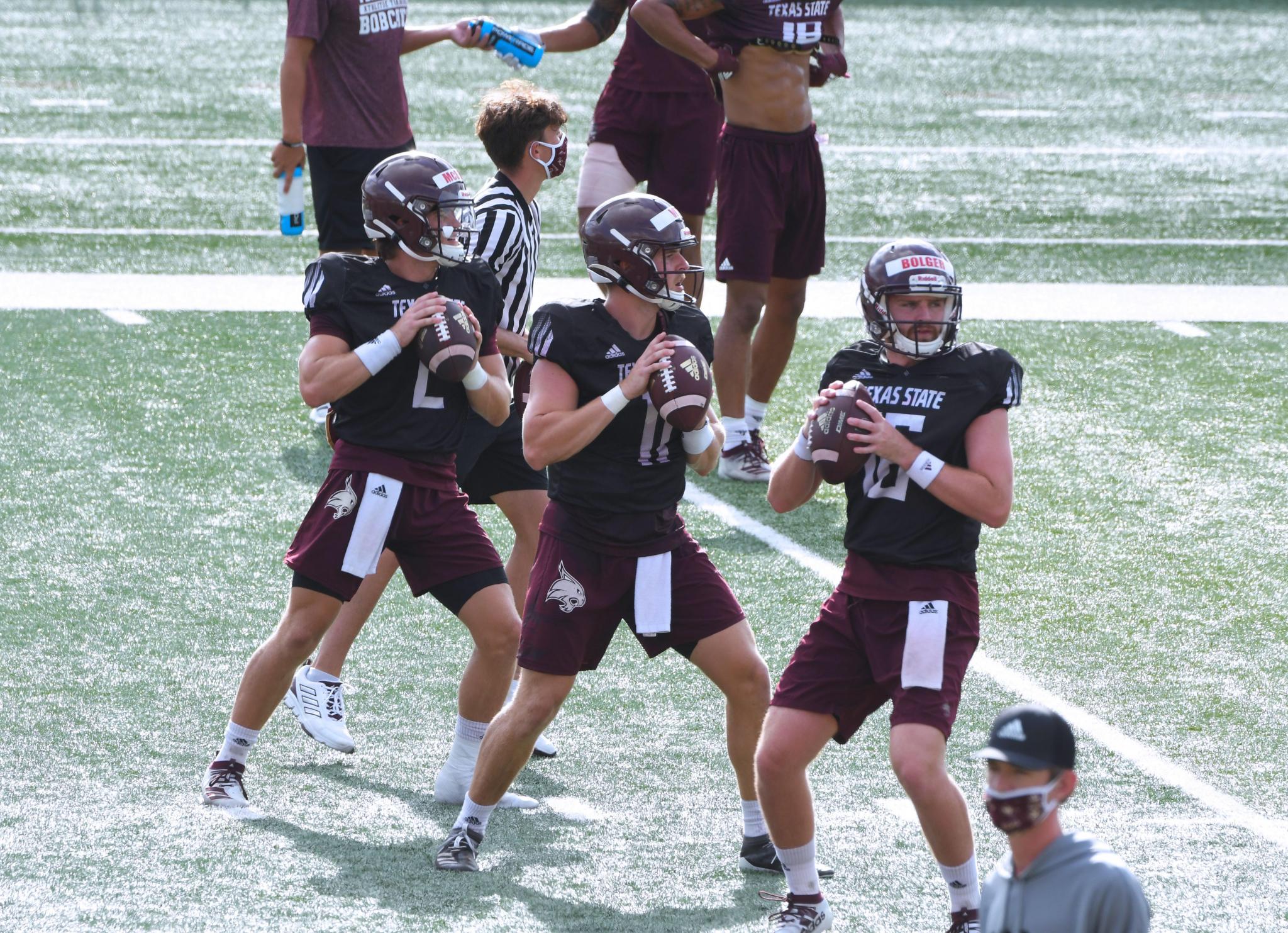 Texas State head coach Jake Spavital originally intended this week of practice to be the team’s mock game week, with the Bobcats’ season opener against SMU scheduled for Aug. 29.

But with the game getting moved back to Sept. 5, the team will use this week to fine-tune its installs and depth chart instead.

“We’re really going on our Tuesdays, Thursdays, Saturdays where we’re actually getting a lot of work in this week,” Spavital said. “And then on our Monday, Wednesday, Fridays, it’s more about recovery, installations, walkthroughs, individual techniques, working on fundamentals.”

Spavital said one main focus for the team would be to shake the rust off players who had to sit out for portions of fall camp. Multiple players dealt with soft-tissue injuries while practicing in full pads. Tuesday’s practice allowed them to make up some of the time they missed.

“We decided to just try to get a lot of these kids back in the swing of things,” Spavital said. “Waydale Jones, who’s a receiver that transferred in, he had a hamstring injury. (Senior offensive lineman) Reece Jordan was one that sat out earlier. Got a lot of soft-tissue injuries, like (sophomore defensive back) Tory Spears was kind of banged up at the beginning of fall camp and now he’s out there running a lot, blocked a kick today. (Redshirt sophomore receiver) ‘K-Dot’ (Jah’Marae Sheread) was out a little bit, (redshirt sophomore tight end) Blake Aragon was out a little bit, so they weren’t getting the full fall camp like most of them did.

“So, you know, we’re getting them quality reps and I’m calling plays that they haven’t ran yet. So you know, sometimes it’s not the right scenario, situation to run them in but we’re still throwing them in these spots just so they can get out there and see it and actually run through it, have the visualization of it. You know, (junior offensive lineman) Alex Costilla is going back and forth, he was out a couple practices and he’s back out there running around … It’s really a good amount of people getting back. (Freshman receiver) Jaycob Horn, he was out there as well. So it’s really good for everybody.”

The other chief focus is to solidify the back end of the Bobcats’ depth chart. Spavital said nearly all of the starting positions have been settled but that may of the backup spots are still up in the air.

Spavital said it’ll be important to find out how to maximize the talent they have on the roster.

“It’s all about contingency plans,” Spavital said. “Injuries occur in this entire game, as we know, and we’ve got to be ready to put our best 11 on each side of the ball.

“I think, what the true key to football is, is that injuries will occur and will you keep the same momentum that you currently had with the initial starters when you start moving positions around? That’s what we’re trying to accomplish.”

Spavital hopes to have the final touches on the two-deep by the end of the week. That includes the quarterback spot, in which the head coach is deciding between incumbent starter Tyler Vitt and Memphis transfer Brady McBride. Spavital said its been a close battle for the starting job and the team is analyzing every live snap the two have taken during camp to see if either has a statistical edge over the other.

“Just to make sure we’re doing it the right way. And I’m a big believer that numbers don’t lie. Like, if you put a guy in a situation for a long enough time, you’ll see the stats kind of work itself out,” Spavital said. “It takes a long time to do that, too. I wish you could just press a button and stats popped out. It doesn’t work that way.”

Texas State will alternate between recovery days on Wednesday and Friday and work days on Thursday and Saturday before beginning the mock game week on Sunday. Spavital’s been pleased with the work his players have put in.